Each year the U.S. Department of Housing and Urban Development (HUD) publishes a list of difficult to develop areas (DDAs). Low-income housing tax credit properties located in areas that are designated as DDAs are eligible for a 130 percent boost in eligible basis for determining the amount of LIHTCs a building can generate.

When calculating DDAs, which includes SDDAs, HUD uses a ratio of fair market rents (FMR) divided by the maximum income of eligible tenants (the DDA ratio). The DDA ratio is a proxy for the difficulty of development in terms of construction cost relative to area income – therefore the higher the DDA ratio the more difficult it is to develop in the area. HUD sorts the DDA ratio from highest to lowest then starts at the top of the list and designates areas until 20 percent of the population is in DDAs. HUD sorts and designates rural and metro areas separately.

When calculating the DDA ratio, HUD uses the prior year’s FMR and income limits. For example, HUD used the 2016 FMR and 2016 income limits to determine the 2017 DDA ratio. Therefore, the information necessary to calculate the 2018 DDA ratio was available once HUD released the 2017 income limits in April (the FMR data for 2017 was released in late 2016).

When HUD is determining how much population to count against the 20 percent cap it would use 24,557 as opposed to 26,599 for this area.

Unfortunately, it’s not yet known which areas will be designated as QCTs for 2018 or the population for those areas. Therefore, for this sort Novogradac assumed that QCTs would remain constant and have removed the population of these areas in 2017 from our 2018 sort. This means that there is a strong likelihood that the last few areas excluded or included in our prediction actually may be added or removed from the designated list when HUD publishes the official DDAs. 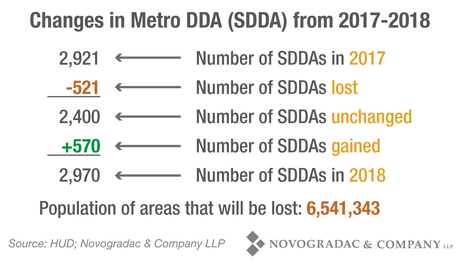 The number of areas gained and lost is consistent with the change in SDDA between 2016 and 2017 (592 areas lost and 637 areas gained). However, this analysis reveals an interesting finding. Many people believe that it is only those areas that are on the fringe (the bottom 5 percent of the designated areas) that are in jeopardy of being dropped from year to year, however, this is not the case. For example ZIP code 07936 in the Newark, N.J. HMFA had one of the highest DDA ratios for 2017 and was the 205th area designated (top 2 percentile). In 2018, this area’s DDA ratio dropped so that it barely fell out of the top 20 percent (20.846 percentile for 2018). ZIP code 91905 in San Diego, Calif. had an even more drastic fall; that area fell from the 17th percentile all the way down to the 82nd percentile!

Novogradac’s analysis predicts the following changes in SDDA by state: 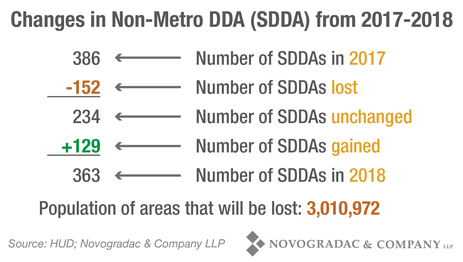 Novogradac’s analysis projects non-metro DDAs will have a great bit of variability in 2018. Almost 40 percent of the areas in 2017 will not be DDAs in 2018. Similar to metro DDAs, there are areas with a large change in their DDA ratio. For example Elbert County, Ga. was in the top 11th percentile and fell all the way down to the 34th percentile.

More detail, including the complete sort, is available for purchase. Contact Thomas Stagg for more information. The sort will also be made available upon request to members of the LIHTC Working Group.

As discussed in a Notes from Novogradac blog post titled Basis Boost Provisions Could Lead to More 4 Percent Developments and More Investment in High Cost Areas, the Affordable Housing Credit Improvement Act of 2017 (AHCIA) has various provisions that would impact the number of DDAs. If the AHCIA was passed as currently proposed, the population cap for DDAs would be increased to 30 percent, which result in almost 1,700 additional metro areas designated as SDDAs and 140 non-metro counties designated as DDAs.

As detailed in the post New Novogradac Mapping Tool Illustrates DDA, QCT Changes for 2017, developers working on a potential LIHTC property in a location losing its designation may still be able preserve the 30 percent boost. HUD describes this approach as extending the effective date. The main requirement is the proposal must have been the subject of a “complete” application, meaning no more than de minimis clarification was required for the allocating agency to make a decision. The agency will decide what counts as a complete application for this purpose. There are additional subsequent deadlines later in the process.