President Biden Renewed Commitment to Clean Energy Tax Credit Expansion in State of the Union, Including Stand-Alone Energy Storage, which Could Increase Investment in Clean Energy

Biden said, “Let’s provide investment tax credits to weatherize your home and your business to be energy efficient and get a tax credit for it; double America’s clean energy production in solar, wind, and so much more.”

While the Build Back Better Act (BBBA) containing Biden’s clean energy proposals is currently stalled due to concerns from Sen. Joe Manchin, D-West Virginia, about the scope of the $2.2 trillion iteration of BBBA, the $325 billion clean energy tax incentives the bill contains continue to have strong support from the administration and Congress, including Manchin.

Even though the clean energy generation priorities have gained the most attention, the need for clean energy storage is a growing priority. The Biden administration has set a goal of achieving 100% carbon pollution-free electricity in the United States by 2035, and expanding clean energy storage is needed to achieve this goal. The Biden administration has also set a goal of permitting 25 gigawatts of solar, geothermal and onshore wind energy capacity on public lands by 2025. Increasing the storage capacity of renewable energy will help attain this goal. The Unites States has made initial progress towards increasing its storage capacity, as $1.5 billion was invested into storage, thus installing 3.5 gigawatt hours of new storage capacity in the United States in 2020. More information about the Biden administration’s clean energy goals can be found in this previous Notes from Novogradac post.

Installation of Clean Energy in 2021

Texas saw the highest amount of clean energy installation in 2021 followed by California: 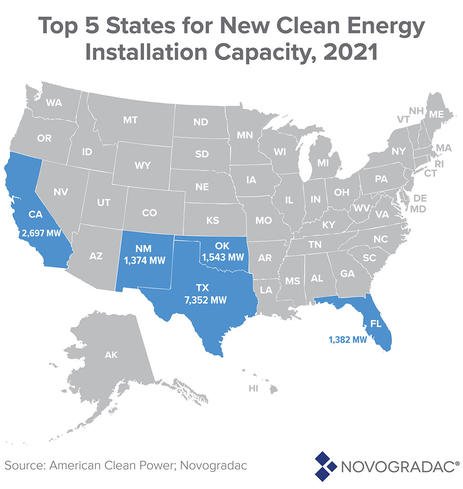 Clean Energy Capacity by State in 2020

The chart below lists the percentage of wind and/or solar energy produced by each state in 2020, according to the United States Energy Information Administration:

To best ensure a storage project will qualify for the ITC as it stands, it should only use solar energy from a single solar project and both the battery and solar facility should be installed simultaneously. The battery also should be located on the low-voltage side of the main transformer and the whole project should be owned by the same taxpayer. These requirements limit the amount of storage projects eligible for the ITC, but creating an ITC for storage and/or expanding the ITC to fully cover storage would help to spur additional investment into storage.

As the regulations currently stand, there are limitations to what storage projects can claim the ITC. One cannot claim the ITC on part of a project and the renewable energy production tax credit (PTC) on another, so it is not recommended to combine a solar project that claims the ITC and a wind project that claims the PTC. At the moment, there isn’t incentive to currently combine wind PTC deals with storage. However, recently proposed legislation could expand the ITC to include more storage projects.

The clean energy proposals in BBBA also include a proposal to allow the ITC to finance stand-alone energy storage, but as mentioned above, the BBBA is currently stalled in the Senate due to Manchin’s concerns. Whatever the fate of BBBA may be, there remains a decent possibility that ITC expansion, including the eligibility for stand-alone storage, will advance and be a key component of Biden’s clean energy priorities.