In 2014, 19 percent of Alabama’s nearly 5 million residents lived in poverty, including more than 300,000 children. While the housing downturn in 2008 took longer to hit Alabama than some other states, recovery has similarly been slow to come, with tax revenues still lagging nearly 9 percent off the pre-2008 levels. Housing units in multi-unit structures comprise more of the total housing stock in Alabama (26 percent) than in the country as a whole (16 percent).

In June 2015, the Alabama Housing Finance Agency approved $85 million in low-income housing tax credit (LIHTCs) for 19 affordable rental housing developments. Eleven of those were new construction and 8 were for rehabilitation of existing properties. In 2013, 91 percent of LIHTC allocations in Alabama went to developments in rural areas and 40 percent were for the elderly. To understand Alabama’s LIHTC priorities, the state’s qualified allocation plan (QAP) is here. 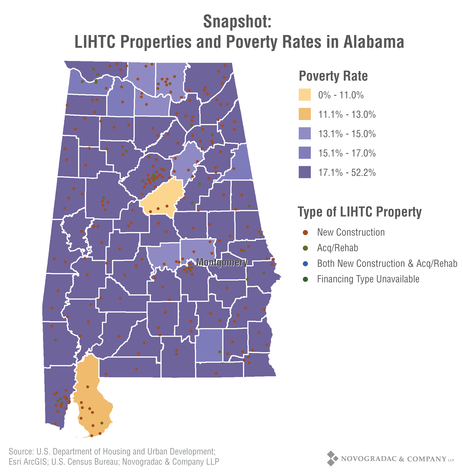 The LIHTC, new markets tax credit (NMTC) and historic tax credit (HTC) have combined to assist in the creation or rehabilitation of 1,100 developments and the addition of more than 55,000 jobs in Alabama. For other impacts the credits have had in the state, see the table below.

The American Wind Energy Association (AWEA) reports that states like Alabama with lesser wind resources are now taking advantage of wind energy through long-term power purchase agreements (PPA) that import wind energy from wind rich states. Alabama Power, the largest utility in the state, has signed two PPAs for 404 megawatts (MW) of wind power from Oklahoma and Kansas. AWEA also says there are nine active manufacturing facilities in the state producing products for the wind industry.