While hot housing markets can be indicative of healthy economies, they sometimes also pose challenges for low- and moderate-income renters looking for affordable housing. In Hawaii, however, the economic picture and housing conditions for Hawaiians are both positive. In 2014, 11 percent of Hawaii’s 1.4 million residents lived in poverty, including nearly 13 percent of children, giving the state the 5th and 4th lowest rates in these respective categories nationally. Nearly 54,000 households in Hawaii pay more than half their income on rent. 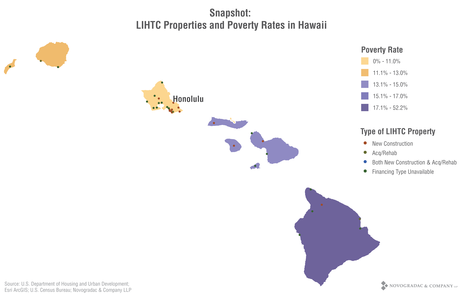 The LIHTC, new markets tax credit (NMTC) and historic tax credit (HTC) have combined to assist in the addition of more than 12,000 jobs in Hawaii. For other impacts the credits have had in the state, see the table below.

In 2015, Hawaii became the first state to commit to 100 percent clean energy. Hawaii has committed to procure all of its electricity from renewable energy sources by 2045. The American Wind Energy Association (AWEA) reports that Hawaii currently has 203 MW of installed wind capacity, 29th most nationally. There are an additional 3 MW of wind capacity under construction and in 2014, the wind energy industry in Hawaii supported as many as 100 jobs either directly or indirectly.

There were 107 MW of solar capacity installed in Hawaii in 2014. The 497 MW of solar energy currently installed in Hawaii ranks the state 7th in the country, according to the Solar Energy Industries Association (SEIA). SEIA says several large retailers in Hawaii have gone solar, including Macy’s and Target. Safeway has installed one of the largest corporate photovoltaic systems in the state with 332 kW of solar capacity at their location in Ewa. There are currently more than 115 solar companies at work in Hawaii, employing 2,200 people.