In 2014, 15 percent of Illinois’s 12.6 million residents lived in poverty, including 20 percent of children, ranking the state 25th in those measures nationally. The U.S. Census reported that in 2013 Illinois ranked 49th in unemployment rate. In 2014, 441,790 households in Illinois paid more than half their income on rent.

In 2015, the Illinois Housing Finance Agency approved more than$205 million in low-income housing tax credit (LIHTCs) for 22 affordable rental housing developments containing 1,363 affordable rental homes. Six of the developments were in non-metropolitan areas, 13 were in the Chicago metro area and three were in other urban areas. Fifteen of the awards in Illinois in 2015 went for new construction developments, and eight were designated for elderly residents. To understand Illinois’s LIHTC priorities, the state’s qualified allocation plan (QAP) is here. 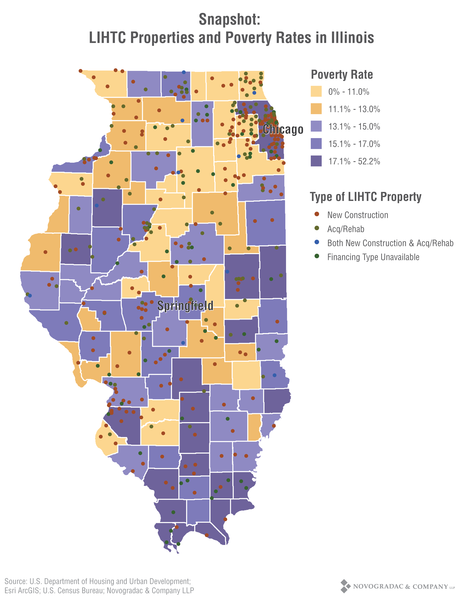 The LIHTC, new markets tax credit (NMTC) and historic tax credit (HTC) have combined to assist in the addition of more than 139,000 jobs in Illinois. For other impacts the credits have had in the state, see the table below.

There are 39 manufacturing facilities in Illinois producing components for the wind industry. The American Wind Energy Association (AWEA) reports that in 2014 the wind energy industry in Illinois directly or indirectly supported between 3,000 and 4,000 jobs. As of 2014, Illinois had 36 wind projects online, with 2,348 turbines creating the state’s 3,842 MW of installed wind capacity.

The 65 MW of solar energy currently installed in Illinois ranks the state 26th in the country in installed solar capacity, according to the Solar Energy Industries Association (SEIA). SEIA says several large retailers in Illinois have gone solar, including Walgreens. Ikea has installed one of the largest corporate photovoltaic systems in the state with more than 1 MW of solar capacity. There are currently more than 274 solar companies at work in Illinois, employing 3,500 people.

May 4, 2021: What CDEs and Qualified Businesses Should Be Doing Now to Prepare for the Next NMTC Application Round
Posted on May 4, 2021
April 27, 2021: Maximizing the Benefit of State and Local Tax Incentives and Exclusions for Renewable Energy Properties
Posted on April 27, 2021
April 20: 2021: Understanding Provisions of the Affordable Housing Credit Improvement Act of 2021
Posted on April 20, 2021
END_OF_DOCUMENT_TOKEN_TO_BE_REPLACED