In 2014, 20 percent of Louisiana’s 4.7 million residents lived in poverty, including nearly 28 percent of children, ranking the state 48th nationally. In 2005, Hurricane Katrina damaged more than a million residences in the Gulf Coast region; about half of these damaged units were located in Louisiana. In New Orleans alone, 134,000 housing units — 70 percent of all occupied units — suffered damage from Hurricane Katrina and the subsequent flooding. To encourage rebuilding and recovery, Congress passed and President Bush signed H.R. 4440, the Gulf Opportunities Zone (GO Zone) Act of 2005. While there has been rebuilding, both physical and economic, more than 170,000 households in Louisiana pay more than half their income on rent.

The GO Zone Act provided, among other things, $1 billion in additional new markets tax credit (NMTC) allocation, more than $3 billion in LIHTCs (including $1.7 billion in Louisiana) and a 30 percent increase in the historic tax credit (HTC) percentage. A 2010 U.S. Government Accountability Office (GAO) report said that by June 2009–45 months after Katrina–about 23,000 rental units in the GO Zone were funded through LIHTC equity. That number continued to grow in subsequent years. 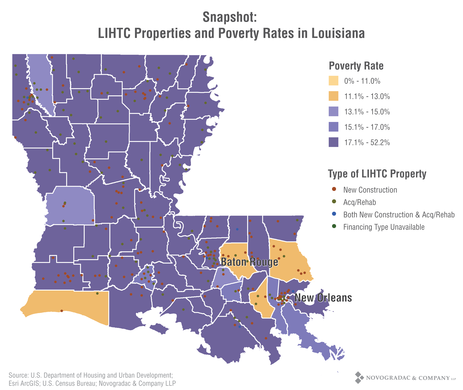 The LIHTC, NMTC and historic tax credit (HTC) have combined to assist in the addition of nearly 155,000 jobs in Louisiana. For other impacts the credits have had in the state, see the table below.

How OZs Can Support Affordable Housing Creation, Preservation
A Look at the LIHTC: Past Pricing Trends, the Current Market and Future Concerns
Is 2020 the Year to Pass Infrastructure Legislation that Includes Community Development Tax Incentives?
END_OF_DOCUMENT_TOKEN_TO_BE_REPLACED