Median income fell in three-fourths of Michigan cities over the past five years, according to the U.S. Census Bureau, which also reported that in 2014, 16.2 percent of Michigan’s 9.9 million residents lived in poverty. More than 314,000 households in the state pay more than half their income on rent. 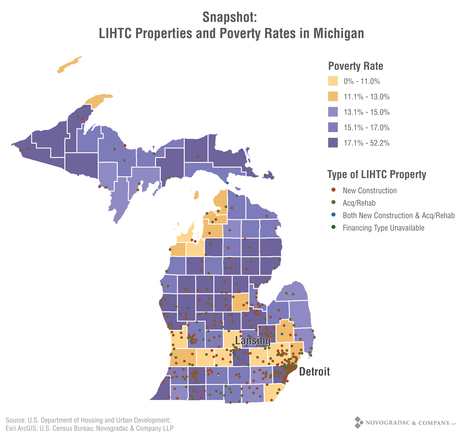 The LIHTC, new markets tax credit (NMTC) and historic tax credit (HTC) have combined to assist in the addition of nearly 135,000 jobs in Michigan. For other impacts the credits have had in the state, see the table below.

May 4, 2021: What CDEs and Qualified Businesses Should Be Doing Now to Prepare for the Next NMTC Application Round
Posted on May 4, 2021
April 27, 2021: Maximizing the Benefit of State and Local Tax Incentives and Exclusions for Renewable Energy Properties
Posted on April 27, 2021
April 20: 2021: Understanding Provisions of the Affordable Housing Credit Improvement Act of 2021
Posted on April 20, 2021
END_OF_DOCUMENT_TOKEN_TO_BE_REPLACED