At first glance, Nevada might seem like a community development and historic preservation desert. As of 2013 there were four historic tax credit (HTC) or new market tax credit (NMTC) developments completed in the state. But these figures are misleading and understate the true impact of tax credit investment. Those four projects generated nearly 700 jobs and nearly $50 million in economic activity.

On the housing front, the picture is clearer on its face: nearly 110,500 Nevada households, or about 11 percent, pay more than half of their income on rent. The state’s housing agency is working to meet that need by working with developers to create and rehabilitate housing for families, seniors, veterans and other Nevadans.

Between 2003 and 2014, only three NMTC projects were closed in Nevada. In response to this situation, and in order to ensure a more equitable distribution of NMTC across the country, the Community Development Financial Institutions (CDFI) Fund several years ago began to give a preference to applicants promising to target one or more of 10 “underserved” states, including Nevada. This approach has succeeded; states like Nevada are finally seeing more NMTC investment. In fact, The New Markets Tax Credit Coalition reports there may be another 12 deals that had closed by the end of 2015. Those deals represent more than $229 million in NMTC investments that created 1,391 full-time and 596 construction jobs, according to a recent NMTC Coalition estimate. With these recent NMTC investments Clearinghouse CDFI has financed the Lake Mead Christian Academy’s new facility in Henderson, Nev. and other Nevada businesses. The school provides infant day-care services and schooling for grades K-12.

In 2015, the Nevada Housing Division approved $66 million in federal low-income housing tax credit (LIHTCs) for 14 affordable rental housing developments. Two of the approved developments were for residents with special needs, two others for seniors, and one for military veterans. To understand Nevada’s LIHTC priorities, check out the state’s qualified allocation plan (QAP). 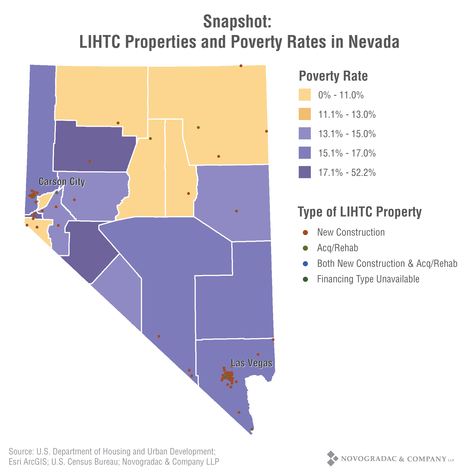 The LIHTC, NMTC and HTC have combined to assist in the creation or rehabilitation of thousands of properties and the addition of more than 30,000 jobs in Nevada. For other economic benefits the credits have created in the state, see the table below.

In 2014, Nevada installed 339 MW of solar electric capacity, bringing the total to 1,042 MW, ranking the state 5th nationally in installed capacity. There are currently 116 solar companies at work in Nevada, employing 8,800 people. The Spring Valley Wind project, 30 miles outside of Ely, Nev. is the state’s sole wind farm.