South Carolina’s economy has struggled in recent years as illustrated by the fact that nearly 14 percent of individuals in South Carolina had their income fall below the poverty level at some time during 2013, compared to 11 and a half percent for the country overall. Of all households in South Carolina, 32 percent are renters; of those, 24 percent, or nearly 136,000 individuals, are extremely low income. 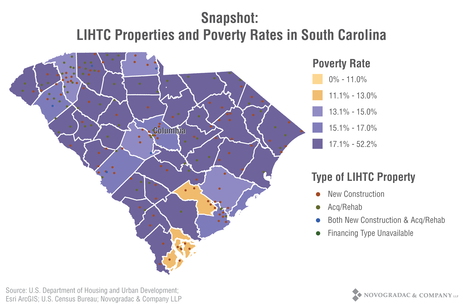 The LIHTC, new markets tax credit (NMTC) and historic tax credit (HTC) have combined to assist in the creation or rehabilitation of thousands of properties and the addition of more than 50,000 jobs in South Carolina. For other economic benefits the credits have created in the state, see the table below.

In 2014, South Carolina installed 1 MW of solar electric capacity, bringing the total to 13 MW, ranking the state 35th nationally in installed capacity. There are currently more than 51 solar companies at work in South Carolina, employing 1,800 people. While there isn’t currently any installed wind capacity in the state, but there are at least 17 facilities in South Carolina that manufacture components for the wind energy industry, including GE, which has a turbine assembly facility in Greenville. These facilities are credited with supporting between 101 and 500 jobs in 2014.