This post is part of a series on QAPs:

Under Section 42(m)(1)(B), QAPs must use certain selection criteria and also give preference to applications for developments:

The provision has no explanation of what it means to give a preference or definition of the terms used (other than QCT). Notice 2016-77 does say that the third preference “fails to apply unless ... a [CCRP] exists that contains more components than the LIHTC project itself.” 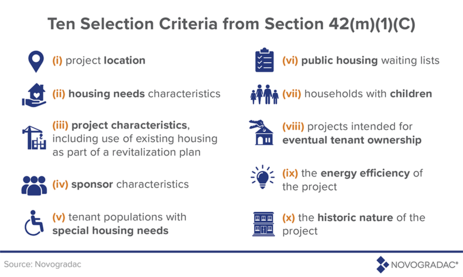 Note these 10 factors are not the same as a required preference. The federal expectation simply is to include each in some manner. Agencies do not even need to provide what might be the obvious incentives. For example, assessing negative points for proposals to convert to ownership technically complies with Section 42.

The law does not limit agencies’ ability to include other criteria.

The following are ways to consider QAP provisions.

Most agencies use numerical scoring. With this approach what matters is the variation, not the amount of points or the percent of the total available. As an illustration, assume applications earn the same score for a building a gazebo and finding a site in certain census tracts. Every submission can do the former, whereas only some can accomplish the latter. Only one differentiates. The QAP actually could award far more points for gazebos than site location and census tracts would still be far more consequential.

Some agencies do not use numbers and instead base selections on an evaluation of how the proposal and facts fit with verbal descriptions. The assessment can be by the board, a committee, staff, and/or others. A recent QAP trend along these lines is establishing an “innovation round” which allows agencies to award worthy proposals despite not competing well.

A key is understanding no method is inherently superior, any can be better or worse depending on its implementation. The closest to an exception is rewarding promises outside of developers’ control, as it’s possible to incentivize unrealistic representations. This concept is addressed further in the Creating a Competition post.

Help Rewriting QAPs Provides Opportunity for Clarity, Simplification
Rising Stars: Novogradac Spotlights Younger Leaders in Community Development
ESG Investing: Where it is Now; Where it’s Headed; What to Do
END_OF_DOCUMENT_TOKEN_TO_BE_REPLACED