The number of cost-burdened households (those paying more than 30 percent of their income on housing) aged over 65 has reached a new high of 10 million, according to "Housing America's Older Adults 2019," a supplemental report to the State of the Nation’s Housing Report, released by Harvard’s Joint Center for Housing Studies (JCHS). The report focuses on the effects that the affordable housing crisis has had on households headed by adults 50 years old and over and continues JCHS’ examination of older households, emphasizing the overall aging of the American population, as well as how this demographic is suffering from the shortage of affordable and accessible homes.

Homeowners still make up the majority of older American households, with 74 percent of those within the 50 to 64 group owning a home, and 78 percent of those 65 and over owning a home. Out of the older renters, only 22 percent live in single-family homes, while most live in multifamily housing. Out of renter households aged 65 to 79 years old, 50 percent live in apartment buildings with 2 to 49 units, while 21 percent live in larger apartment buildings. The percentage of renters over 80 living in larger apartments is higher, at 40 percent. JCHS cites the reasons for this may include accessibility features such as elevators and single-floor living, and that in general, large affordable multifamily units are more accessible than single-family homes. 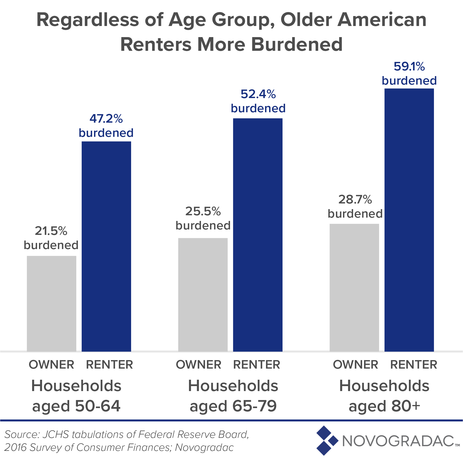 While the overall amount of sheltered homelessness (those living in an emergency shelter as opposed to cars, parks, and other places not meant for human habitation) has decreased, the rate of homelessness among older adults is growing. According to the U.S. Department of Housing and Urban Development, from 2007 to 2017 homelessness has grown more than 10 percent (from 22.9 percent to 33.8 percent) for individuals aged 50 and over. Older adults now make up 23 percent of the sheltered homeless population, up from 16.5 percent in 2007. JCHS explains this trend by citing a University of Pennsylvania study that found younger baby boomers (born 1955-1965) faced an economic downturn when first entering the workforce. This environment was created by a combination of factors: the crowded labor market from the first generation of baby boomers, downward pressure on wages, upward pressure on housing prices, and the two back-to-back recessions in the late 1970s and early 1980s. The unemployment rate of young black men in their 20s is used as an example of this economically difficult environment–it stood at nearly 25 percent in 1983, which is a rate that was nearly double the rate 10 years earlier and 10 years later. The University of Pennsylvania study argues that this left the younger baby boomers unable to catch up to the income advances of older baby boomers (born 1945-1954). This cohort of younger baby boomers are now in their mid-50s to mid-60s and they are likely to significantly add to the number of homeless older adults over the next decade.

Changes in demographics are important to note because minority senior households and households affected by the great recession are most likely to rent than own homes, and the gap between white and non-white homeownerships rates has continued to widen. The JCHS attributes this widening gap partially to growing debt levels from the great recession. Older black and Hispanic homeowners are more likely to carry mortgage debt than white and Asian households. There is already a current strain on the affordable rental housing market, and the growth of non-white older renter households will add even greater pressure on the existing affordable rental market.

The share of older American households (age 50 and over) is continuing to increase at a rapid rate, and JCHS predicts that this trend will continue. By 2038, the share of all U.S. households over the age of 65 will near 34 percent, up from 26 percent in 2018. Faster growth will occur in the 75 to 79 age group, which is expected to increase by 49 percent within the next 10 years, and then another 20 percent from 2028 to 2038. Households age 80 and over will make up 9 percent of all households by 2028 and increase to 12 percent of all households in 2038.

The proportion of older adults living alone increases with age, and individuals in this age range have lower incomes and higher disability rates than couples with the same-age demographics. Additional pressure on the existing affordable housing market will accumulate, as demand for affordable housing that includes support services will increase as the number of single-person households in their 80s grows.

The Income and Wealth Gap between Renters and Homeowners

Generally, older, wealthier households hold investments in the stock market, so this boom has benefitted the wealthy disproportionately. Compounding this growth in wealth is social security benefits. Social security benefits favor those that have a higher rate of income pre-retirement, meaning that those who made the most pre-retirement will continue to have higher rates of wealth. The median income for households aged 65-79 grew 28 percent from 2000 to 2017 and reached a 20-year high near $46,500. However, those in the younger demographic (50-64 years old) remained at the same median income level of $71,400.

This may seem like good news for those in the 65 and over age group. However, most of the income growth for the 65 and over age group went to the highest earners. The highest earners in this group had a 22 percent increase in median income from 2000 to 2017, while the lowest earners median income fell 4 percent. This trend holds for the younger households as well. Among households aged 50-64, the top earners saw their median income rise 15 percent, which is nearly double the rise in median income for the lowest 10 percent of earners in this same age group. Although some older households have seen their income rise, median rent has also risen 14 percent–from $790 per month to $900 per month. See the graph below for a visual representation of the income disparity. 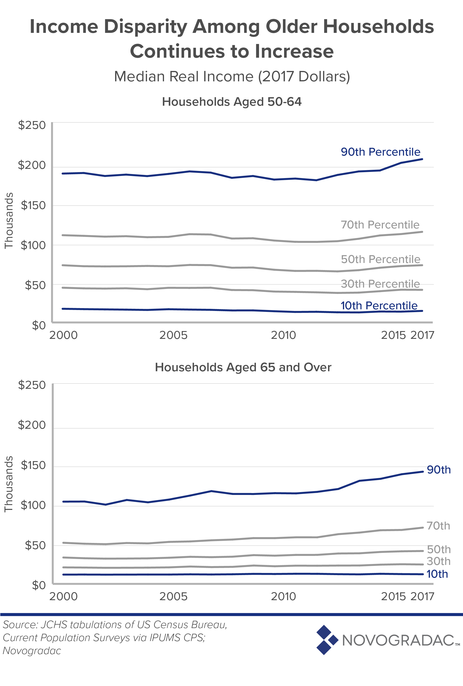 Alarmingly, the number of older households with very low incomes is expected to climb sharply as the U.S. population as a whole ages–the population of very low-income older households is predicted to grow from 5.3 million in 2018 to 7.9 million in 2038. Beyond security, home ownership greatly contributes to wealth. Older renters have less wealth than older homeowners, even if income is around the same. See the chart below that emphasizes how important home ownership is when it comes to accumulating wealth. 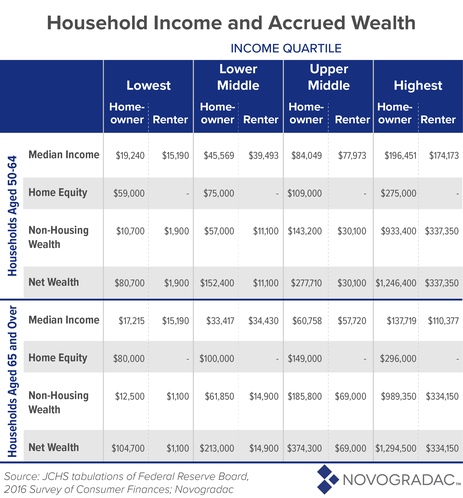 As the older population continues to grow, the pressure on policymakers to address the housing needs of older households will also quickly increase. The JCHS report discusses how these needs should be met with federal subsidies. While the number of older adults that qualify for federal subsidies has increased, the share of eligible older adult’s actually receiving federal assistance has decreased 2 percentage points from 35.6 to 33.5 percent in the past five years. Only a third of those eligible for assistance are receiving assistance. Out of the group that qualify but do not receive assistance, 1.9 million are severely cost burdened and/or live in severely inadequate housing. According to JCHS population growth predictions, 2.4 million of older adults eligible for federal rental assistance will be added to the group of very low-income older adults without affordable housing by 2038. The report cites the necessity of an increase in affordable housing in meeting these needs, and emphasizes the urgency for affordable housing reform. Increased construction and preservation of low-income housing tax credit (LIHTC) properties should be part of that reform. The LIHTC is a powerful tool that can increase the supply of affordable housing, which will help to meet the increased demand that will be seen from the growing older adult population. Enacting provisions of the Affordable Housing Credit Improvement Act –namely the proposed minimum 4 percent credit rate, which would make financing developments that require the preservation of affordable housing more predictable and feasible, and the 50 percent basis boost for developments serving extremely low-income households, which as illustrated above includes a large number of older adult renter households, particularly those dependent on Social Security–would be a step in the right direction. The low-income elderly population is a particularly vulnerable group when it comes to housing security. This JCHS report serves as a reminder that the affordable housing crisis is widespread and does not discriminate by age.

Help Rewriting QAPs Provides Opportunity for Clarity, Simplification
Rising Stars: Novogradac Spotlights Younger Leaders in Community Development
ESG Investing: Where it is Now; Where it’s Headed; What to Do
END_OF_DOCUMENT_TOKEN_TO_BE_REPLACED