As the opportunity zones (OZ) incentive enters its fifth year, one of the main priorities among legislators and stakeholders is the need to disseminate and collect more data. Having more data made available is key to truly assess the incentive and what has been accomplished thus far.

At the request of Congress, the Government Accountability Office (GAO) recently made public its second report on the OZ incentive, Opportunity Zones: Census Tract Designations, Investment Activities, and IRS Challenges Ensuring Taxpayer Compliance, in which they analyzed a range of data from the Internal Revenue Service (IRS), Department of the Treasury (Treasury), Census Bureau, surveys of qualified opportunity funds (QOFs) managers and state government officials. This report represents the most complete examination of the OZ incentive to date, but more data is still needed.

The Novogradac OZ Working Group, which works to identify and address OZ regulatory, technical and administrative policies, has made addressing the need for increased and appropriate data collection chief among its priorities for 2022 and as such applauds the GAO’s report and similar efforts that expand the knowledge base around OZs. The working group was fortunate to be joined by representatives from the GAO–Brian James, Mark Kehoe, Dan Mahoney and Dawn Bidne–at its December meeting to discuss the report’s findings with working group members and take questions.

The GAO report includes data from filed 2019 tax returns for approximately 6,000 QOFs that had invested more than $29 billion into projects located in OZs. In compiling its report, the GAO also used data from the 2011-2015 and 2012-2016 American Community Survey, guidance from the IRS and Treasury, IRS documents and regulations, surveys from 18 randomly selected QOF representatives, and surveys from government officials from all 50 states, the five U.S. territories and Washington, D.C.

The main takeaway from the GAO’s report is the lack of available data on the OZ incentive, with many survey respondents unable to respond to questions or form an opinion on the OZ incentive as they lacked the necessary data because it doesn’t exist, hasn’t been made available or, not enough time has passed to provide an assessment.

It is promising that 53% of state officials interviewed by the GAO found the incentive had either a net positive or net neutral effect on their state, but nearly one-third of respondents were unsure of the effects of the OZ tax incentive. Respondents attributed this uncertainty to their not having enough information to understand the tax incentive’s impact or they said that it was too early for them to form an opinion. 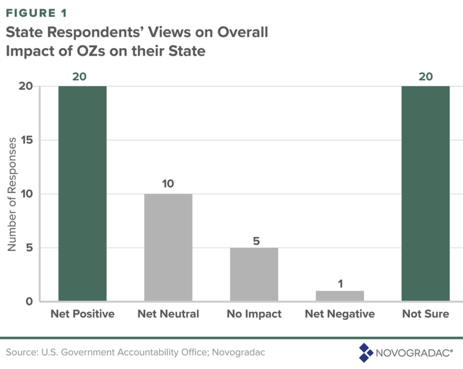 The need for time and data extended to the discussion on COVID-19. The GAO noted that while a number of respondents have reported that the COVID-19 pandemic has affected the OZ tax incentive in their states, there is not yet enough data to understand the full extent of the pandemic on OZs. Treasury and the IRS have provided pandemic-related relief to investors, QOFs and qualified OZ businesses in the form of several deadline extensions, but it is still too early to fully understand the impact of the relief. 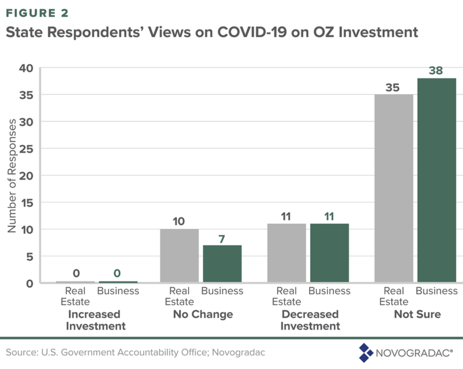 GAO reports $29 billion in investments into the observed OZs. It should be noted that due to IRS extensions of deadlines for filing tax returns and processing delays due to COVID-19, incomplete data for both paper-filed and amended returns, and certain IRS forms not being digitized—all reasons listed in the GAO report—it could be some time before the full extent of investment is known.

GAO’s report, its second to Congress, does provide much needed data about the OZ incentive, including the number and volume of investments, the projects the incentive funds and the varied opinions on the incentive. Still, there is a concern the full picture of the early years of the incentive will never be fully known. The GAO team noted that the Treasury Department is still backlogged in its efforts to transcribe data provided in paper-filed Forms 8996 for 2019, but this is a slow process and any early release of this data could result in taxpayer privacy issues.

To improve the OZ incentive, the GAO made two recommendations to the IRS: that it focus on improving data collection and reducing compliance risks. In its report, GAO noted that the IRS cannot fully mitigate the compliance risks that the IRS itself has identified because the data necessary to do so may never be available, particularly for the first few years of the incentive.  The IRS’ mitigations for potential compliance issues hinge on its ability to match data from tax Forms 8949, 8997, 1099-B, and 8996. However, many taxpayers paper-filed these forms and the IRS has not yet finished transcribing this data into a format that allows for electronic matching. Additionally, the GAO noted that some of the necessary data from these forms is not scheduled to be transcribed until beginning with tax year 2021. 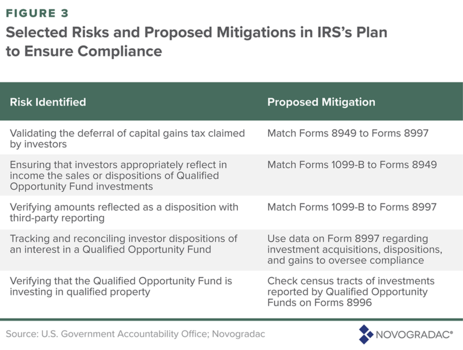 GAO’s recent analysis builds on research that has come before it, including a GAO report from October 2020 on the need for improved oversight to better allow for assessment of the incentive.  When asked about whether the delivery of this latest report completes GAO’s responsibilities, the GAO team responded that based on the Congressional request that tasked GAO with assessing the OZ incentive, which was very broad, there could be additional reports as more data becomes available, but nothing is planned at this point.

This is not to say the data provided in the GAO report is not valuable. Compared to the April release, Neighborhood-Level Investment from the U.S. Opportunity Zone Program: Early Evidence, by Patrick Kennedy and Harrison Wheeler, the GAO report is based on both a larger  number of QOFs and a significantly higher amount of aggregate investment. For instance, the Kennedy/Wheeler report provided data from 2,756 QOFs with a total of $18.9 billion in investment, while GAO reported on 6,845 QOFs and $29 billion in investment. Furthermore, based on their data, Kennedy/Wheeler reported 16% of OZs observed received investment, compared to 25% of the census tracts studied by GAO having received investment. The Kennedy/Wheeler figure is often cited by opponents of the OZ incentive, but with the larger GAO sample size, the percentage of OZs receiving investment increased; as additional 2019 tax return data is released, this percentage will likely continue to increase.

GAO and OZs stakeholders are not alone in calling for more data. The need for more easily accessible data was also a main theme of a recent House Ways and Means Oversight Subcommittee’s OZ hearing that was held Nov. 16. The purpose of the hearing was to discuss the impacts of the OZ incentive and ways it can be improved. While witnesses had varying opinions about the success and impacts of OZs, none expressed a desire to have Congress eliminate the incentive, nor did any of the Congressional members participating in the hearing.  All involved wanted to see changes made that would ultimately strengthen the incentive. Most of the recommended improvements were in regards to the program needing more robust data collection to make assessment of the incentive possible. On Dec. 20, Ways and Means Democrats submitted a letter to Treasury regarding OZs regulations. Citing research and comments provided during the aforementioned hearing, one of the letter’s requests was for Treasury to require transaction reporting, separate from tax forms. During its presentation to the Working Group, GAO reiterated its recommendations from October 2020 that Congress specify the group to be responsible for the data collection and the actual data to be collected. GAO noted that data collected outside of tax forms would eliminate the issue of taxpayer privacy and allow for more robust, aggregate reporting to be made available to the public.

Novogradac and its OZ Working Group have been working since before the OZ incentive was enacted to identify and address technical and administrative issues that could impede the incentive from reaching its full potential. The opportunity to hear the GAO speak to the OZ Working Group is just one of the many benefits that membership in the OZ Working Group provides to its members. Other benefits include the ability to discuss technical issues with other group members and to contribute to the many comment letters submitted by the group–this year alone the group submitted eight comment letters on a range of topics including requests for additional COVID-19 relief, modification of Community Reinvestment Act regulations, conducting outreach to the Biden administration and Congress, and responding to requests for input from the IRS.

There is widespread agreement across the industry and on a bipartisan basis in Congress on the need for transparency and reporting on the targeted impact of investments in OZs. In the first quarter of 2022, it is likely that Congress could consider OZ reporting requirements and other legislative changes in tax extenders legislation, which could be attached to fiscal year 2022 appropriations legislation in February 2022. The OZ Working Group intends to participate in this conversation by providing concrete recommendations on reporting requirements, suggesting reasonable measures that protect sensitive taxpayer information and preserve the efficiency and flexibility of the incentive without overburdening entrepreneurs and government.