The National Low Income Housing Coalition’s (NLIHC’s) annual Out of Reach report found Americans working a full-time job at the applicable federal, state, or local minimum wage in the United States cannot afford the estimated rent for two-bedroom modest housing at fair market value (FMR) in any state, metropolitan area, or county in 2022.

Released July 28, the report details the increasing gap between renters’ wages and the cost of rental housing. The main takeaway from the report is that a minimum wage worker would have to work 96 hours per week to afford a modest two-bedroom rental, or 79 hours per week to afford a modest one-bedroom rental home. Chairwoman Maxine Waters, in her forward to the report, stressed the importance of housing, stating, “housing is at the heart of a more just and prosperous nation,” which is why the Out of Reach report is so important, as it “sheds light on the reality that so many families in this country face.”

The U.S. Department of Housing Urban Development (HUD) defines FMR as the 40th percentile of gross rents for standard rental units of recent movers. FMRs are determined by HUD on an annual basis and reflect the cost of shelter and utilities. FMRs are used to determine payment standards for the Housing Choice Voucher program and Section 8 contracts. The NLIHC also defines full-time work as 2,080 hours per year (40 hours each week for 52 weeks). 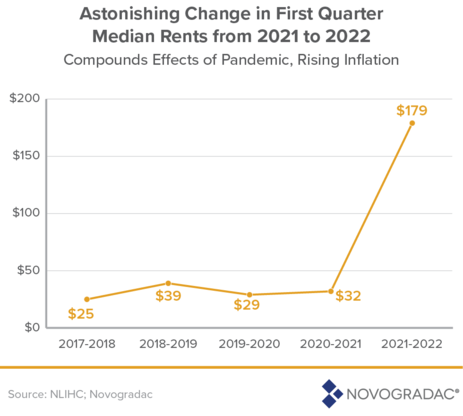 It may not be surprising that rents are unaffordable in New York, but even in areas like West Virginia, Arkansas and Puerto Rico, which are seemingly more affordable based on NLIHC’s findings, the median income are lower and they have minimum wages of $8.75, $11.00, $8.50, respectively, which puts a modest, two-bedroom rental home out of reach. 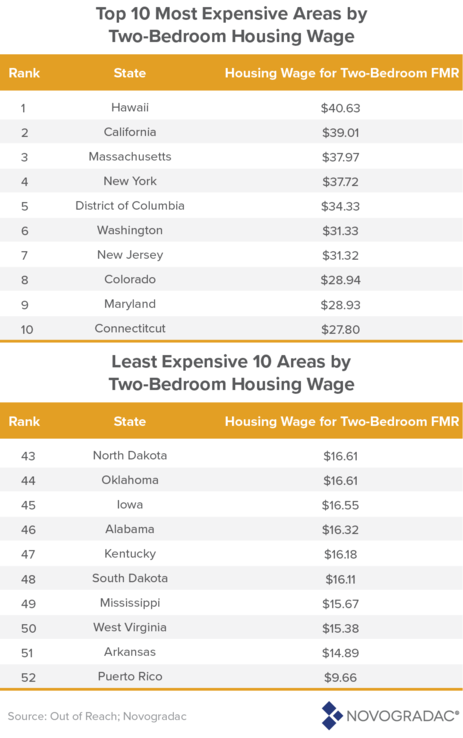 Factors contributing to the increased rent according to the NLIHC include housing shortage, purchases by investors increased, and rising inflation. Recent NLIHC research presented in their report, The Gap: A Shortage of Affordable Homes, found a 7 million affordable housing shortfall for extremely low-income renters, a shortage that contributes to the increased cost of rent. According to the NLIHC, another factor contributing to rising rent is rising inflation.

The economic effects of the ongoing COVID-19 pandemic, inflation rates not seen since the 1980s and a continued shortfall in the supply of affordable housing all place very low- and extremely low-income renters in a precarious position. Rent costs at or above $694 are out of reach for American families with incomes at the poverty-line. For people with disabilities who receive and rely solely on, federal Supplemental Security Income (SSI), NLIHC calculates that they can afford $252 a month in rent. The plight of seniors is not always the focus of housing reports, but NLIHC notes that 4.4 million senior renters with incomes less than 50% of the area median income (AMI) are housing cost-burdened, spending more than 30% of their income on rent. The NLIHC report also shed light on the continuous systemic housing issues as it relates to Black, Indigenous and people of color (BIPOC) households. The average African American and Latino full-time worker earns, on average, $12,022 and $12,646 less, respectively, than the average white worker. According to the U.S. Census Bureau, Native American households earns $46,000 annually compared to $69,000 for white households.

With the national average rent for a one-bedroom at $1,105 per month and $1,342 for a two-bedroom home, coupled with inflation, the affordability gap continues to widen. NLIHC reports that nationwide, only 9% of all United States counties, excluding Puerto Rico, have one-bedroom rental homes that are affordable for full-time minimum-wage workers. 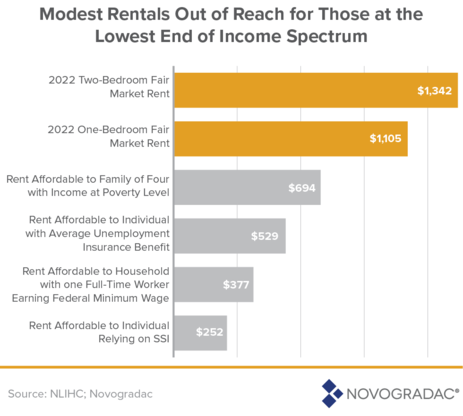 In the United States, 11 of the largest 25 occupations pay a wage lower than the one-bedroom housing wage of $21.25, resulting in full-time workers’ inability to afford a modest one- or two-bedroom apartment at fair market value, according to NLIHC. NLIHC takes 2021 occupational wage data from May 2021 Occupational Employment Statistics as reported by the Bureau of Labor Statistics and adjusts it to 2022 dollars; housing wages were based on HUD’s FMR. The occupations represented below account for 35% of the United States workforce (farmworker are not included). 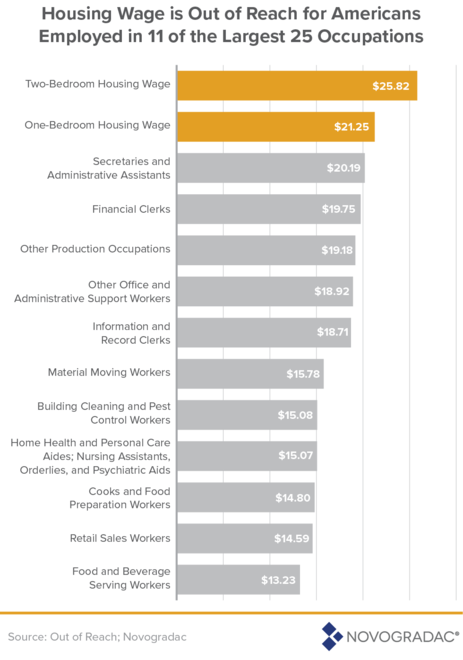 Addressing the gap between what workers earn and the FMRs in their communities means developing a multi-pronged plan of action. NLIHC provided four suggestions on how to go about tackling the housing crisis:

Universal rental assistance must be paired with a commitment to constructing and preserving more affordable homes, funding an emergency housing stabilization fund to aid renters in crisis, and strengthening renter protections.

The full breadth of the nation’s housing issues cannot be addressed without understanding the underlying causes. The NLIHC report put a spotlight on the unique experiences of low-wage renters and renters on a fixed income, many of whom worked two or three jobs yet still could not afford rent and other necessities, such as health care, childcare and car insurance. In addition to the gap between wages and rents, NLIHC’s report also highlighted the housing practices that it argues contribute to systematic racism that persist into 2022. BIPOC workers, who are more likely to work jobs that provide a lower wage than their white counterparts according to the report, face a harder time finding housing that they can afford. Moreover, BIPOC workers, who research shows can be paid less for doing the same job as white workers, face added difficulties. Record increases in rents over the past few months have only exacerbated the already existing affordability crisis, leading renters to mobilize to address the rising rent and voicing their need for safe, equitable, and livable housing as demonstrated in the Out of Reach testimonies.

Recent Congressional hearings on the need for more affordable housing in the United States coincide with the release of the Out of Reach report regarding. During Senate hearings that took place in mid-July, a bipartisan show of support for the low-income housing tax credit was demonstrated. The fact that the Senate and House, whose Ways and Means Committee hosted a housing hearing in July, are taking the initiative to discuss housing should provide housing advocates with hope that Congress will turn its attention to addressing the nation’s longstanding housing issues.