The Capital Magnet Fund (CMF) is among the programs singled out in the president’s 2018 rescission package. The 38 proposed rescissions of budget authority equals over $15 billion in cuts targeting a wide range of agencies and programs. The proposal would rescind the estimated $142 million that the CMF is slated to receive for its 2018 round from 2017 Fannie Mae and Freddie Mac contributions. As part of the rescission process, the Government Accounting Office (GAO) conducts a review of the proposal, which was recently made public.

The CMF was created through the Housing and Economic Recovery Act (HERA) of 2008 along with the Housing Trust Fund (HTF). The housing government sponsored entities (GSEs) Fannie Mae and Freddie Mac are required by HERA to contribute quarterly to the CMF and the HTF, but those contributions were suspended while the GSEs were conservatorship from 2008 until 2015. While the GSEs were in conservatorship, Congress appropriated funds for the CMF in 2010 to jumpstart the implementation as opposed to allocations being made from the GSEs. The HTF is distributed by the U.S. Department of Housing and Urban Development (HUD). Funds for the CMF are transferred to the Treasury Department, whose Community Development Financial Institutions (CDFI) Fund awards CMF funding through a national competition.

Based on the GSEs’ most recent SEC filings, Novogradac estimates that the CMF will receive about $142 million. This FY 2018 CMF allocation estimate is 18 percent higher than the 2017 actual allocation because Treasury did not divert 25 percent of the CMF contributions to the HOPE Reserve Fund, as was required for the previous two rounds. 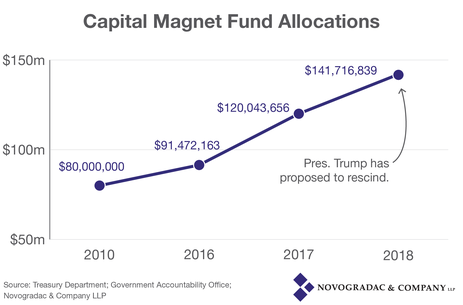 To date, the CDFI Fund has awarded more than $291 million through three funding rounds to 75 awardees (17 recipients received more than one award) in 31 states. This translates to more than $2.9 billion in private-public investment as awardees are required to leverage their awards by a minimum ratio of 10 to 1. Top award recipients will use their awards to leverage at least $1.1 billion dollars in investment.

Over the three funding rounds, total CMF awards—and therefore the program’s reach—has increased. With an average award size of $3.5 million, 23 awardees in 14 states received funds in the 2010 round. The number of awardees grew to 32 in the 2016 round, with recipients receiving an average award of $2.9 million. In 2016, agencies were located in 21 different states, with the majority of recipients (31 percent) having a local service area coverage. The service area of recipients shifted in 2017 with 40 percent of recipients reporting a multi-state focus. Overall, the 40 awardees represented 24 states. The average award size was $3.1 million in 2017 and five housing finance agencies (HFAs) were counted among grant recipients, compared to just one HFA in 2016 and none in 2010.

Awardees for the 2017 round plan to fund more than 21,000 units of affordable housing, both rental and homeownership, 91 percent of which will be developed for low-income families. This would bring the total housing units created through the three funding rounds to date to more than 50,000 units. In addition to housing, awardees plan to undertake economic development activities; the CMF award book reports these activities will take the form of community service facilities like workforce development and daycare centers, and healthcare clinics. The CDFI Fund reports the 2010 and 2016 rounds have supported the creation of more than 33,000 jobs and another 16,000 jobs are expected to be created as a result of the FY 2017 round.

Advocates have called on Congress to reject the cuts outlined in the rescission package. The CDFI Coalition highlighted the CMF’s positive impact on low-income communities in its letter to Congress. The Opportunity Finance Network is urging stakeholders to take action and sent an opposition letter to the chairs and ranking members of the appropriations committees and financial services and general government subcommittees. The National Housing Conference and its partners have also sent a letter to Congress opposing cuts to the CMF. Advocates gained additional time to lobby to save programs when the vote on the plan was delayed because of some Republican House members’ concerns about the proposed rescission package. Still, with the appointment of a new Federal Housing Finance Agency director on the horizon, stakeholders and advocates need to remain vigilant in their support of these programs.