The Nov. 3 revised draft  was reduced from the original version as reported by the House Budget Committee Sept. 25, which included the portions of the bill House Ways and Means and Financial Services Committee providing historic investments in affordable housing and green energy.

See also the accompanying section-by-section summary and Joint Committee on Taxation cost estimates of this latest version of the bill. After passing the rules for floor consideration Nov. 5, the House is scheduled to consider this reconciliation legislation the week of Nov. 15.

Below are highlights of the housing, community development and green tax incentives. 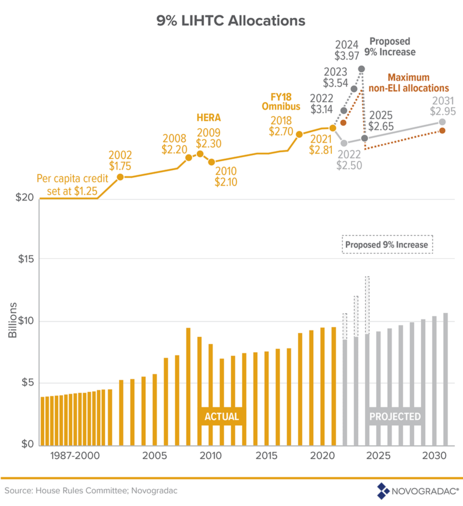 The Senate may make changes to this proposal to extend the 9% allocation increases through 2025 to line it up the expiration of many other temporary tax policies (including the NHTC detailed below), and possibly to make the 12.5% allocation increase originally enacted in 2018 permanent and a part of the baseline.

Novogradac is in the process of updating its unit-financing, job and economic impact estimates of these LIHTC proposals on affordable rental housing production and preservation, and will detail them in a subsequent Notes from Novogradac blog post.

The reconciliation bill would create a NHTC very similar to the tax credit proposed in the Neighborhood Homes Investment Act (H.R. 2413, S.98), and the DASH Act, but allocations are reduced and the NHTC would expire after 2025. The proposed NHTC is estimated to finance the construction or rehabilitation of about 125,000 owner-occupied homes in distressed neighborhoods. Please see this post for an overview of the NHTC as originally envisioned. 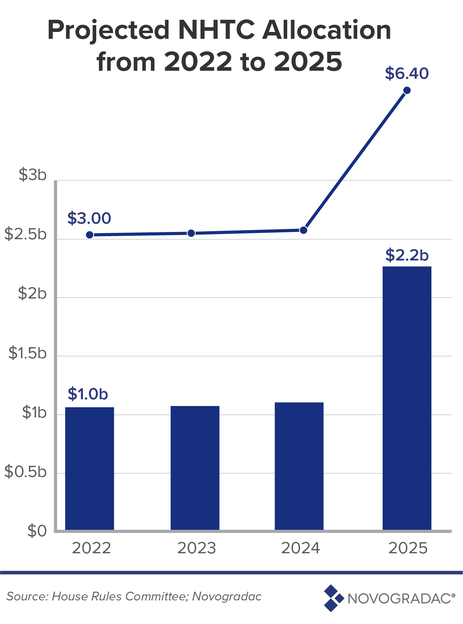 Would create a $175 million separate pool of NMTC authority in calendar years 2022-25 for low-income community investments in tribal statistical areas, for tribal areas and for projects that serve or employ tribe members (section 135302 in reconciliation bill).

The proposals originating in the New Markets Tax Credit Extension Act (H.R. 1321, S. 456) to make the NMTC permanent, adjust annual allocation authority by inflation, or provide alternative minimum tax (AMT) relief were not included. Nor was the $3 billion in temporary stimulus allocation authority for 2022-23 or the $100 million separate pool NMTC authority for low-income community investments in the U.S. territories were included in the Nov. 3 BBB draft. The Senate may add some of these NMTC proposals if the legislation passes the House.

None of the proposals originally included in the Historic Tax Credit Growth and Opportunity Act (HTC-GO, H.R. 2294/S. 2266) or the Rehabilitation of Historic Schools Act (H.R. 4086) were not included in the Nov. 3 BBB draft. The Senate may add some of these HTC proposals if the legislation passes the House.

The overall framework of the set of renewable, clean energy, and energy efficiency tax incentive proposals as included in the Sept. version was largely retained, although the Nov. 3 BBB draft made various changes throughout and the overall cost of the proposals increased by nearly $52 billion over 2022-31. The increase was largely the result of removing the proposed $150 billion in spending for the Clean Energy Payment Program (CEPP) from the Sept. version of the Energy and Committee portion of the BBB reconciliation bill, which prompted congressional leadership to replace a portion of the lost resources devoted to CEPP to enhancing various green energy tax incentive proposals in the Nov. 3 BBB draft.

The two main green tax bills that served as inspiration for this subtitle—the House’s Growing Renewable Energy and Efficiency Now Act (GREEN Act, H.R. 848) and the Senate’s Clean Energy for American Act (CEAA, S. 1298)—are now reflected in the Nov. 3 BBB draft. In essence, the GREEN Act architecture of the green energy tax proposals where existing technology incentives are largely extended and enhanced to guide the first five years and serve as a transition to the framework envisioned in CEAA, which would provide technology neutral production, investment, and energy efficiency tax incentives.

The specifics of the green energy tax subtitle, including changes from the Sept. version of the BBB bill will be examined in a future post.

The Nov. 3 BBB bill retains the various housing and community development spending proposals included in the House Financial Services Committee portion of the bill, but reduces the amount available from the $327 billion proposed in Sept. to more than $156 billion.  See summary below.

As noted above, the House is scheduled to consider the legislation the week of Nov. 15 after the rules for considering the bill on the House floor were approved Nov. 5. The House is not in session the week of Nov. 8, as it often does not schedule votes during the week of Veteran’s Day (Nov. 11). The passage of House floor rules for the legislation was made possible by an agreement between House moderate Democrats, especially those in the Problem Solvers and Blue Dog caucuses, and House progressive Democrats. That agreement also allowed the Infrastructure Investment and Jobs Act, the bipartisan infrastructure legislation to be voted upon Nov. 5 and subsequently pass the House.

One key component of the agreement was the importance of the forthcoming score of the legislation by the Congressional Budget Office, which may or may not confirm the cost estimates provided by the White House. However, even the cost estimates differ, House moderate Democrats pledged to work with leadership to resolve these differences and consider the legislation. Such a resolution may postpone House consideration of the bill until the week of Thanksgiving.

If the bill passes the House before Thanksgiving, the Senate is expected to take up the legislation directly on the floor the week of Nov. 29.  Before it can be voted upon, the Senate Parliamentarian must review the entire bill for compliance with the Byrd Rule governing budget reconciliation bills in the Senate.  Such a review may lead to proposals being dropped and other changes being made. If so, the House would need to consider the bill again if the Senate passes such a revised bill. It may take until Christmas or New Year’s before final legislation could be enacted. Stay tuned.