The U.S. Department of the Treasury’s Community Development Financial Institutions (CDFI) Fund announced its largest Capital Magnet Fund (CMF) award amount to date June 22: $336.4 million for the FY This far surpasses the previous record of $175 million in the 2020 round.

The Notice of Funding Availability for the round published in September 2021 indicated that up to $380.2 million would be available. It is unclear why the CDFI Fund did not award the remaining $43.8 million in funding availability, the first time a significant amount of funding availability was not awarded in a particular round.

Importance of the CMF

CMF awards provide important entity-level (rather than property-level) financing for affordable housing developers, CDFIs and housing finance agencies (HFAs) to finance affordable housing. They are particularly important during a time of rising costs due to inflation and the lingering effects of the COVID-19 pandemic. The CDFI Fund provides CMF award recipients with opportunities to use CMF awards to develop, rehabilitate, preserve and acquire affordable housing. CMF awards can also be used to improve the communities in which the development may be built by creating community service facilities.

With this most recent round of awards, nearly $1.08 billion (which must be leveraged by other private and public sources to provide a minimum of $10.8 billion in financing, but given recent leveraging history, will likely much more) has been awarded since the CMF’s inception to recipients.

For the FY 2021 round, 59 awards were made according to the fiscal year 2021 Capital Magnet Fund Award Book. This tops the previous high of 48 awardees in FY 2020. There have been corresponding increases in applications with nonprofits and CDFIs submitting 146 applications and requesting more than $991.8 million in FY 2021. Those figures are up from 137 applications and $642.2 million in requests in FY 2020. FY 2021 awardees included 32 CDFIs and 27 nonprofit housing organizations, five of which were state HFAs, according to the award book. The CDFI awardees were comprised of 29 loan funds, two banks or thrifts, and one depository institution holding company. Collectively, 47 states, the District of Columbia and Puerto Rico will be served by award recipients. Of FY 2021 round recipients, 75%, were repeat awardees, with 15 new recipients. For the first time, individual awards surpassed $8 million, with five awardees receiving $12 million awards each.

Awardees are required to leverage their FY 2021 CMF awards with other private and public investments by a ratio of at least 10 to 1, meaning a minimum of $3.36 billion will be invested in eligible developments across the United States and its territories. Awardees often surpass this amount. The FY 2021 round will leverage $12.4 billion in public and private investments, 79% of which will be private investments, according to the award book.

In 2021, affordable homes became even more scarce than before the pandemic due to increased housing costs and continued supply and demand inequities. The awardees’ housing plans could help alleviate this burden. Their plans include developing 41,100 affordable homes, which includes more than 38,700 affordable rental homes and more than 2,400 affordable owner-occupied homes. Nearly all the homes developed (97%) will target low-income families with incomes at or below 80% of the area median income (AMI), per the award book. Very low-income families, those with incomes at or below 50% AMI, will be allotted 61% of the developed rental homes. The homeownership units developed will be targeted to low-income households. Rural areas are also in need of investment and awardees plan to use 51% of their awards in those areas. Community service facilities (e.g., workforce development and health care facilities) are vital to areas that serve those who need affordable housing. The awardees plan to invest 10% of their awards to undertake economic development activities in conjunction with planned affordable housing, according to the award book. 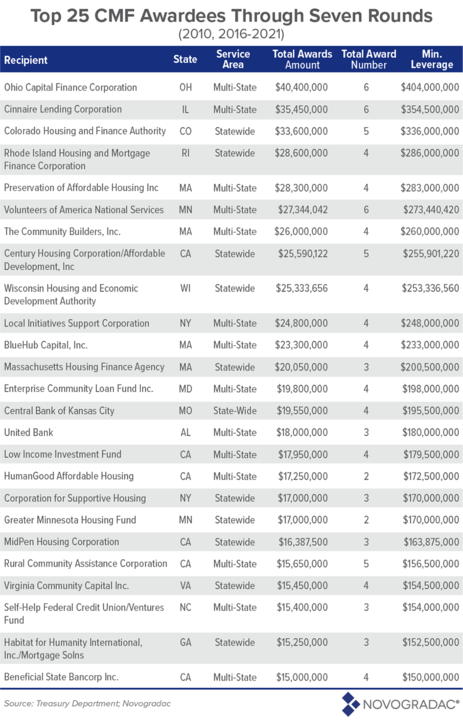 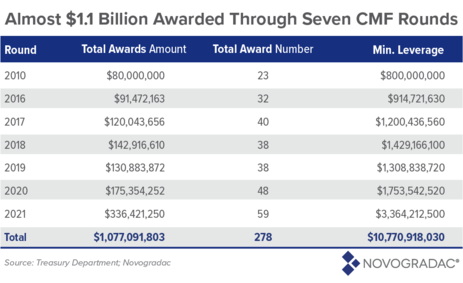 Through the six previous CMF rounds (FYs 2010, 2016-2020), the CDFI Fund has awarded grants totaling more than $740 million to CDFIs and qualified nonprofit organizations. Program requirements would mean at least $7.4 billion in public and private investment would have to be leveraged by awardees. As reported by the CDFI Fund, of completed developments, awardees have reported nearly $9.4 billion in total leverage. With recipients having five years to complete developments after receiving an award, the CDFI Fund reports that FY 2016-FY 2020 award recipients have disbursed funds to complete a range of   rental, homeownership and economic development activities. As of Sept. 30, 2021 the following disbursements have been made according to the CDFI Fund:

It is possible the record setting seventh round awards could be topped by the FY 2022 awards. CMF funding is based on the Securities and Exchange Commission (SEC) filings of the housing government sponsored entities (GSEs) Fannie Mae and Freddie Mac. Each year Novogradac uses this filing data to estimate the funding available for the upcoming award round. In February, Novogradac estimated the Federal Housing Finance Agency would transfer $396 million to the CDFI Fund for the CMF.

SEC filings reflect the volume of the annual new business purchases from Fannie Mae and Freddie Mac, which has been propelled especially by refinance loans and remained robust through 2021. Rising inflation and interest rates will likely have a chilling effect on the housing market and especially for the demand for refinancing loans, likely leading to lower CMF awards for the FY 2023 round, expected to open in late 2023 and awarded in 2024.

It is never too early to start preparing for the FY 2022 round, which is expected to open in fall 2022. For those considering participating in the FY 2022 CMF round, Novogradac has professionals ready to assist  in structuring a CMF application.