The main changes from the Nov. 19 House-passed version of BBB are:

The rest of legislation’s affordable housing proposals, summarized in this Nov. 9 post, remain unchanged. However, Novogradac updated unit financing estimates for all of the proposals to reflect the latest inflation projections, as recent changes in inflation projections have had a material effect on these estimates.

What does Manchin’s Dec. 19 announcement mean for the BBBA?

On Dec. 19, Sen. Manchin, D-West Virginia, announced he would vote no on the Senate BBB version as currently drafted, citing concerns about the overall cost of the legislation, its structure of temporary provisions and his opposition to specific proposals, such as paid family leave, among others. Given the universal opposition of Senate Republicans and 50-50 margins in the Senate, the lack of support from Manchin means the Senate BBB version is stalled and will not advance unless significantly changed. It is unclear if Manchin opposes any of the affordable housing proposals, but such proposals may be at risk as Manchin negotiates the scope of the legislation and prioritizes other BBB proposals over affordable housing.

More than 1.9 Million People Could be Affordably Housed as a Result of the Primary LIHTC Unit Financing Provisions of the BBB Reconciliation Bill

Using calculations that include assumptions based on research conducted by the National Association of Home Builders, Novogradac estimates the 819,900 homes financed by the primary LIHTC unit financing provisions could house more than 1.9 million low-income people. Over a decade, the financing of these homes would also generate :

That tax revenue generated is $35 billion more than the estimated $12.7 billion in federal cost, according to the Joint Committee on Taxation. Through the financing of these additional affordable homes, the BBBA would go a long way in assisting the millions of low-income households who are cost burdened, cannot find affordable housing, or are experiencing homelessness.

The estimates presented in this post are part of Novogradac’s ongoing analysis of rental housing provisions included in proposed legislation to enhance and expand the LIHTC and private activity bond (PAB) rental home financing. For each estimate detailed below, several steps were taken to arrive at the additional affordable rental homes projected to be financed. In the case of each set of estimates, certain provisions provide the foundation upon which additional analysis is based. For 9% estimates, the analysis assumes the 2021 amounts, as adjusted by the temporary 12.5% allocation increase enacted in 2018 and expiring at the end of 2021 is the baseline for 2022-2025 9% allocations. Additionally, all of the estimates assume that gap financing is scalable with the increased availability of LIHTC equity and PAB debt, which seems a reasonable proposition, given the more than $156 billion in U.S. Department of Housing and Urban Development, U.S. Treasury’s Community Development Financial Institutions Fund and U.S. Department of Agriculture rural housing supplemental funding available in the housing and community development spending portion of the BBB bill. The scalability of gap financing applies more so to 4% LIHTC properties than to the 9% LIHTC properties in the analysis that follows, because the 4% LIHTC is a shallower subsidy than the 9% LIHTC.

Like the House-passed BBB, the Senate draft would temporarily reduce the tax-exempt PAB financed-by threshold from 50% to 25% for buildings financed by obligations issued in calendar years (CY) 2022-2026, but not obligations issued prior to CY 2022 or after CY 2026. Novogradac estimates lowering the threshold from 50% to 25% could generate an additional 735,500 affordable rental homes financed by 2022-2026 multifamily PAB issuances. This estimate is updated with data from the recent 2020 Council of Development Finance Agencies 2019-2020 National Private Activity Bond Volume Report.

Previous Novogradac analysis commissioned by the National Council of State Housing Agencies (NCSHA), in both a 2020 report and a 2021 update, analyzed the effects of lowering the threshold test. To estimate the number of rental homes that could be financed, Novogradac developed a pro forma model that establishes national baseline percentages for the sources and uses of financing for PAB financed LIHTC developments. This model is based on NCSHA Annual Factbook data available for 2016, 2017, 2018 and 2019 (the four most recent years available at the time of writing the 2021 update). The model is also informed by the review of final cost certification data from a national sample of PAB-financed developments. The pro forma model has distinct estimates for new construction, substantial rehabilitation and acquisition/rehabilitation developments.

The Senate bill would extend the 12.5% increase in 9% LIHTC allocations originally enacted in 2018 and scheduled to expire at the end of this year as part of the baseline through 2025 with annual inflation adjustments, and add a roughly 25% increase in 2025. Specifically, the reconciliation bill would increase the annual 9% LIHTC allocation from $2.81 per-capita with $3,245,625 small state minimum in 2021 under current law, to:

As a result of these policies, Novogradac estimates about 12,400 fewer affordable rental homes will be financed during 2022-2031 than under current law. 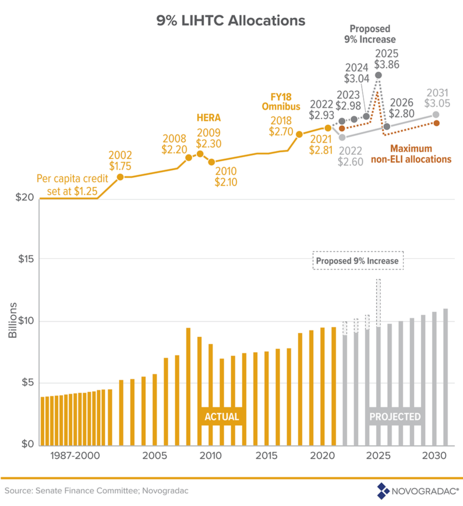 Actual and Projected Total (9% and 4%) allocations 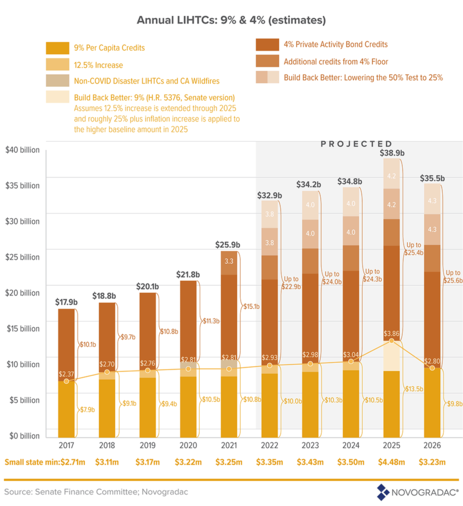 The reconciliation bill would provide a permanent maximum 50% basis boost for units serving ELI tenants if needed for financial feasibility that Novogradac estimates could finance an additional 59,400 affordable rental homes in 4% and 9% LIHTC properties over 2022-2031. This estimate includes ELI units in 9% properties not accounted for under the 9% allocation increase estimate above. The reconciliation bill states that not more than 92% of 9% LIHTC allocations can be for buildings that reserve less than 20% of their units underwritten for ELI households. ELI households are those earning at or below the greater of 30% of the area median income or the federal poverty line. To qualify for the proposed 50% basis boost, at least 20% of the units in the property would have to be underwritten and set aside for ELI households and the increased boost is available only for those units set aside for ELI households. The reconciliation bill further limits the availability of the 50% ELI basis boost to no more than 13% of 9% LIHTC allocations or properties financed by no more than 8% of each state’s PAB volume cap.

Given the deep subsidies required to make rental homes affordable to ELI households, additional tools—such as the targeted maximum 50% basis boost proposed—are needed to make properties financially feasible. The purpose of the 50% ELI basis boost is to reduce hard debt as much as possible to offset for the reduction in income generated by the lower rents charged to the ELI rental homes.

Novogradac estimated the number of rental homes that could be financed with the increased equity and lower debt service. In the case of 4% LIHTC properties, the ELI basis boost would likely be used in properties financed under the Rental Assistance Demonstration program, with its focus on preserving public housing properties by leveraging private investment, or other federally assisted properties serving ELI households.

Like the House bill, the Senate bill would designate Native American areas as difficult development areas, as proposed by the reconciliation bill, would help to alleviate one of the difficulties specifically related to development in these areas. Because land belonging to reservations cannot be used to collateralize a loan, and also cannot be sold, it is difficult to obtain conventional debt for properties in Native areas. The additional LIHTCs that would result from this particular basis boost would help to address affordable housing needs on tribal lands by reducing the amount of debt a development would need to take on, thus also reducing the risk to the lender. Native American LIHTC properties also tend to have lower LIHTC equity pricing, thereby reducing the amount of equity available. As with the similar proposals in AHCIA, the basis boost provisions included in the reconciliation bill would expand upon existing boosts already allowed under current law. Basis boosts increase a property’s maximum LIHTC allocation, thus allowing that property to generate more LIHTC equity. This increase in equity makes new construction or rehabilitation of an existing property more financially feasible. The additional LIHTCs would help address that issue as well. Novogradac estimates an additional 2,100 affordable homes over 2022-2031 from this proposal. This provision is effective for properties placed in service after Dec. 31, 2021. 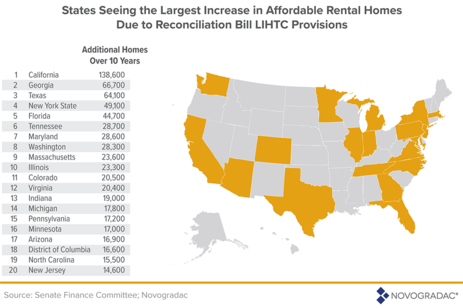 Manchin’s opposition has seriously clouded the prospects for the BBB agenda, especially in the near term. The Senate is scheduled to return Monday, Jan. 3, 2022, and Senate leadership had originally planned to advance BBB in January 2022 so that the House would have sufficient time to act on the revised legislation in time to allow the IRS to have sufficient time to allow for monthly advance Child Tax Credit payments to resume in February 2022. Given the scale of Manchin’s objections, however, it appears unlikely Congress will be able to pass a revised version of BBB in January 2022, and deliberations are likely to continue through February 2022 at least, if not longer.

The next key federal deadline in 2022 is Feb. 18, when the continuing resolution funding the federal government expires. Congress initially set that deadline in early December to give time for Congress finish action on other key priorities, such BBB, addressing the national debt ceiling and the National Defense Authorization Act (NDAA). Congress finished work on the national debt and NDAA, leaving the BBB as the major unfinished business. Congress will likely focus to complete work on a full fiscal year (FY) 2022 omnibus spending bill in advance of that February 2022 deadline, which could become a vehicle for tax legislation, such as tax extenders, especially if BBB is not done by that point.  As noted above, the 12.5% allocation increase expires at the end of this year, and is one of roughly two dozen other tax provisions expiring this year.

After completing work on FY 2022 spending, it is likely that congressional leadership will turn back to focus on finishing BBB if it is not done. At the time of this writing , it is too soon to tell what affordable housing proposals, if any, will survive a pared down BBB bill. While Manchin has not specifically targeting the $156 billion in HUD spending, the $12.7 billion in LIHTC proposals, or $5.9 billion for the NHTC, he has not specifically mentioned them as a priority either, and if the scope of the legislation is reduced significantly, the proposals may be cut. However, the Biden administration and congressional leadership remain strongly in support of the housing provisions, and they could still be retained. Stay tuned for an eventful first quarter of 2022 on the federal policy scene.

Help Rewriting QAPs Provides Opportunity for Clarity, Simplification
Rising Stars: Novogradac Spotlights Younger Leaders in Community Development
ESG Investing: Where it is Now; Where it’s Headed; What to Do
END_OF_DOCUMENT_TOKEN_TO_BE_REPLACED