The following analyzes the effect of each change and provides a rough estimate of the degree to which each change would reduce the number of affordable rental homes financed by the LIHTC over 10 years.

The reduction of the top corporate tax rate from 35 percent in 2017 to 20 percent in 2019 would reduce the tax loss benefits of LIHTC investments, since the value of depreciation expense deductions would be reduced. Novogradac & Company analysis found that lowering the corporate tax rate to 20 percent would reduce LIHTC equity by about 15 percent, translating to $1.8 billion or more in loss equity annually. This loss of investor equity translates into loss of 195,900 to 217,200 affordable rental homes, or more, over 10 years.

Much of this loss could be addressed through a two-step proposal to increase allocable LIHTCs and modernize the credit percentage formula.

2. Change to the depreciation/interest deductibility of LIHTC properties

The current draft of the Senate tax reform legislation would change the inflation adjustments throughout tax code from a factor based on the consumer price index for all urban consumers (CPI-U) to one based on a “chained” CPI-U. Many economists claim that the chained CPI-U provides a more accurate estimate of changes in the cost of living from one month to the next by accounting for the effects of substitution on changes in the cost of living. This change will decrease inflation adjustments in LIHTC and private activity bond allocations in future years, and would lead to a loss of 18,700 to 19,900 affordable rental homes, or more, over 10 years.

On balance, it appears that the current draft of Chairman Hatch’s tax reform legislation would reduce the total amount of LIHTC-financed affordable rental homes by about 267,000 to 293,000, or more, over 10 years. Furthermore, given the lower financial feasibility under a lowered corporate rate, the changes would also result in rental homes that would likely serve higher average income levels, provide fewer amenities and/or social services.

That significant reduction in housing production would also mean the loss of more than 330,000 jobs and billions of dollars in business income and federal, state and local tax revenue across the United States. 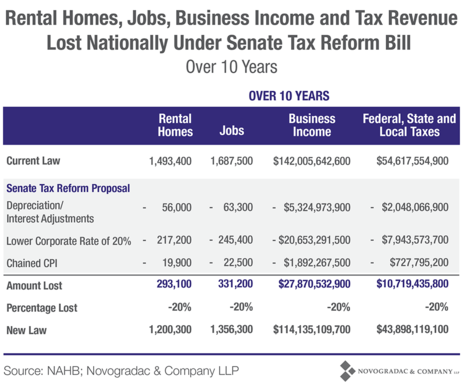 Here is how these losses would break down by state:

Based on these estimates, here are the states that would suffer the most adverse impacts: 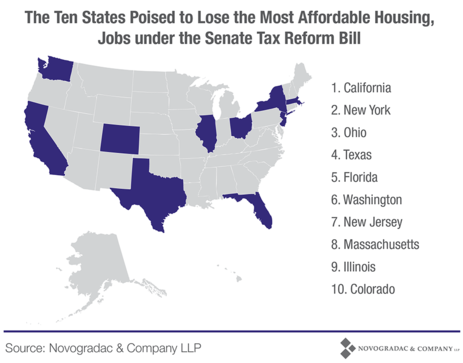 [Note: This post is based on the initial Chairman’s mark. The final bill approved by the Senate Finance Committee shortened the 40 year cost recovery period to 30 years. Also, the final bill includes a base erosion tax that has provisions that would adversely affect the value of community development tax credits. This blog post has not been updated to account for these two items.]