Senior Properties Have Lower NOI For the First Time

In the seven years Novogradac has analyzed operating and expense data for low-income housing tax credit (LIHTC) properties, operating expenses for buildings geared toward senior tenancy have been consistently lower than for family properties. The 2018 Novogradac Multifamily Rental Housing Operating Expense Report shows that in 2016, the most recent year for which data was available, operating expenses for family properties were 6.1 percent higher than senior properties, a difference of $283. 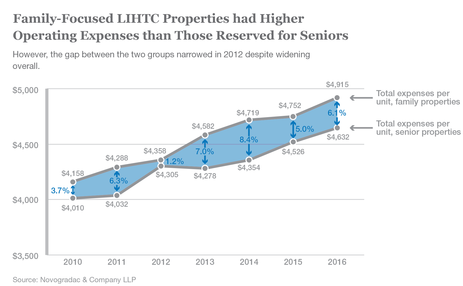 Since 2010 the spread between senior and family properties remained consistent, with the exception of 2011 to 2012, when there was just a $53 difference between the two. During this period there was a 6.8 percent increase in senior expenses, which coincided with a smaller than usual increase in family expenses of just 1.6 percent. Despite the closing of the gap in 2012, the difference between family and senior expense returned to normal levels in subsequent years.

What is new is that in 2016, while senior expenses are still lower than family expenses, senior LIHTC income per unit was also lower than that of family LIHTC units. As a result, senior net operating income (NOI) was 3.7 percent lower than family NOI in 2016. This is the first time in the history of Novogradac’s survey that family NOI outpaced senior NOI. 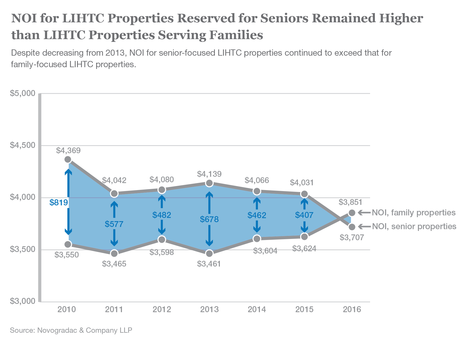 The continued trend of senior and family operating expenses and the reversal of NOI standing are more thoroughly explained in the 2018 Novogradac Multifamily Rental Housing Operating Expense Report, including discussions on which categorical expenses are most likely to determine the costs of maintaining LIHTC properties and how the geography of a development affects its operating expenses.