The identical companion bills would provide an indefinite extension of the new markets tax credit (NMTC), increase the annual allocation amount to a little more than $5 billion (see below for more details), annually adjust allocation authority to inflation, and provide alternative minimum tax relief to NMTC investors, putting the NMTC on equal footing with the low income housing tax credit (LIHTC) and the historic tax credit.

The bill has added importance this year as the NMTC will expire at the end of 2019 unless Congress acts.

Except for 2008-2009, the NMTC annual allocation authority has been set at $3.5 billion since 2006, as established in the Community Renewal Tax Relief Act (CRTRA) of 2000, the legislation that created the NMTC. Unlike LIHTC or private activity bond volume cap authority, which has benefitted from annual inflation adjustments as established by CRTRA, annual NMTC allocations have not been adjusted for inflation, leading to a substantial loss of investment. The below chart illustrates how implementing an annual inflation adjustment would restore the value of NMTC authority from 2001 and projects future annual authority. 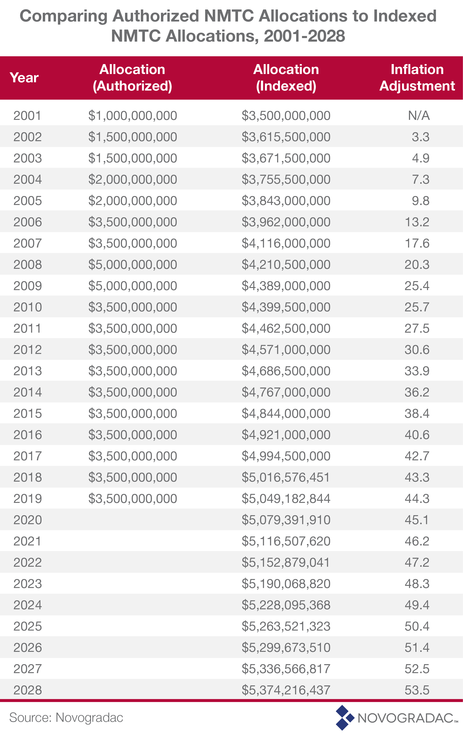 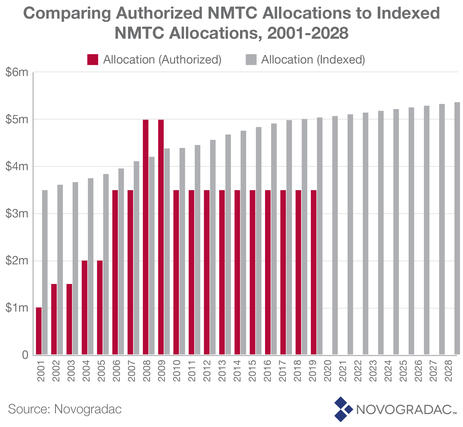 Congress has traditionally considered and passed extensions of the NMTC along with extending other expired or expiring tax provisions in legislation often referred to as “tax extender” or simply “extender” bills. Most of time, Congresses considers these bills in December, but that has not been the case recently. Former House Ways and Means Committee Chairman Kevin Brady, R-Texas, attempted to move an extenders bill at the end of 2018, but the government shutdown prevented it from advancing. On Feb. 28, Senate Finance Committee Chairman Chuck Grassley, R-Iowa, and Ranking Member Ron Wyden, D-Ore., introduced the Tax Extender and Disaster Tax Relief Act of 2019, to address provisions that expired at the end of 2017 and 2018. Grassley announced his intention to advance the bill as soon as possible with a goal of passing final legislation before April 15, but because the Constitution requires that revenue bills originate in the House, the fate of those provisions await House action.

The same day the NMTC permanence bills were introduced, the House Ways and Means Select Revenue Measures Subcommittee held a hearing on temporary policy in the tax code, helping to give some momentum to the issue in the House. It is expected that the Ways and Means Committee will consider extenders legislation in the next work period, March 25-April 12.

The Grassley-Wyden extenders bill as introduced did not include an extension of the NMTC, or any other provision expiring in 2019 or later, but the Select Revenue Measures Subcommittee Chairman Mike Thompson, D-Calif., was quoted by the press after the hearing to suggest that the House may broaden the scope of the legislation. If that turns out to be the case, it may provide an opportunity for a NMTC extension, possibly even a multi-year extension, but permanence doesn’t appear likely as of the writing of this post.

A more likely legislative vehicle for making the NMTC permanent would be a bill to increase the tight defense and nondefense spending caps for fiscal year (FY) 2020, as similar legislation to increase spending caps for FY 2018 and FY 2019 in February 2018 included tax provisions. Similarly, as the debt limit suspension expired March 1 and Treasury will only be able to use “extraordinary measures” to avoid breaching the limit until later summer/early fall, legislation to address the debt limit could also serve as a vehicle for NMTC permanence. Lastly, if major infrastructure legislation were to gain momentum, it too could serve as a vehicle for an indefinite NMTC extension.

One issue that presents a challenge for permanence is the reinstitution of the pay-as-you-go (PAYGO) rule in the House this Congress. The PAYGO rule requires that legislation that increases mandatory spending or decreases revenue (like NMTC permanence legislation would) be offset with revenue increases or spending cuts so that the deficit is not increased. That means making the NMTC permanent will require an offset, which often can lead to opposition, even among members of Congress who would otherwise support NMTC permanence.

Fortunately, one cannot understate the value of having the strong support of the Ways and Means Committee Chairman, Richard Neal, D-Mass. The longtime champion of the NMTC and making it permanent is now in a position to advance it.