At the Bipartisan Policy Commission (BPC) housing summit one of the proposals discussed was President Barack Obama’s proposal to allow the conversion of tax-exempt private activity bonds (PABs) into 9 percent low-income housing tax credits (LIHTCs).This conversation brought up important concerns about the current health of the PAB market and the national economy. The Internal Revenue Service’s (IRS) recent release of 2011 data about qualified residential rental bond issuance on a state level (sometimes referred to as multifamily housing bonds) reveal trends that place those concerns in some context.

The IRS’ recently released, and most current data show only 14 states issuing more residential rental bonds in 2011 than in 2010. There are probably a few more states that did so, but some states choose not to disclose publicly how much of their total PAB issuance was allocated to multifamily housing bonds. In 2010, 35 states and territories (including Puerto Rico and Washington, D.C.) issued residential rental bonds, according to the IRS. Similarly, in 2011, 35 states (including Washington, D.C.) did so. The states and territories that issued bonds in 2010 but not 2011 were Alabama, Alaska, Kentucky, Mississippi, Oklahoma and Puerto Rico. Conversely, Arizona, Hawaii, Idaho, Nevada and Rhode Island didn’t issue residential rental bonds in 2010 but did so in 2011.

IRS data shows that eight states issued fewer residential rental bonds in 2011 than 2010, and 11 states issued zero in both years. The decline in bond issuance was influenced by many factors, including the expiration of New Issue Bond Program, which used Treasury funds to purchase PAB. This factor, among many others, limited states’ ability to issue multifamily housing PABs. While the multifamily housing bond market had begun to heal by 2011, the road to recovery remained long.

Changes from the Peak 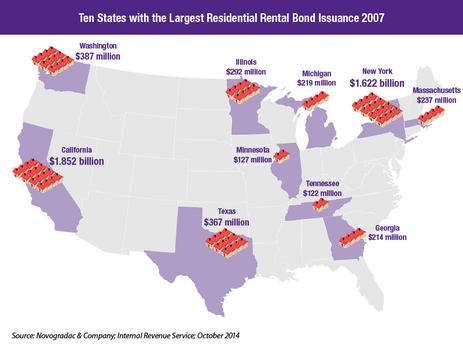 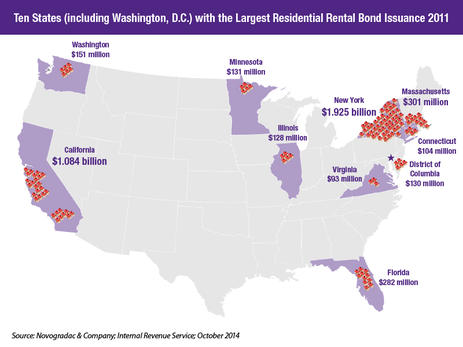 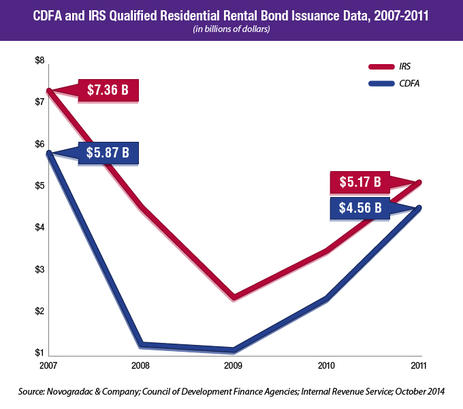 While the IRS data confirm the broader story of weak, but recovering multifamily bond markets told by other datasets, analysis of state level trends also tells a more nuanced story of local variation. Recovery from the recession hasn’t been evenly distributed. Some states’ multifamily housing bond markets have roared back to life following the 2008 financial crisis, but many remain quietly mired in post-crisis malaise.