As changes to Community Reinvestment Act (CRA) regulations are considered and developed, it is imperative to consider how those changes could affect regulated financial institutions and their investment and lending activities. For example, the Urban Institute’s Housing Finance Policy Center’s recently released report, “The Community Reinvestment Act: Lending Data Highlights,” sheds important light on multifamily mortgage trends and how they can be instrumental in meeting CRA standards.

Since 1995, when the last significant CRA regulatory reform occurred, there have been tremendous changes and developments in the banking industry, many of which significantly affect CRA implementation and practice. In November, community development stakeholders submitted comments in response to the advance notice of proposed rulemaking (ANPR) to modernize the CRA issued by the Office of the Comptroller of the Currency (OCC) in August. Novogradac’s Low Income Housing Tax Credit Working Group, New Markets Tax Credit Working Group and Opportunity Zones Working Group provided comment letters addressing the possible changes to CRA regulations.

While there are three federal banking regulating agencies charged with CRA implementation — OCC, the Federal Deposit Insurance Corporation (FDIC), and the Federal Reserve Board of Governors (Federal Reserve) — any proposed rules to change CRA requirements issued by the individual agencies would only apply to the banks they regulate (the probability of this is low as it is unlikely banks would accept multiple CRA compliance regulations). The OCC currently regulates just more than 20 percent of the nation's banks, though those banks combined have more total assets than those regulated by either FDIC or the Federal Reserve—about 70 percent of all covered financial institution assets—and regulate the vast majority of low income housing tax credit (LIHTC) and new market tax credit (NMTC) investors. And while the OCC issued the ANPR on its own, it is likely the OCC intends to use the responses to this notice to engage both the FDIC and the Federal Reserve in a conversation on a proposed rule. Through a collaborative process the agencies could create a proposed rule that would apply to all regulated banks.

Financial institutions are evaluated based on their size and operating procedures. There are three tests by which large financial institutions (‘banks’ with $1.202 billion or more in assets) are judged: the lending test which includes all lending activity, including community development loans; the investment test by which all qualified investments are evaluated; and the service test, which looks at retail and community development services. Each test accounts for a percentage of points with lending being worth 50 percent of total points, investments are 25 percent and services the remaining 25 percent.

While the Urban Institute research focuses on lending trends, many financial institutions invest in low-income housing, new markets, historic and renewable energy tax credits, in part, to generate CRA investment test credit. Banks have also been known to maximize their CRA credit by coupling LIHTC equity investment with a loan. An estimated 85 percent of annual LIHTC equity investment is provided by banks subject to the CRA, according to the Affordable Housing Investors Council (AHIC). Novogradac’s 2017 survey of LIHTC investors for AHIC found that when evaluating an LIHTC investment, CRA needs and goals were among the top valuation metrics. Anecdotal information suggests that an even greater percentage of NMTC investors are CRA-motivated as compared to LIHTC investors, though more research is needed to corroborate this view. It is also this demand, and whether an institution believes that it will receive CRA consideration for its tax credit equity investments, that can lead to differentials in equity pricing. In addition to the LIHTC and NMTC, the newly created opportunity zones (OZ) incentive is possibly another tool that could provide banks with incentives to invest in low income communities. As banks may receive positive CRA consideration for NMTC investment activities in their assessment areas, the Novogradac Opportunity Zones Working Group has been examining ways in which investing in OZs could be used to meet CRA obligations.

How CRA Changes Could Affect Lending

To understand what any changes to CRA provisions may mean, it’s important to understand banks’ overall lending patterns and what this means in terms of meeting their CRA requirements.  The Urban Institute’s report “The Community Reinvestment Act: Lending Data Highlights,”  was commissioned by the National Association of Affordable Housing Lenders, and looked at single-family and multifamily mortgage lending, as well as nonmortgage lending (this includes small business, small farm and community development lending), using 2016 Home Mortgage Disclosure Act (HDMA) data and CRA files from the Federal Financial Institutions Examination Council (FFIEC). As noted in Novogradac’s LIHTC Working Group’s CRA comment letter, CRA regulations are closely tied with the success of the LIHTC. In this regard, multifamily mortgage trends are of particular importance. It should be noted that for all banks, of the 1.93 million housing loans made just 1 percent are multifamily loans. While the overall share of multifamily loans is small, the research showed that multifamily loans are instrumental in meeting CRA standards. In terms of targeted lending, a larger percentage of banks’ multifamily lending is low- and moderate-income (LMI) lending (47.6 percent) compared to banks’ single-family lending (26.5 percent). For the report, LMI multifamily lending was considered to be loans made in LMI census tracts. While there are caveats, the researchers had to make certain assumptions based on the data that was available, 80 percent of LMI multifamily lending was found to be CRA eligible. 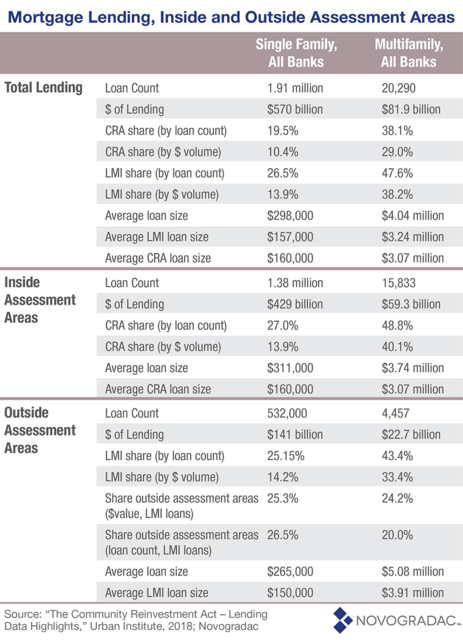 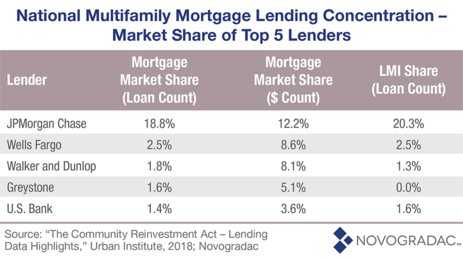 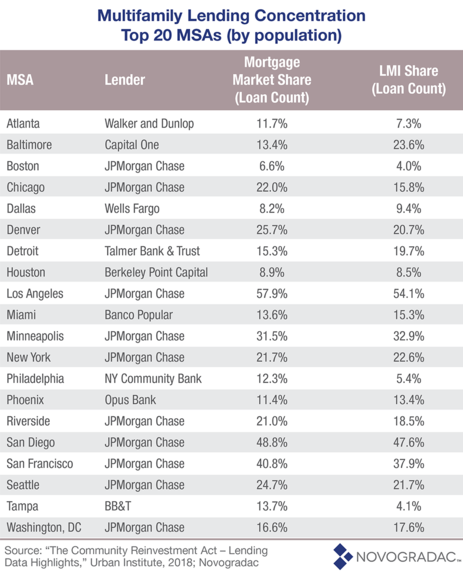 In addition to assessments of how banks are meeting their CRA obligations and the benefits realized by the LMI community, the data provided in the Urban Institute’s report provides a helpful starting point for CRA regulatory reform conversations.. When 2018 HDMA data is release it will include new data points, mainly as a result of Dodd Frank Act requirements being implemented. For example, lenders will be required to report the number of homes contained within multifamily properties receiving loans.

The LIHTC and NMTC have become highly efficient public-private partnerships over their histories, and the CRA has been a primary motivating force in incentivizing private sector investment in affordable housing and community development. Looking forward, it will likely be approximately two years before any final rules on CRA reform are effective. The earliest a proposed rule would be issued would likely be in the second half of 2019, followed by a probable public comment period of 60 days, public hearing(s) thereafter and a final rule sometime in 2020, possibly effective at the beginning of 2021. In the meantime, Novogradac will continue to monitor and report on the release of CRA related data and ways in which tax credits can be used to assist banks in honoring their CRA commitments.