Congress recently passed the $1.5 trillion fiscal year (FY) 2022 omnibus spending bill, H.R. 2471, which provided $295 million in funding for the CDFI Fund Program Account. The administration March 28 requested $331 million for the CDFI Fund in the FY 2023 budget. This account designates funding for the CDFI Fund and its programs, including the new markets tax credit (NMTC). The CDFI Fund, which is operated by the U.S. Department of the Treasury (Treasury), certifies CDFIs, administers financial awards to eligible organizations, and provides and promotes investment into businesses, affordable housing and other community and economic development activities in low-income communities. While CDFIs and MDIs benefit from this funding, other recent and significant funding for CDFIs and MDIs is the $12 billion authorized by the Consolidated Appropriations Act of 2020 (H.R. 133), also known as the FY 2021 omnibus spending law, which included a significant COVID relief title which also authorized a five-year extension of the NMTC and established the 4% floor for the low income housing tax credit.  This unprecedented level of funding authorized $9 billion in lending capital and $3 billion in grants towards financial and technical assistance for pandemic recovery. Nearly 75% of CDFIs’ lending is provided to underserved populations and distressed areas, so they, along with MDIs, are essential for investments into these communities. An additional $12 billion in funding goes a long way in furthering the mission of these organizations, particularly in the face of the ongoing recovery from the economic hardships brought on by the COVID-19 pandemic.

The ECIP program began accepting applications March 4, 2021, and announced its selection of recipients to receive more than $8.7 billion on Dec. 14, 2021. The 186 institutions to receive investment, which ranged from less than $100,000 to more than $200 million, are headquartered in 36 states, the District of Columbia, and Guam. The states with the greatest representation of CDFIs and MDIs include Louisiana, North Carolina, California, Texas and Mississippi. Of the allotted $9 billion, $3.1 billion was being offered to MDIs. Secretary of Treasury Janet Yellen categorized this investment as, “relief legislation with equity in mind.”

The remaining $3 billion, from the $12 billion total, in targeted funding was divided into the CDFI Rapid Relief Program (CDFI RRP) and to support minority lending institutions. CDFI RRP had an expedited timeline in which to award funds where the application round opened Feb. 25, 2021, applications were due March 25, 2021, and awards were made June 15, 2021. Awards totaling $1.25 billion were made to 863 certified CDFIs, the highest number of CDFI recipients in one round. All awarded CDFIs are required to use their funds within two fiscal years and maintain reporting requirements. Awardees have yet to be required to submit information on how they have used their awards, but information gleaned from applications demonstrates certain trends on CDFI interest and CDFI location.

The chart below shows the different types of organizations that received awards through the CDFI RRP and the amount awarded. 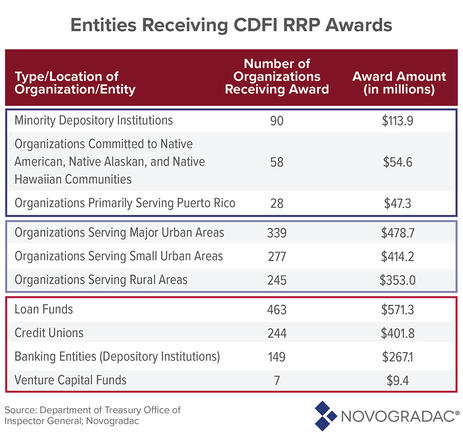 The Treasury also created the Minority Lending Program to distribute the remaining $1.75 billion in funds, funds that are to be used to increase lending, grant making, or investment activity of CDFIs and MDIs. The plan is to have these funds made available to support minority communities by Spring 2022.  Of these funds, $1.2 billion is reserved for MDIs and $550 million will be awarded to CDFIs with a minority lending focus.

In light of the historic amount of funding made available to CDFIs and MDIs, recent Congressional hearings discussed these organizations, during which members expressed bipartisan support, and new legislation was presented.

On January 5, the Senate Banking, Housing and Urban Affairs Committee held a hearing titled “Exploring How Community Development Financial Institutions Support Underserved Communities.” During the hearing, both Sen. Chris Van Hollen, D-Maryland, and Sen. Elizabeth Warren, D-Massachusetts, mentioned the FY 2021 omnibus spending law and celebrated the bipartisan passing of said legislation. John Holdsclaw, president of the CDFI Coalition, called the legislation a “game changer” and testified he had not received any complaints from his members regarding the ECIP or the CDFI RRP program roll outs. Sen. Mike Rounds, R-South Dakota, stated that CDFIs’ and MDIs’ “staff members know how to bridge the gap between cash economies and traditional financial products,” and can therefore service small and urban businesses best for longevity and overall financial success. Sen. Steve Daines, R-Montana, called for permanence for the NMTC and asked all the witnesses to share their perspective on the incentive’s impact. He was one of the original cosponsors of the New Markets Tax Credit Expansion Act of 2021 (S. 456), which would make the NMTC permanent. As detailed in his witness testimony, Frank Altman, Founder and CEO of the Community Reinvestment Fund, USA, suggested the NMTC incentive be indexed with inflation to maintain community impact year over year and implored the Senate to make NMTC permanent.

During the Senate’s second hearing on February 9, titled “The Role that Community Development Financial Institutions and Minority Depository Institutions Serve in Supporting Communities,” Chair Raphael Warnock, D-Georgia, continued the discussion surrounding communities in crisis and how CDFIs can be utilized to support recovery post COVID-19. Ranking Member Sen. Thom Tillis, R-North Carolina, stated that CDFIs and MDIs are important to the economic and financial ecosystems throughout the United States. Robert James II, president and CEO of Carver Financial Corporation and the chairman for the National Bankers Association (NBA), testified that only $1.2 billion in ECIP funding has been distributed thus far, with the remaining ECIP program balances earmarked. Currently, black-owned banks only control 0.027% of total bank assets in the Unites States and through the ECIP program, NBA members are eager to employ innovative lending solutions aimed at increasing this percentage and addressing the needs of LMI populations.

On February 16, the House Financial Services Committee held a hearing titled, “An Unprecedented Investment for Historic Results: How Federal Support for MDIs and CDFIs have Launched a New Era for Disadvantaged Communities.” In the hearing memo, Chairwoman Maxine Waters, D-California, highlighted the $12 billion provided in the FY 2021 omnibus spending law. She additionally emphasized that the ECIP program received $16 billion in capital requests,  $4 billion more than the $12 billion available, showing that the need for community development funding is greater than the current funding level. Nicole Elam, the CEO of the NBA, reported that out of the total ECIP fund recipients, 57 are MDIs and will receive a total of $3.1 billion.

Additionally, the House Subcommittee introduced nine bills in support of CDFIs and MDIs during this hearing. These bills are listed below: 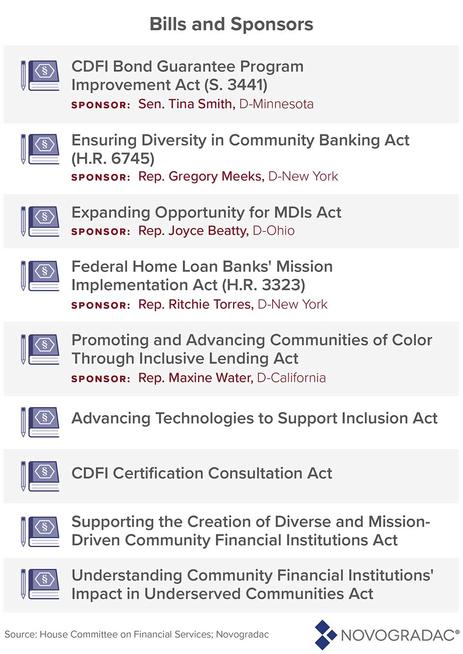 One proposal worth noting is reducing the CDFI Bond Guarantee Program minimum issuance threshold from $100 million to $25 million, which would allow for greater credit lending to LMI communities. Many smaller CDFIs are barred from the Bond Guarantee Program because they cannot support a $100 million bond and lowering this minimum to $25 million would allow more CDFIs to access capital through this program. A major theme of these proposed House bills is to work to counter the closings of MDIs in historically disfranchised and diverse communities. Since 2012, one in four MDI’s has closed and one in three of all bank branches have closed in LMI communities. 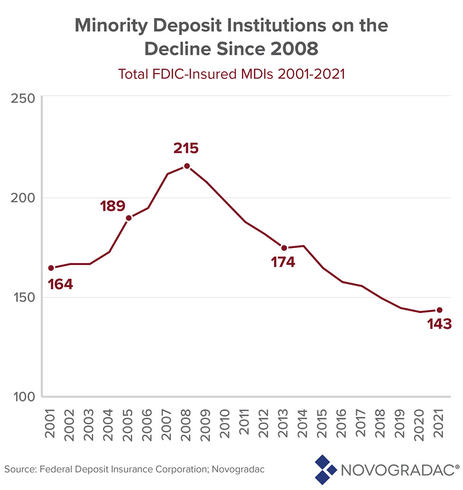 Opportunity and Call for Action

Though the focus of the hearings was the historic investment in CDFIs and MDIs and the importance of these entities, little has been reported on the specific investments the $12 billion was allocated towards. To fully understand how this funding has been used and how it has impacted low-income communities affected by the COVID-19 pandemic, more information is needed. These funds also are intended to help these communities recover from the current high levels of inflation and from being historically underserved.

While the $12 billion provided needed pandemic relief, it was a one-time investment. Other programs, including the NMTC, can provide more long-term funding for CDFIs and MDIs so that they can continue to invest in distressed communities. CDFIs support permanence for the NMTC, allowing it to continue to provide needed investments into these communities, When Congress turns its attention back to a pared down version of the Build Back Better Act reconciliation bill–which will likely be following the confirmation of the Supreme Court nominee and its Easter Recess–CDFIs and other organizations will urge Congress to include NMTC permanence in such a revised reconciliation bill. The September 2021 House version of the bill included permanence for the NMTC and community development advocates hope to see that provision make it into future versions of the bill.