The federal legislation allocated an extra $98 million ($980 million 10-year credit) in 9 percent LIHTCs to California for 2020 to help rebuild from major fires that devastated communities in more than a dozen counties in 2017 and 2018, destroying more than 32,000 structures.

The $98 million is in effect, approximately one extra year’s worth of LIHTCs for California, a state taking extreme steps to address its affordable housing problems.

How the $98 million figure was reached is important. The federal legislation called for the state to receive the lesser of 50 percent of the sum of the housing credit ceilings for California for calendar years 2017 and 2018, or the total LIHTCs allocated in 2017 and 2018 in counties that qualify as federally declared disaster areas. The latter was the lower figure, so the state will receive $98 million in additional LIHTCs in 2020. Novogradac prepared the below schedules showing these two calculations. 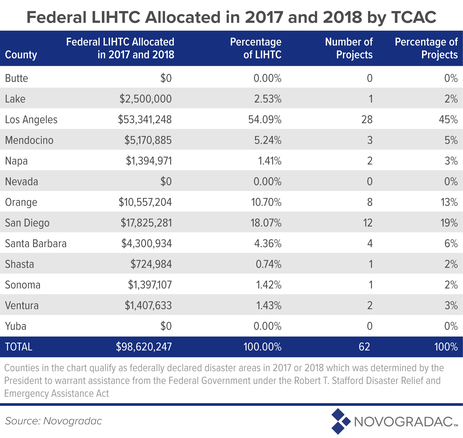 At a public hearing in Oakland on Jan. 29, Judith Blackwell, executive director of TCAC, said proposed regulations for the extra LIHTCs will be adjusted, to reflect feedback from both federal legislators and local officials, including suggestions that suggested areas devastated by the fires should get their share of extra LIHTCs to help with rebuilding.

For example, nearly 19,000 structures were destroyed in Butte County in northern California in the Camp Fire in November 2018, so apportionment based on damage would apportion a very large amount to Butte County. The same could hold true for other counties with extensive damage

However, there are also policy arguments for the apportion formula to follow where the demand for LIHTCs has been the highest in recent years. In that case, TCAC would apportion credits similar to federal formula used to determine the total credits shown in the table above, granting a very large amount to Los Angeles County. This would result in Butte County receiving little to none of the LIHTC authority even though Butte County lost more than half the structures statewide in the 2017-2018 wildfires. Same for Sonoma and Napa counties, which lost more than 6,000 structures in 2017-2018 blazes, but only received a combined 5 percent of the LIHTCs allocated over those two years. Based on low demand, those counties would receive a low apportionment if the federal formula is applied without change.

Additionally, TCAC indicated at a public hearing at the beginning of January that these additional $98 million of credits might first go toward addressing homelessness – split evenly between permanent supportive housing for homeless and single-room occupancy housing (SRO) housing – as a way to address the state’s widespread homeless crisis.

Some industry participants also have suggested that the total $98 million of additional credits simply be apportioned using the existing TCAC system.

Regardless, under the TCAC proposed regulations dated Jan. 22, applications will be required to score maximum points on their application to qualify for the additional allocation, although TCAC did not explain how it would rank the developments if the credits are oversubscribed. The allocation committee also proposes to allow the 130 percent boost for all properties awarded the extra LIHTCs.

If the disaster-affected counties don’t exhaust the extra allocation, TCAC proposes that the credits be allocated first to housing for homeless and then to SRO housing.

The proposed regulations called for TCAC to evenly divide the additional LIHTC allocation between the first and second round of 2020 allocations. The first round has a March 9 application deadline; the second-round application deadline is July 1. However, at the public hearings representatives of some areas affected by fires indicated they’re not ready to rebuild this year, so TCAC will probably split the credits between 2020 and 2021. Although it’s a 2020 federal allocation, TCAC is allowed to carry it over one year to 2021.

However, if TCAC does not use all the credits in 2020, and carries some over to 2021, then TCAC will not be eligible for the national pool of any unused 2020 credits from other states.  TCAC has received approximately $400,000 ($4 million 10-year credit) from the national pool each year over the last few years. To preserve TCAC’s eligibility for the national pool, some members of the affordable housing community have suggested that if certain disaster areas need more time (until 2021 to receive the credits) then perhaps TCAC could allocate all of the credits in 2020 (both the 2020 state ceiling based on population and the additional $98 million in credits), then set aside some credits for the disaster areas in 2021 from the 2021 state ceiling based on population. This option would allow the disaster areas more time and still preserve TCAC’s eligibility for the national pool.

That is an important option for many of the fire-ravaged locations, since some are not ready to begin rebuilding. However, the credits cannot be carried forward to 2022, so any unused credits following the 2021 allocation rounds might be made available to developments for homeless that are applying for credits in 2021.

Those wishing to express views on the proposed regulation changes can submit written comments to TCAC by Feb. 12 at 5 p.m. Comments can be emailed to [email protected] or [email protected].