The FCAA federal legislation allocated an extra $98 million ($980 million 10-year credit) in 9 percent LIHTCs to California for 2020 to help rebuild from major fires that devastated communities in more than a dozen counties in 2017 and 2018 that destroyed more than 32,000 structures. California typically allocates just more than $100 million in 9 percent LIHTCs each year. As such, the $98 million provided by the FCCA is, in effect, approximately one extra year’s worth of LIHTCs for California.

TCAC proposes to apportion the LIHTCs as shown below amongst the 13 fire-damaged counties, generally based on the number of structures destroyed in each county. If adopted, the proposed regulations would apply to the second round of competitive 9 percent applications due July 1, 2020, but the proposed regulations called for TCAC to have the FCAA LIHTC fall under a separate apportionment that has different point requirements and a drastically different tiebreaker. 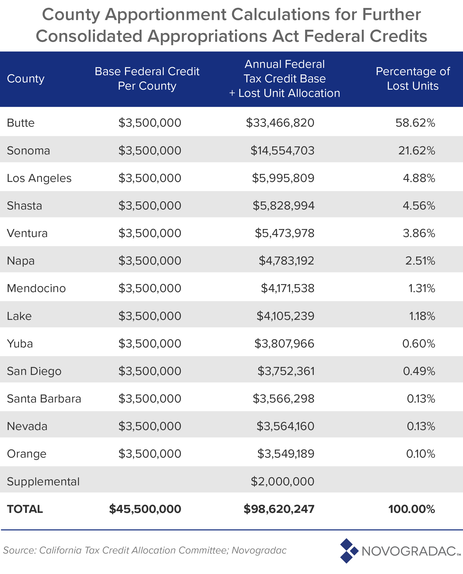 To put this chart in perspective, the existing 9 percent LIHTC pool estimated for the July round for the Northern Region that includes Butte, Marin, Napa, Shasta, Solano and Sonoma counties is approximately $1.5 million. This pales in comparison to the $58.6 million of FCAA LIHTC in total for Butte, Shasta, Napa and Sonoma.

The proposed regulations recommend that the FCAA LIHTCs be allocated beginning in the second round of competitive 9 percent applications due July 1, 2020 and continue to be allocated through the second round of 2021 until all of the credits are claimed. If there is remaining apportionment in any of the 13 counties after the second round of 2021, the remaining LIHTCs will then be used to fund any qualifying developments in the damaged counties that had already used all of their apportionment. If there is any remaining amount after that, it would be used to fund homeless assistance developments.

TCAC proposes not to recommend investments for FCAA LIHTCs where the local reviewing agency (LRA) opposes the development, because local agencies have emphasized the importance of their involvement in the process as they rebuild their communities.

TCAC proposes the changes below to developments requesting FCAA LIHTCs.

In light of the need for housing in these devastated communities and the lack of infrastructure and resources, as well as anticipated delays, TCAC proposes to only score applications applying for FCAA credits based on a subset of the point scoring categories with a tie breaker based on the number of proposed tax credit units.

TCAC has a June 17 target date for adopting the proposed regulations. TCAC will hold public hearing May 7 and comments may also be submitted through May 18 to [email protected] and [email protected].