Since the enactment of the opportunity zones (OZ) tax incentive, which was designed to increase private capital investment in low-income communities and low-income community businesses, there has been great interest in using the new incentive to create more affordable rental housing. Participants in the OZ incentive are not limited to investing in affordable rental housing, but the incentive has aspects that are attractive to affordable housing developers and investors. For example, OZs aren’t subject to an allocation limit such as the low-income housing tax credit (LIHTC). Moreover, a LIHTC property located in an OZ may be able to attract additional equity by virtue of more favorable equity pricing, thereby reducing the need for gap financing, which is often not readily available in OZs. A more detailed discussion on the use of OZs to finance rental housing can be found in “New Opportunity Zones Could be Used to Finance Rental Housing.”

And while the second tranche of proposed OZ regulations issued by the Treasury Department provided further clarity on the OZ incentive, there are several crucial areas that either remain unclear or the guidance provided is unfavorable to investors interested in investing in LIHTC developments in OZs.  Additional, and modified, guidance is needed and has been requested in the Opportunity Zones Working Group’s July 1, 2019 comment letter to the IRS.

Historically, commercial banking institutions have been the largest LIHTC investment provider. However, OZ investments are limited to capital gains, and this makes it highly unlikely that commercial banking institutions will be the primary source of additional OZ capital.  Commercial banks typically have a limited and unreliable supply of capital gains and invest in LIHTC developments in OZs primarily for Community Reinvestment Act (CRA) credit, with little regard to the OZ benefits.  Therefore, non-bank investors will likely need to be the source of additional capital for affordable rental housing in OZs.

The second tranche of proposed OZ regulations has had the unintended consequence of diluting the value of the tax benefits when twinning the OZ tax incentive with the LIHTC.  This devaluation of the OZ tax incentive will place downward pressure on the demand of non-banking investors for a combined OZ and LIHTC investment.  As a result, the ability to raise additional capital for LIHTC properties located in OZs is diminished.  Furthermore, if an OZ is located in a CRA assessment area, non-banking investors may be priced out of potential investments as a result of commercial banks paying a premium for affordable housing investments in their CRA assessment areas.

Treasury and the IRS can help attract additional capital by modifying three provisions contained in the proposed regulations:

Addressing these three issues would add more value to twinning the OZ tax incentive with LIHTCs, and attract more investment capital for the development and preservation of affordable housing that is so desperately needed.

A special rule proposed in the regulations requires partnerships and S corporations to modify the method for determining the amount of remaining deferred gain to include in income at Dec. 31, 2026. This special rule modifies the statutory method of taking the lesser amount of the remaining deferred gain or fair market value over the statutory basis adjustments on Dec. 31, 2026. These modifications require taxpayer’s gross income at Dec. 31, 2026 to be determined by taking the lesser of:

The intent of this special inclusion rule is to prevent an investor in a qualified opportunity fund (QOF) partnership from avoiding the recognition of deferred gain when the fair market value of the investor’s partnership interest has diminished due to debt-financed distributions. However, this rule creates inconsistent and inequitable results for debt-financed losses attributable to periods before Dec. 31, 2026 as compared to losses incurred thereafter.

In its July 1, 2019 comment letter to the IRS, the Opportunity Zones Working Group noted the special inclusion rule under the proposed regulations has had the unintended consequence of adversely affecting the ability to develop LIHTC properties in OZs, and will likely affect LIHTC equity pricing for OZ investments. IRC Section 42 requires that LIHTC properties be rent restricted for a minimum of 30 years, which means there is very little anticipated growth in annual net operating income.  Combined low expectations for growth in annual net operating income with current very low capitalization rates, means very little anticipated appreciation in value.  Furthermore, many investments give nonprofits rights of first refusal to buy the property at debt plus taxes, which means any appreciation on housing investments doesn’t accrue to the tax credit investors. Without substantial appreciation, the 10-year gain exclusion benefit isn’t as valuable. However, the general FMV 2026 inclusion rule as provided in the statute does provide a benefit to LIHTC investors for the typical loss in value of LIHTC investments over time. The proposed regulations modified the statutory inclusion rule in a manner that reduces the value of the OZ incentive for LIHTC investors, thereby narrowing the pool of potential investors for LIHTC properties in OZs. 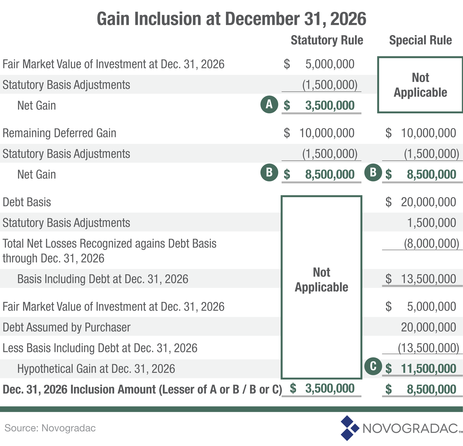 In this example, the hypothetical OZ LIHTC investor would be required by IRC Section 1400Z-2(b) to recognize capital gain equal to $3.5 million at Dec. 31, 2026. However, under the current language of the proposed regulations, the hypothetical OZ LIHTC investor would now be required to recognize $8.5 million of capital gain in 2026, significantly reducing the benefit owing to the OZ incentive.

This issue can be remedied by amending the language in the proposed rule to define fair market value as the net value of the investment, excluding debt plus prior cash distributions. As the OZ Working Group noted, this would prevent the artificial reduction of the investment value as a result of debt-financed distributions, would avoid inconsistent/inequitable results for debt-financed losses for periods prior to Dec. 31, 2026, and would potentially attract more investment in LIHTC properties located in OZs.

Commercial banks are the largest investors in LIHTC transactions. As discussed above, commercial banks face regulatory restrictions on investments for their own account and capital gain transactions are not recurring events Many banks organize their LIHTC investments in a single corporate subsidiary which is a community development corporation (CDC). CDCs allow banks to make public welfare investments (such as LIHTC investments) not otherwise generally allowed. However, bank capital gains generally come from other subsidiaries of the bank. For banks that do have capital gains to invest in a QOF, the proposed regulations prevent the bank from deferring the capital gain in a non-CDC corporate affiliate by having the CDC arm of the bank make the investment in the QOF. This removes the incentive for banks to have their CDCs invest in opportunity zones.

For the purposes of the OZ incentive, “substantial improvement” is defined as additions to the property’s basis during the course of any 30-month period after the acquisition of real estate that exceeds its adjusted basis at the start of the 30-month period. According to the proposed regulations, this test must be applied on an asset-by-asset basis. This is a more stringent requirement than the substantial improvement standard for LIHTC properties, which requires a taxpayer to spend the greater of $6,800 per unit or 20 percent of the adjusted basis of the acquired property over a 24-month period. In fact, an existing LIHTC property in an OZ may pass the substantial improvement test for the purposes of the LIHTC, but may fail for the purposes of OZs.

As recommended in its comment letter, the OZ Working Group proposed a change to the language in the proposed regulations to facilitate the qualification of an existing property. The final regulations should allow for an election to meet the substantial improvement test on an aggregate basis, for which the acquisition of tangible property over any 30-month period exceeds the aggregate adjusted basis of existing tangible property held at the start of the 30-month period.

Consider a hypothetical partnership that purchases an existing multi-family property with 100 units for $5 million in order to obtain acquisition/rehabilitation LIHTCs. Of the $5 million, $1 million is allocable to land (ineligible for tax credit purposes) and the remaining $4 million is allocable to the existing building. To meet the substantial improvement standard under the LIHTC incentive, the partnership must incur $800,000 in rehabilitation expenditures (20 percent x $4 million) as it is greater than $680,000 ($6,800 x 100 units). If assuming the acquired property was in fair condition at the time of acquisition, the partnership only needed to expend $3 million for rehabilitation. This is well above the $800,000 threshold. However, it would not meet the substantial improvement test for the OZ incentive, which would require the partnership to incur more than $4 million in rehabilitation expenditures.

The value and importance of facilitating the combination of OZ and LIHTC investments cannot be overstated. The potential increase in equity pricing would reduce the need for gap financing, making more LIHTC developments in OZs financially feasible, as well as enable further low-income community development without the displacement of low-income households from OZs. Given the tremendous need for affordable rental housing in OZs and nationwide, Treasury should change the OZ regulations accordingly. LIHTC properties located within OZs that are not within high demand CRA assessment areas would benefit greatly from the influx of capital as a result of increased equity pricing from non-CRA-motivated LIHTC investors. Whether these type of investors can maximize the tax benefits afforded to them by a combination of OZ and LIHTC incentives will depend on how Treasury addresses the issues described above.

To learn more about opportunity zones guidance, and how the OZ incentive can be used with other tax incentives, join Novogradac for the Novogradac 2019 Opportunity Zones Fall Conference in Chicago, Oct. 24-25. Featured speakers include Scott Turner, executive director of the White House Opportunity and Revitalization Council, Alfonso Costa, HUD’s deputy chief of staff, and John Lettieri, president and CEO of the Economic Innovation Group, among many others.