The Trump administration today released its $4.7 trillion fiscal year (FY) 2020 budget request, which includes $750 billion in defense spending including overseas contingency operations and other adjustments and $567 billion for nondefense spending including adjustments.  The proposed base nondefense discretionary spending cap is $543 billion, a cut of $54 billion from FY 2019 spending cap.

Of the nondefense discretionary budget, the administration requested $44.1 in gross U.S. Department of Housing and Urban Development (HUD) spending, a $9.6 billion (18 percent) cut from the amount appropriated in FY 2019, but $2.9 billion more than the FY 2019 request. 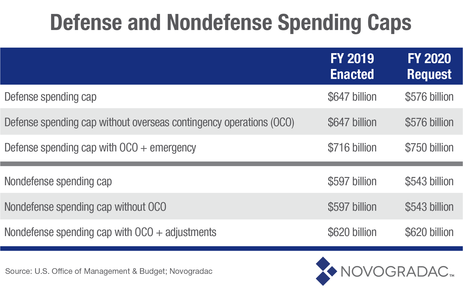 The FY 2020 blueprint provides $37.9 billion “to maintain services to all currently assisted low-income families,” which presumably covers HUD’s rental assistance programs, such as the Section 8 Housing Choice Voucher, Project-based Rental Assistance, Public Housing Operating Fund, expiration of Sections 202 and 811 rental assistance, McKinney-Vento Homeless Assistance Grants, and Housing for People With AIDS (HOPWA).  However, the blueprint continues to propose to reforms to require “work-able” individuals to pay more and subject them to work a minimum of 20 hours a week or participate in training or educational activities.  The Republican-controlled Congress considered these reform proposals in the past two budgets and rejected them.

Like the FY 2019 request, the FY 2020 blueprint proposes to eliminate the Housing Trust Fund and Capital Magnet Fund, and the Fannie Mae and Freddie Mac assessments that fund them.  On May 1, 2018, HUD announced $266.8 million for the 2018 Housing Trust Fund (HTF) allocations, and is expected to announce 2019 allocations in May. The U.S. Treasury’s Community Development Financial Institutions (CDFI) Fund announced Feb. 13 more than $142 million in awards for the 2018 round of the Capital Magnet Fund (CMF).  The administration last year had proposed to rescind the $142 million, but the Senate rejected the rescission. For the 2019 rounds, Novogradac is projecting about $246 million for the Housing Trust Fund and about $133 million for the Capital Magnet Fund.

Housing government sponsored enterprises (GSEs) Fannie Mae and Freddie Mac’s assessments to fund both programs are not discretionary appropriations, and housing finance reform legislation is expected to address whether Congress wants to continue them. Senate Finance Committee Chairman Mike Crapo, R-Id., released an outline in February of his housing finance reform proposal, which if enacted would increase funding for them.  Mark Calabria, currently the chief economist for Vice President Pence, has been nominated to be the permanent Federal Housing Finance Agency (FHFA) director, and the Senate Banking Committee approved his nomination along party lines on Feb. 26.  Calabria is expected to be confirmed by the full Senate this month or next.  During his hearing, Calabria pledged to continue the funding for the HTF and CMF “within the confines of the statute,” and he believed the economic conditions in the statutory provision enabling the FHFA director to suspend the GSE contributions are unlike to occur.

The FY 2019 budget, as with the FY 2018 request, proposes to eliminate all discretionary grant funding for the CDFI Fund, leaving funding only for administrative expenses of running the non-discretionary grant funding programs, such as the New Markets Tax Credit (NMTC) and the CDFI Bond Guarantee programs. The blueprint does not include an explicit request to extend the NMTC, which expires on Dec. 31.

No details are provided, but the blueprint documents includes savings from the elimination of the energy investment tax credit, accelerated depreciation option for renewable energy property, exclusion of utility conservation subsidies, and the credit for residential energy efficient property.

The administration is expected to release the full budget request March 18, with program-by-program funding level details.  The next step in the budget and appropriations process after the full budget request is submitted would be for Congress to consider a FY 2020 budget resolution. However, it is unlikely that the Democrat-controlled House and the Republican-controlled Senate will agree on a budget resolution.  Nevertheless, the House is expected to pass a FY 2020 budget resolution.  Doing so under House rules adopted for this Congress would send legislation to authorize an increase of the debt limit to the Senate, where it is expected to pass.  The debt limit suspension expired March 1, but Treasury should be able to take “extraordinary measures” to avoid breaching the limit until this fall, according to the Congressional Budget Office.

Given the blueprint’s request for a total of $8.6 billion in border wall funding and other security measures, something House Democrats are unlikely to support, that could present a challenge to passing even a continuing resolution to fund the government past Sept. 30 when FY 2019 ends.  A bumpy fiscal road lies ahead.