The Trump administration released its $4.4 trillion fiscal year (FY) 2019 budget request Feb. 12, which includes $716 billion in defense discretionary spending and $540 billion for nondefense discretionary spending, a cut of $49 billion from FY 2018 spending cap and $57 billion from the FY 2019 spending cap. Of the nondefense discretionary budget, the administration requested $41.2 billion (including $2 billion as proposed in the FY 2019 budget addendum) in gross U.S. Department of Housing and Urban Development (HUD) spending, a $6.8 billion (14.2 percent) cut from the amount appropriated in FY 2017, the last enacted long-term spending law, but $534 million more than the FY 2018 request.

The week before the FY 2019 request was released, Congress passed the Bipartisan Budget Act of 2018, which significantly increased the FY 2018 and FY 2019 defense and nondefense spending caps as outlined below: 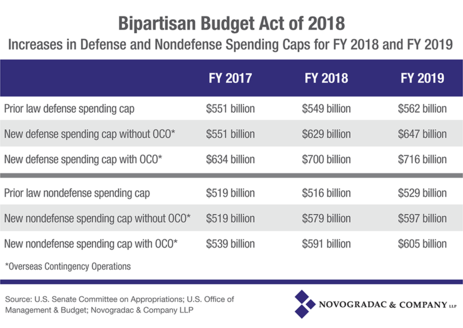 The passage came too late to be reflected in the main budget request documents, but the administration released an FY 2019 addendum document that proposes the fully fund defense programs, but only proposes a $10 billion increase from the prior law FY 2019 nondefense spending cap. The FY 2019 addendum provides an additional $2 billion to HUD from the funding levels proposed in the main budget documents. Of the additional amount for HUD, $1 billion would be used to maintain current rent rules for seniors and people with disabilities receiving rental assistance from the Housing Choice Voucher (vouchers), Project-based Rental Assistance, Public Housing Operating Fund, Section 202 Supportive Housing for the Elderly, and Section 811 Supportive Housing for People with Disabilities programs. Another $700 million would go to voucher renewal funding and $300 million for the Public Housing Operating Fund.

Highlights of the FY 2019 HUD program funding requests, including the addendum amounts, follow.

The request provides $10.87 billion (not including a portion of the $1 billion of the addendum amount) for Project-Based Rental Assistance, which is $50 million (0.5 percent) more than FY 2017 and $115 million (1.1 percent) more than the FY 2018 request, but less than what is likely to be approved in the forthcoming FY 2018 omnibus spending legislation. The budget notes that HUD will release proposals to achieve savings in rental assistance programs, which according to leaked documents last week appear to indicate that the administration will proposed increase tenant contribution toward rent from 30 percent to 35 percent of adjusted income and institute a minimum monthly rent of $150, among other proposals. However, as noted above, the administration will not implement these proposals for seniors or people with disabilities.

Tenant-Based Rental Assistance is proposed to be funded at $20 billion (including $700 million in voucher renewal funding, but not the portion of the $1 billion for rental assistance from the addendum), a $277 million (1.4 percent) cut from FY 2017 and $697 million (3.6 percent) more than the FY 2018 request. Of that amount, $18.2 billion is for Section 8 Housing Choice Voucher contract renewals, which is a $141 million (4.2 percent) cut from FY 2017, but $630 million (3.6 percent) more than FY 2018 request. As noted for project-based rental assistance, the budget also proposes to establish mandatory minimum rents, require increased tenant contributions toward rent–reportedly from 30 to 35 percent of adjusted family income–and institute other policies to achieve savings from HUD’s rental assistance programs. For the HUD-Veteran Affairs Supportive Housing (HUD-VASH) program, the request provides $4 million, which is $43 million (92 percent) less than FY 2017 and $3 million (43 percent) less than the FY 2018 request. The HUD-VASH funding is reserved entirely for Native American veterans, $3 million less than FY 2017. The request also provides $140 million for Tenant Protection Vouchers, a $30 million (27.3 percent) increase from FY 2017 and $80 million (133 percent) more than the FY 2018 request.

The budget proposes fairly dramatic cuts to public housing. It provides no funding for the Public Housing Capital Fund, which is $1.9 billion less than FY 2017 and $628 million less than the FY 2018 request; and $3.1 billion for the Public Housing Operating Fund (including $300 million, but not the portion of the $1 billion for rental assistance from the addendum), which is a $1.3 billion (28.6 percent) cut from FY 2017 $759 million (19.5 percent) from the FY 2018 request.

The budget proposes again to eliminate the cap on the Rental Assistance Demonstration (RAD) program and make it a permanent program. The FY 2017 omnibus spending law increased authorization from 185,000 public housing units to 225,000 public housing units and extended program authorization for public housing conversions to 2020. Furthermore, the request provides $100 million incremental funding to facilitate such conversions and would authorize RAD conversions of Section 202 properties. It is anticipated that the FY 2018 omnibus spending bill will also authorize RAD conversion of Section 202 properties, but it is unclear what, if any, incremental funding will be provided.

As in the previous budget request, the budget proposes to eliminate Community Development Block Grant (CDBG) formula grants and the HOME Investment Partnerships Program (HOME), a cut of $3 billion and $950 million, respectively. It should be noted that Congress rejected the administration’s proposed FY 2017 cut to CDBG and that both programs have bipartisan support. It is unlikely Congress will go along with repealing such programs. However, given that funding for these programs isn’t directly tied to specific families (indeed, they represent funding for future housing and community development activities), they are much more vulnerable than rental assistance funding.

Again, as included in the FY 2018 request, the budget proposes to eliminate the Choice Neighborhoods Initiative, which is designed to comprehensively revitalize high-poverty public and assisted housing communities. It received $138 million in FY 2017.  Furthermore, it proposes to rescind the unobligated Choice Neighborhood funding amounts.

The FY 2019 budget proposes to eliminate the Housing Trust Fund and Capital Magnet Fund, and the Fannie Mae and Freddie Mac assessments that fund them. Although no formal announcement has been made, in 2018 we expect about $290 million (an increase of $71 million from 2017) to be available for the Housing Trust Fund and $152 million for the Capital Magnet Fund (an increase of $32 million from 2017). Fannie Mae and Freddie Mac assessments are not discretionary appropriations, and housing finance reform legislation is expected to address whether Congress wants to continue them. Given the strong support of Senate Democrats for both funds, it is unlikely Congress will eliminate them.

However, the new tax law is expected to lead to Fannie Mae and Freddie Mac taking a draw on their line of credit with Treasury this year, because of the accounting change resulting from the reduced value of their deferred tax assets. When Federal Housing Finance Agency (FHFA) Director Mel Watt required Fannie Mae and Freddie Mac to begin setting aside funding in December 2014, he said that he would suspend those allocations if either or both enterprises had to take a draw from Treasury, putting into question whether the 2018 amounts will be available. Furthermore, it should be noted that Watt’s term as director ends next January, calling into question whether a future director will continue to require the enterprises to set aside funding while the enterprises are still under conservatorship.

The FY 2019 budget, as with the FY 2018 request, proposes to eliminate all discretionary grant funding for the CDFI Fund, leaving $14 million in funding for administrative expenses of running the non-discretionary grant funding programs, such as the New Markets Tax Credit and the CDFI Bond Guarantee programs. As it doesn’t require a subsidy, the budget proposes a $500 million authorization level for the CDFI Bond Guarantee program, equal to FY 2017 and the FY 2018 request.

Normally the Treasury Department releases a supplement to the budget request containing all of the administration’s tax proposals, also known as the “Greenbook.” However, the administration announced that due to tax reform enacted in December, there was no “Greenbook” prepared this year.

Instead, Congress will focus first on completing the FY 2018 appropriations process with a goal of enacting an omnibus bill before the continuing resolution (CR) funding the federal government expires March 23.

Although the establishment of the spending caps should facilitate the budget and appropriations process, given the austere funding requests in the FY 2019 budget request and the need for appropriations bills to get at least 60 votes in the Senate, it will be very difficult for Congress to draft and pass all 12 FY 2019 spending bills, including those providing funding for HUD and Treasury, before the end of the fiscal year on Sept. 30, particularly in an election year. Many policy insiders expect Congress to consider a new CR in September to fund the government into the new fiscal year until after the November midterm election.