(Editor’s note – a condensed version of this discussion will appear in February issue of the Novogradac Journal of Tax Credits.)

On Nov. 16, 2016 the U.S. Department of Housing and Urban Development (HUD) released a final rule implementing small area fair market rents (SAFMR). In the notice, HUD said, “The use of Small Area FMRs is expected to give [Housing Credit Voucher] tenants access to areas of high opportunity and lower poverty areas by providing a subsidy that is adequate to cover rents in those areas, thereby reducing the number of voucher families that reside in areas of high poverty concentration.”

Historically, area wide FMRs have been determined based on Section 8 program’s FMR area definitions which consist of the following three types of areas:

After the end of the three-year period, a 50th percentile FMR area was required to document that the higher FMRs are resulting in de-concentration of vouchers in lower opportunity areas or it will lose its 50th percentile status. Over the years many areas have lost their designation because they aren’t able to document that the higher rents are having the desired outcome.

According to HUD, research has shown that 50th percentile FMRs have not resulted in a de-concentration of voucher holders, i.e. tenants are not moving out of high poverty areas to higher opportunity areas that have a lower concentration of poverty. In fact, the studies cited by HUD show that much of the benefit of the increased 50th percentile FMR goes to landlords who collect the higher voucher rents in areas with higher poverty, lower opportunities for employment and worse school options.

Beginning with FY2018 HUD will begin requiring designated areas to use SAFMRs.  With the SAFMRs, HUD is attempting to help create actual incentives for tenants to move out of lower opportunity areas. Unlike the 50th percentile FMRs, the SAFMRs will be based on the actual rent of each zip code. As stated in the Federal Register:

HUD has considered various methodologies that would set FMRs at a more granular level. HUD's goal in pursuing the Small Area FMR methodology is to create more effective means for HCV tenants to move into higher opportunity, lower poverty areas by providing them with subsidy adequate to make such areas accessible and to thereby reduce the number of voucher families that reside in areas of high poverty concentration.

Under the new guidance HUD will begin publishing SAFMRs on a zip code basis. PHAs located in designated areas will be required to use the SAFMR when determining the HCV payment standard. In addition, PHAs not located in the designated area can choose to use  the SAFMR when administering the HCV program. All other programs that use FMRs would continue with area-wide FMRs unless the PHA specifically elects to use SAFMRs.

The following 24 areas will be required to implement the SAFMR for the HCV program starting in FY2018:

Impact to Project Based Vouchers

As mentioned earlier, only HCV in designated SAFMR areas are required to use the new SAFMRs. All project-based voucher (PBV) projects are exempt from this requirement, even those located in a SAFMR area. However, PHAs that are using SAFMR for its HCV program can use SAFMR for all new PBV projects. In addition, the PHA can use SAFMR on current PBV projects if the owner and the PHA mutually agree to the change. The final rules do not specifically state this, but it would appear that for existing projects, you may have some projects managed by the same PHA using SAFMR and some using area-wide FMRs. This determination would likely be made on if the SAFMR was higher than the area-wide FMR. However, once a PBV project chooses to use the SAFMR they are prohibited from reverting back to the area wide FMR.

HUD has a series of selection criteria used in determining which areas are required to use the SAFMR, including:

SAFMRs are designed to have the HCV payment standard better match the rent for each zip code and make it so that HCV holders can find housing in higher opportunity areas. Because of this some zip codes will have decreases in SAFMR from the area wide FMR and some areas will have increases. Unfortunately, this means that some HCV holders will see decreases in their payment standard if they choose to remain in their unit/zip code.

Although the SAFMRs are not required to be implemented until 2018, HUD has provided a schedule of the hypothetical SAFMRs. Based on our analysis, 3,880 zip codes are included in the 24 SAFMR areas, distributed is as follows:

The chart below shows how each area will be affected by the implementation of the SAFMRs. The decreases and increases in the chart were calculated by comparing the 2017 area wide FMR to the hypothetical 2017 SAFMR. HUD does not provide a spreadsheet comparing the SAFMR to the area wide FMRs for 2017, nor does it provide area-wide FMRs for each zip code. Therefore, it’s important to note that the amounts below were recreated by Novogradac and should be used for information purposes only. 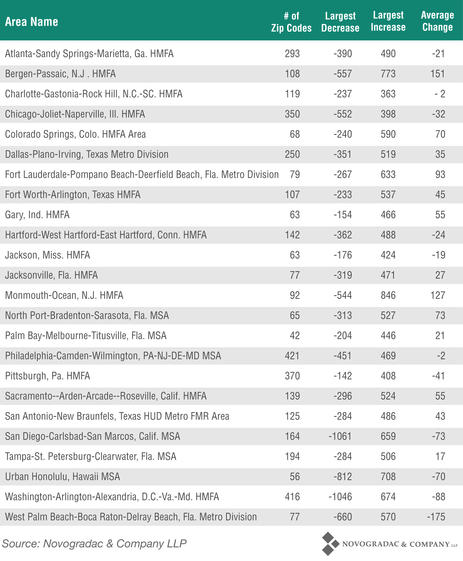 HUD made the SAFMR data available for all metropolitan zip codes in the country. The changes for the 24,766 zip codes are as follows:

We have worked Novogradac & Company’s geographic information system experts to map what the changes would look like in three of the new SAFMR areas.

As with the table above, the decreases and increases were calculated by comparing the 2017 area wide FMR to the hypothetical 2017 SAFMR. 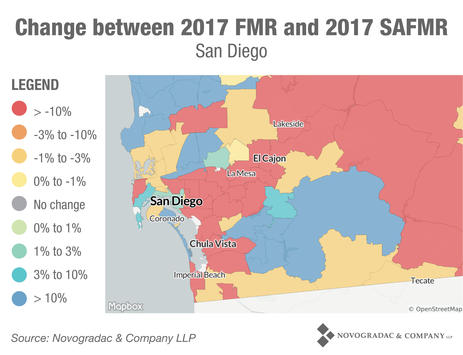 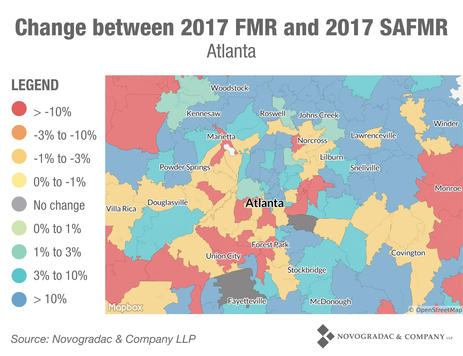 Northern Atlanta would have increases in the HCV payment standards.  The southern urban areas of Atlanta primarily have decreases.  The less densely populated zip codes to the south and east mostly have increases. 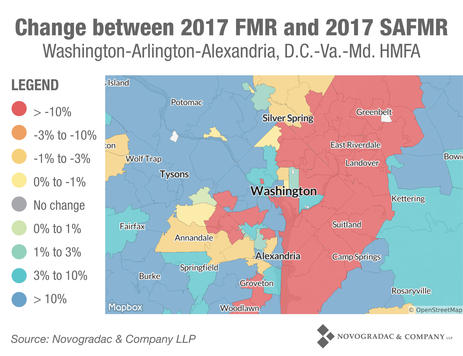 The areas above are provided as a sample of the changes; contact our GoVal team to inquire about Novogradac & Company’s ability to map a specific area for you.