The U.S. Department of Housing and Urban Development (HUD) proposed changes to its methodology for calculating fair market rents (FMR), which is used for a number of low-income housing programs. In a nutshell, HUD believes the revised methodology would result in FMR calculations based on more statistically sound data. Comments on the proposed changes are due by June 26.

Currently, as a starting point, HUD calculates a base rent by using available U.S. Census Bureau’s American Community Survey (ACS) data for gross rents of an area and tests it for statistical accuracy. If the data do not meet this requirement (which is discussed in more detail under the proposed changes section), HUD continues down its checklist of data options until its find a base rent that meets the statistical soundness tests.  Because of the availability of statistically sound data, the ACS data used are from three years prior to the FMR year.  For example, the calculation of the 2017 FMRs uses ACS data from 2014.

HUD then adjusts the base rent by a recent mover adjustment factor, which is based on ACS rent data for households that have moved in the 15 months prior to the ACS data used to determine the base rent. This allows HUD to make an upward adjuster if the average rents originally calculated are being weighed down by older rental agreements but new leases in the area are being signed with higher rents.  The recent mover adjustment is floored so that it can never decrease the FMR.

HUD then adjusts the base rent by the regional or local change in Consumer Price Index (CPI) for the one year period following the ACS base year (2014-2015 for FY 2017).  The base rent is then adjusted for the national change in CPI through the FMR year (2016 to 2017 for FY2017).  Finally, HUD compares the state minimum rent, which is equal to the median state nonmetropolitan unadjusted two-bedroom FMR, and the final FMR for the area is equal to the greater of the two amounts.

This summary shows the calculation for Abilene, Texas MSA from HUD’s website.

The proposed changes address HUD’s threshold for determining if the ACS data is statistically accurate, specifically two areas in the FMR calculation and one specific just to the calculation of Small Area FMRs.

This proposed change prevents calculations from sample sizes of less than 100 households, ensuring FMRs are not being determined by a handful of outliers. It also prevents the use of old data which could potentially misrepresent an area’s current rents.

This proposed change attempts to prevent FMRs being calculated based on data that do not truly represent the smaller area because of insufficient two-bedroom data. HUD is attempting to use more locally accurate data while still maintaining statistical accuracy.

This is another way HUD is attempting to keep data as local as possible to prevent larger areas from too heavily swaying smaller area rents. The impact of this change would be to keep FMRs from being artificially inflated or deflated based on a larger area which might not reflect current local circumstances.

The summary below shows the proposed calculation for the Abilene, Texas MSA from HUD’s website.

Decrease resulting from change in methodology: $29 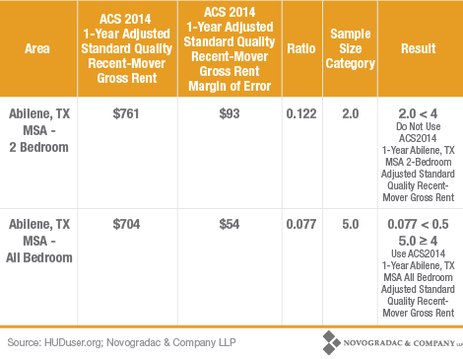 The recent mover adjustment is then calculated based on all bedroom sizes as opposed to just the two-bedroom rent.

This illustrates one of the motivations for the changes.  HUD believes small samples sizes are more likely to give inaccurate data.  The two-bedroom recent mover gross rent was $761 – however this data did not have a large enough sample size and therefore a more robust sample was used.  The larger sample size shows that rents did not increase as much as the smaller sample size indicated but were actually flat or slightly decreasing when taking into account all bedroom sizes.

There were no changes to the other variables in the calculation.

Unfortunately, HUD has only made available one year of proposed data, which is labeled as hypothetical FY 2017 FMR on its website, making it impossible to determine if the proposed changes will achieve the stated objectives of fewer fluctuations from year to year.  However, it is possible to quantify the changes for one year by comparing the hypothetical FMRs calculated under the new methodology compared to the current FMRs. The average change is minimal:

In addition, more than half of all areas have FMR changes of less than $5. These calculations are not weighted and do not consider the population of the area it serves. However, areas with little to no impact tend to be those with higher population by virtue of the fact that they already had statistically appropriate data to calculate FMR 80 percent of the population would have a $5 or less change in their FMR for 2017. As such, 65 percent of the population would see no change. There would be no significant impact for most people relying on these limits; however some areas would see drastic changes in FMRs.  Under the proposed changes, the largest FMR increase would be $849 and the largest FMR decrease would be $739.  The largest fluctuations tend to be in smaller areas that do not have statistically significant data. 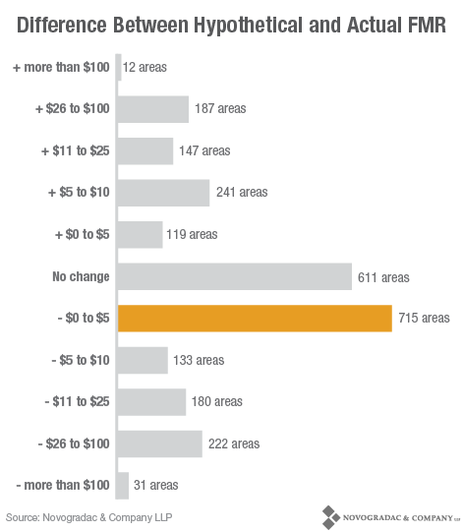 Supporters of the proposed FMR methodology changes believe this will accomplish two objectives 1) help lessen large fluctuations from year to as more robust data is being used and 2) they will better serve those in smaller communities by trying to the extent possible find reliable data for the smaller community as opposed to using larger areas that may not reflect what is really happening in the market.

It is important to note that these changes will likely impact small population areas as larger areas generally have statistically relevant data.  In addition these changes do not address the overall question of are FMRs accurate representations of the actual market rent, although it is important to note the FMRs are targeted to be 40% of the market rent.

May 4, 2021: What CDEs and Qualified Businesses Should Be Doing Now to Prepare for the Next NMTC Application Round
Posted on May 4, 2021
April 27, 2021: Maximizing the Benefit of State and Local Tax Incentives and Exclusions for Renewable Energy Properties
Posted on April 27, 2021
April 20: 2021: Understanding Provisions of the Affordable Housing Credit Improvement Act of 2021
Posted on April 20, 2021
END_OF_DOCUMENT_TOKEN_TO_BE_REPLACED