Sens. Charles Schumer, D-N.Y., Mark Pryor, D-Ark., and David Vitter, R-La., on July 22 introduced S. 2634, the National Disaster Tax Relief Act of 2014, which is an update to previously proposed S. 2233, also named the National Disaster Tax Relief Act. Much like its predecessor, the bundle of tax provisions in S. 2634 aims to alleviate the damage done by federal disasters declared in 2012 and 2013, as well as certain disasters in 2011. The bill has nine Democratic cosponsors and one Republican cosponsor. The House companion bill, H. 5082, has 17 Democratic cosponsors and 16 Republican cosponsors. Not only does the new bill have a broad, bipartisan coalition of support, it is more geographically diverse than the prior bill, with the addition of support from lawmakers in southern states.

The major update made in s. 2634 is the addition of federal disasters declared in 2014. The newly included disasters include various severe storms, straight-line winds, tornadoes, mudslides and/or flooding.

The legislation would increase new markets tax credit (NMTC) allocations by $500 million for 2013, 2014, 2015 and 2016. The proposal would boost historic rehabilitation tax credit (HTC) percentages to 26 percent for historic properties and 13 percent for non-historic properties for qualified rehabilitation expenditures paid or incurred in disaster areas between the date of the disaster and Dec. 31, 2015. Additionally, the National Disaster Tax Relief Act of 2014 would boost the affected states’ 2015 low-income housing tax credit (LIHTC) allocations by the greater of 50 percent of the state housing credit ceiling for 2013 or $8 multiplied by the population of the disaster-areas.

Novogradac & Company’s preliminary estimates reveal that the legislation would cover 26 states and the District of Columbia (two more states than the prior legislation), and supply approximately $696 million of LIHTC in 2015.

Based on the National Council of State Housing Agencies’ data regarding low-income housing units produced between 2010 and 2012, Novogradac & Company estimates that this additional LIHTC allocation could increase production of affordable units in the eligible disaster areas by almost 42,500 units in 2015. It is important to note that this data only covers disasters that have already occurred. If more disasters occur before January 1, 2015, the number of credits available and units produced would be larger.

While the legislation is unlikely to pass when Congress returns to session in September, it could be added to tax extender legislation after the midterm elections. The urgency for passing the bill would especially increase if, tragically, another major disaster were to strike. 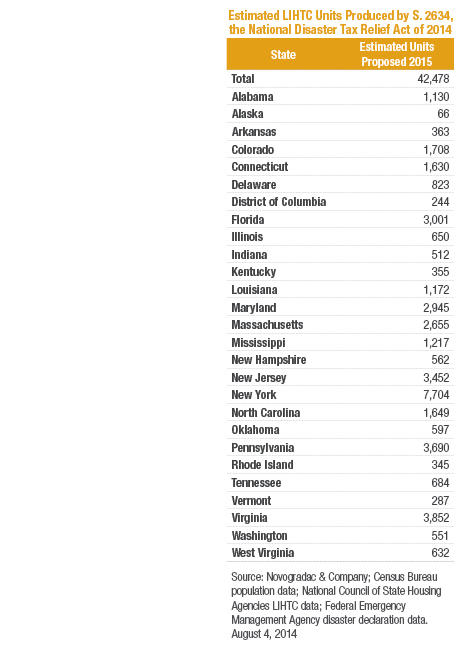