The NMTC is an important community and economic development tool that incentivizes needed private investment in low-income communities. Investments made possible by the NMTC are vital to the creation and preservation of small businesses in low-income communities. For every $1 invested by the federal government in the NMTC program, $8 of private investment has been generated.

QLICIs are made into small businesses in low-income communities as a part of the NMTC program. The types of businesses that have benefited from QLICIs include manufacturing, food, retail, housing, health, technology, energy, education and childcare. Though some states have seen higher levels of investments than others, every state, the District of Columbia and Puerto Rico have been home to at least one QLICI so far. While the vast majority of congressional districts had at least one QLICI, 28 districts across the country have not yet been home to one.

Total QLICIs in Each State

Since the NMTC was established, there has been nearly $56 billion in QLICIs across the country through FY 2019. The table below shows the total QLICI funding in each state, rounded to the nearest thousand.

Top 10 States with the Most QLICI Dollar Amounts

The chart below shows the 10 states with the highest QLICI dollar amounts from inception of the NMTC through FY 2019. 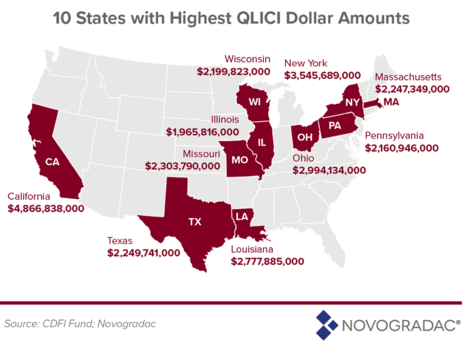 There are various reasons why some of these states have higher amounts of QLICIs. Many NMTC investors make investments into their respective Community Reinvestment Act (CRA) assessment areas. One of the reasons Louisiana has more than $2.7 billion in QLICIs is because under the Gulf Opportunity Zone Act of 2005, the CDFI Fund allocated an additional $1 billion in NMTC authority from 2005 to 2007 for QLICIs in the Hurricane Katrina GO Zone.

States and Territories that have Historically Received Fewer QLICI Dollars

QLICIs have been made in all 50 states, the District of Columbia, Puerto Rico, and Guam. However, activity has not been evenly distributed. The states the CDFI Fund has identified as having historically received fewer dollars of QLICIs in proportion to their statewide population residing in low-income communities (LICs) are shown in the graphic below. 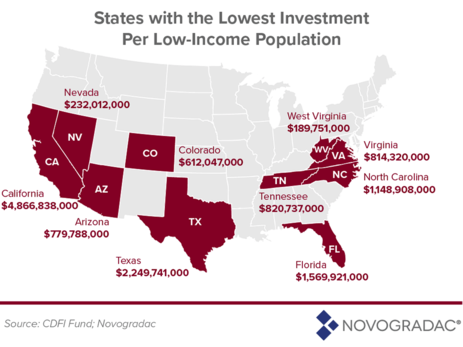 The states are identified by dividing the total dollars of QLICIs invested from FY 2003 through FY 2019 in each state by the population residing in low-income communities in that state. The CDFI Fund also considered Puerto Rico and the other island territories of American Samoa, Guam, Northern Mariana Islands and the U.S. Virgin Islands to have received lower levels of NMTC investment, as Puerto Rico and these four territories have only received minimal amounts of QLICIs. Of these territories, Puerto Rico, with $91,292,942 in QLICI dollars as of FY 2020, is the only one that has received any QLICIs.

Not all Congressional Districts Have Seen Investment 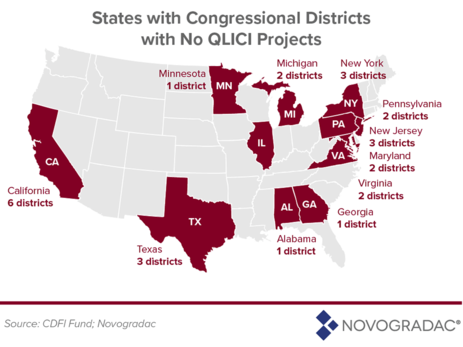 While the current update only includes data through FY 2019, we know the NMTC continues to provide much-needed investment. In FY 2020, there were 272 NMTC investments in 46 states and territories that created 45,090 jobs, including 28,322 permanent jobs and 16,768 construction jobs. Nearly a quarter of the financing in 2020 went to projects in non-metropolitan areas and 85% of projects receiving NMTC financing were in severely distressed communities. FY 2020’s NMTC investments continue to show how the credit is providing jobs and needed financing to low-income communities.

Since the NMTC’s inception, QLICIs have been providing needed investments to small businesses in low-income communities across the country. Though the NMTC was extended for five years at $5 billion in annual allocation authority by the Consolidated Appropriations Act of 2021, making the NMTC permanent would allow for these investments to continue to help small businesses in low-income communities. The New Markets Tax Credit Extension Act (H.R. 1321, S. 456) would make the NMTC a permanent part of the tax code, set an initial annual allocation amount of $5 billion, index that amount in future years by inflation and allow the NMTC to be taken against alternative minimum tax liability. It is uncertain whether this legislation could be incorporated in the pending reconciliation bill (it was included in an earlier version), or whether it could be added to year-end tax legislation that we expect Congress to begin to consider after the fate of the reconciliation bill is determined.

To learn more about the NMTC and the importance of making it permanent, be sure to attend Novogradac’s 2022 Spring New Markets Tax Credit Conference in Washington, D.C., in-person or online on June 9 and June 10, 2022. To participate more in the push for NMTC permanence and stay up to date on NMTC regulations, consider joining the NMTC Working Group.