In general, the FMR for an area is an amount that would be needed to pay the rent and utilities of a privately owned, decent and safe rental housing unit of a modest nature with suitable amenities. FMRs are used to determine payment standards for the Housing Choice Voucher program, initial renewal rents for some expiring project-based Section 8 contracts, rent ceilings in the HOME rental assistance program, and more. In addition, the FMRs influence income and rent limits for the Low-Income Housing Tax Credit (LIHTC) program, tax-exempt bond programs and other affordable housing programs. 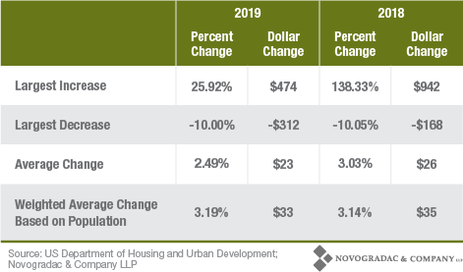 Of particular interest is the volatility in the year over year estimates. Of the 1,339 areas that had a decrease in 2019, 1046 of those areas had an increase in 2018 and only 236 areas had decrease for two years in a row (the remaining 57 areas with decrease in 2019 were flat in 2018). Even though only 236 had decreases two years in a row, 1,080 areas have a 2019 FMR that is less than their 2017 FMR. Local area surveys can impact the areas with decreases, as discussed below, but some areas had very large swings.

These are a few examples of areas that had large increase in 2018 and large decrease in 2019: 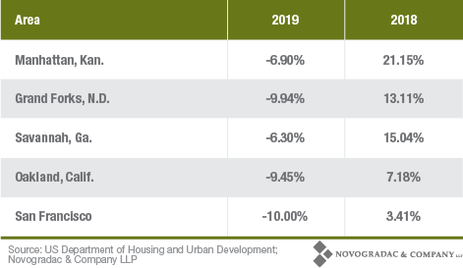 Continuing the trend of volatility, there were 805 areas that had a decrease in 2018 and an increase in 2019.

Below are a few examples of areas that had a large decrease in 2018 and large increase in 2019:

Below are the 10 largest increases for areas with populations greater than 100,000: 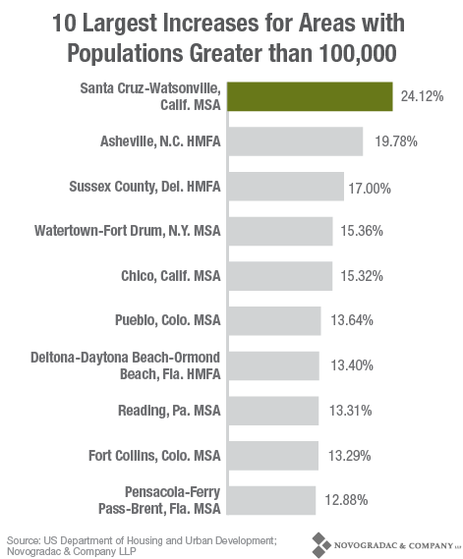 Below are the 10 largest decreases for areas with populations greater than 100,000:

A public housing authority (PHA) may request that the FMRs be re-evaluated if the PHA does not think the HUD published FMRs accurately reflect the rents in the area. For the 2018 FMRS, 13 areas initially notified HUD that they would like to have their limits re-evaluated. However, only eight of those areas submitted data to support the re-evaluation. It is unknown how many areas will request a re-evaluation for 2019 FMRs.

To see the impact of a local area survey, consider an area that had a local survey last year but does not have one this year: Oakland-Fremont, Calif. HMFA’s FMR calculated under a local survey for 2018 was $2,329. However, the local survey data that was used is now outdated and the FMR for 2019 using the ACS data is $2,109, which is a more than 9 percent decrease in FMRs.

Seattle-Bellevue, Wash. HMFA is an area that used a local survey for the first time in 2018. It is interesting to see the impact that the local survey had on the FMRs. The 2018 preliminary FMRs based on the ACS data was $1,527, however, after a local survey was commissioned the final 2018 FMRs were increased to $1,878.

When determining LIHTC income and rent limits, HUD applies a high housing cost adjustment that increases the income limits for areas where the cost of housing is abnormally high compared to the median income for the area. These areas are known as high housing cost areas and the adjustment is based on the 2-bedroom FMR as published by HUD.

After applying high housing cost adjustment to the 2019 FMR there are 75 areas that have a LIHTC income limit that is greater than the 2018 LIHTC limit with an average increase of 5.53 percent. The MTSP may be higher than the calculated amount if the AMI or other HUD adjustment for the county has increased to a level that is greater than the high housing cost adjustment. As reminder, estimates of the 2019 income and rent limits can be purchased from Novogradac.