What do LIHTC Investors Think about Potential Tax Reform?

Now that the administration and congressional leadership has released a “unified tax reform framework,” tax reform deliberations are heating up in Washington, D.C., which have the potential to significantly affect the low-income housing tax credit (LIHTC) market. The prospect of tax reform created volatility in pricing for several months after last November’s presidential election, but the market has begun to settle somewhat in recent months even as uncertainty remains regarding what Congress will actually consider and eventually accomplish. In the meantime, what LIHTC investors think about the prospects of tax reform in the long term and how various provisions could affect their investment decisions is a key topic for the affordable housing community to explore and understand.

In this context, Novogradac & Company worked with the Affordable Housing Investors Council to survey LIHTC investors and analyze how they are assessing and responding to proposed tax reform changes. The survey was conducted in the first half of 2017 and revealed important considerations and preferences.

Sixteen LIHTC investors responded to the survey. Together these respondents invested approximately $8.5 billion of the $16 billion in LIHTC equity committed in 2016 (including secondary market transactions). Novogradac asked what types of investment vehicles they used, how they fund LIHTC investments, and what factors are used in their investment evaluation decisions. Respondents were also asked to rank five different hypothetical investment options. 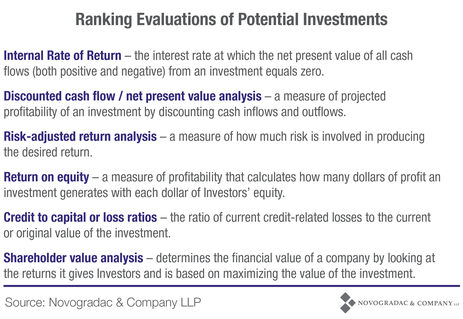 The five LIHTC investment scenarios investors were asked to rank were based on certain provisions in the House GOP Tax Reform Blueprint released in June 2016 as well as proposals to offset the effect of tax reform on LIHTC equity. Respondents ranked the tax reform scenarios in the following order: 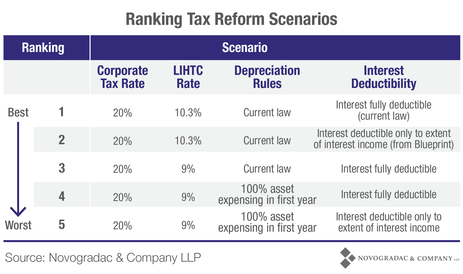 Regarding cash funding, respondents report preferring the true cash needs method: investors only contribute cash to meet the needs of the investment, rather than at a set schedule, which could lead to unused cash deposited in an escrow/reserve. True cash needs is the most efficient investment funding method to use when trying to maximize an IRR.  The modified cash needs method was the second most popular, which is similar to true cash needs but only requires investors to contribute cash until the required debt service coverage ratios or other requirements are met.

Fourteen of the 16 respondents use internal rate of return (IRR) to analyze their investment evaluation decisions. Four respondents ranked IRR as the most important valuation metric. 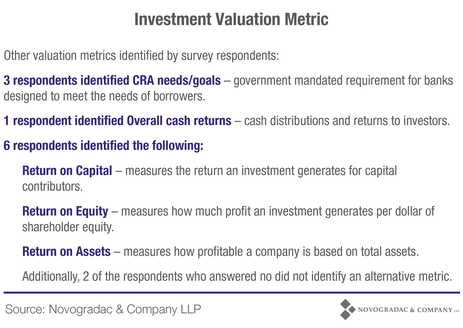 Investment evaluation metrics were ranked by investors from most to least important as:

At the time of the survey, most respondents were using a post-reform corporate tax rate that was greater than or equal to 20 percent but less than 30 percent in order to calculate the value of tax losses generated by LIHTC investments. The following chart shows the breakdown. 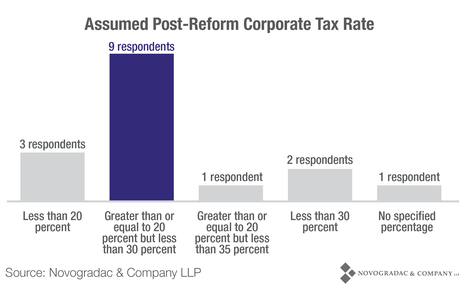 A provision in the House Blueprint would allow immediate expensing of fixed assets (including for LIHTC properties), rather than capitalize and depreciate the assets over their tax recovery period. The law currently allows depreciation of 27.5 years for residential rental real estate, 15 years for site improvements and 5 years for personal property. Despite the fact that it would be beneficial for IRR purposes, 13 of the 16 respondents stated that immediate expensing of fixed assets would not increase their LIHTC investment demand.

In terms of tax reform, respondents view an increased tax credit rate as being highly preferable to the acceleration of tax losses, such as the House Blueprint’s expensing provision. The investment scenario including all of the provisions in the House Blueprint was the least favorable.