What to Expect with the 2023 HUD Income Limits

Amid inflation and concerns about a potential recession in 2023, many people are anxious to for the release of the 2023 U.S. Department of Housing and Urban Development (HUD) income limits.

Here are some key questions and answers about the HUD 2023 income limits:

When will 2023 income limits be released?

HUD has a stated target of May 15 to release income limits for 2023. This is much later than in previous years, and later than HUD’s recent goal of releasing limits April 1 each year. As will be covered in more detail later, the delay is due to HUD using the 2021 American Community Survey (ACS) data, as opposed to the 2020 ACS data for the 2023 income limits. HUD’s statement notes that “the special tabulations of ACS 2021 data HUD needs for median family income calculations will not be available until early 2023.” This drastically reduces the amount of time HUD has to process information and compile income limits. As such, HUD has pushed back the scheduled release date by six weeks.

How has the methodology changed for 2023?

As has been covered in a series of blog posts in this space, the U.S. Census Bureau did not publish a 2020 one- year ACS due to data collection issues related to COVID. The 2020 one-year ACS would have typically been the starting point for the 2023 HUD income limits. In December 2022, HUD announced that in place of 2020 ACS data, HUD would use 2021 ACS data for 2023 income limits.

HUD uses a consumer price index (CPI) factor to trend the ACS data forward to the income limit year. HUD has not specifically stated how it will trend the ACS data for 2023, but it is anticipated that HUD will use the same methodology while using 2021 CPI as the baseline as opposed to 2020. The table below shows the tradition method and the anticipated calculation of median income for 2023.

As mentioned above, the 2023 income limits will use the 2021 ACS data. The 2021 ACS data was collected throughout 2021 and therefore the lingering impact of COVID-19 is present in the data. The change in one-year ACS data from 2019 (the last year available) to 2021 at the national level is 6.19% over the two-year period, or roughly 3% a year. This is compared to the almost 6% change seen in median income from the 2018 to 2019 ACS data. However, the impact of COVID is felt differently in different areas. While nationally the increase is fairly anemic at 3% a year, some areas are seeing large increases. This may be caused by transplants moving into the area due to COVID-19 or the pandemic not having an impact on wage earners at or around the median income level in 2021, among other reasons.

The main driver of increases for 2023 is the continued increase in CPI. Although the ACS data only increased by approximately 3% per year, the national median income for 2023 is estimated to increase at a higher rate after factoring the CPI trend factor.

It is not good news for all areas. Just more than 5% of the areas we can estimate will have a decrease from 2022 to 2023. This is much better news than feared, given the uncertainty of COVID-19 and the data issues, but still may cause issues for new and existing projects in these areas.

On the flip side, Novogradac estimates that more than 45% of the areas for which estimates can be made will have an increase of more than 7.5% from 2022 to 2023.

Below is a distribution of the anticipated change in the very low income (VLI) limit for the counties for which estimates can be made. 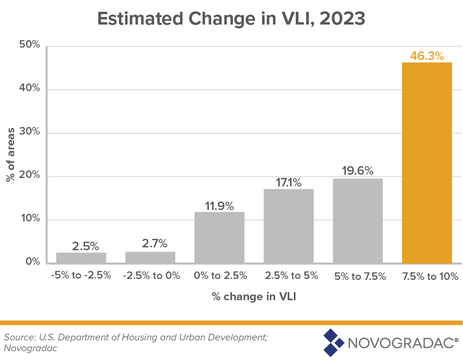 What do we need to know about national median income and the cap on increases?

As mentioned above, the national median income is expected to increase by around 4.75%. As noted in the HUD Income Limits Methodology, HUD caps the increases in VLI at “the greater of 105 percent of last year’s very low-income limit or to a level representing twice the rate of change in the national median family income estimate if that amount would be larger than five percent.” Traditionally HUD has calculated this cap at the change in national median income for the year. However, for 2022, HUD stated it was measuring the cap at the ACS level as follows, “for FY 2022 income limits, twice the increase in the national median family income as measured from the 2018 to 2019 ACS is approximately 11.89 percent, so the cap on increases is set at 11.89 percent.” A more detailed discussion of the cap for 2022 and its impact can be found in this blog post.

This raises the question as to what HUD will do for the 2023 cap. If it follows the pre-2022 methodology, the cap will be around 9.5%, based on the current national median income estimate. If HUD follows the 2022 methodology, it is unclear what the cap would be since we do not have a comparable 2020 ACS to look at for the change in ACS from 2020 to 2021.

For the table of income limits estimates above, Novogradac assumed that HUD would follow the pre-2021 cap. If the cap is lower, then all areas above the new cap would be capped at the new cap.

What is the outlook for 2024 income limits?

HUD likely will have two choices:

At first glance, it would seem odd to consider using the same ACS data two years in a row. However, if HUD did this, the ACS data would be trended an additional year using the CPI estimate for 2024–so there would be a change in median income, even though the same ACS is being used.  Something similar happened in 2011 and 2012. The 2011 income limits were released March 31, 2011. In 2011 HUD changed the release date to try to release the income limits Dec. 1 of each year. Therefore, the 2012 limits were released Dec. 1, 2011, just six months after the 2011 limits were released. Due to this short turnaround time, HUD used the same ACS data for 2011 and 2012 limits. From the 2012 HUD briefing material:

Although all areas were tended with the same CPI, due to the impact of the various adjustments HUD makes to AMI to arrive at VLI, not all areas’ VLI increased at the same percentage. Below is a map of the change in VLI from 2011 to 2012. 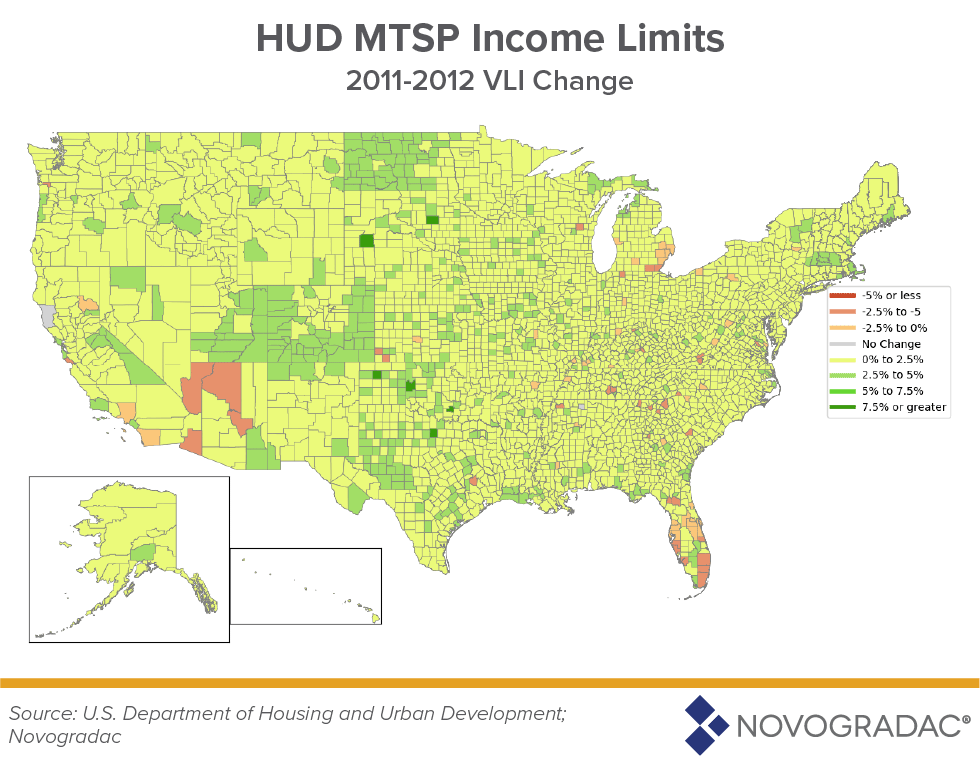 If HUD uses the same ACS data for 2024 as it did for 2023, it would probably result in a similar map, where the majority of the country increases at the same percentage, but some areas having larger or smaller increases due to other HUD adjustments such as the high housing cost adjustment and carryforward of capped increases and floored decreases from 2023.

Using the 2022 data poses its own set of problems. As mentioned in the HUD statement, HUD does not receive the data it needs until early in the year, which causes a very tight turnaround time for HUD. If HUD switched over to this method, it is likely that income limits would be permanently delayed until mid-April or later. In addition, HUD has other data sets that this would impact, it would make it so the income limits and fair market rents for the same year are using different ACS data sets.

Understanding LIHTC income and rent limit growth is vital to develop and manage successful affordable rental housing properties. Among other things, better understanding how income limits will change in future years can enable developers, investors and lenders to better underwrite LIHTC properties. With the Novogradac Rent and Income Estimator © you can understand how income and rent limits will change over the next one to two years. While data isn’t available for every area, Novogradac can provide estimates of area median income for 2023 and very low-income (VLI) for 2023 for many areas. Learn more about these estimates and for which areas they are available.