Senate
AP reports that Republicans retained control of the Senate with at least 51 and likely 54 seats in the next Congress, while there will likely be 44 Democrats and two Independents, Sens. Bernie Sanders of Vermont and Angus King of Maine, who generally vote with Democrats and were both reelected. The race in Mississippi between incumbent Republican Sen. Cindy Hyde-Smith against Democratic candidate Mike Espy will go to a Nov. 27 run-off election where Hyde-Smith is heavily favored. 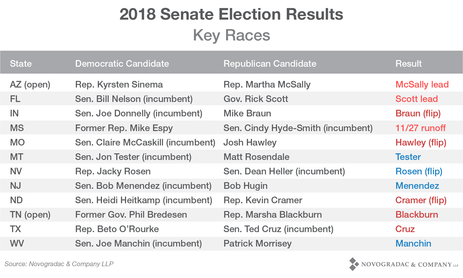 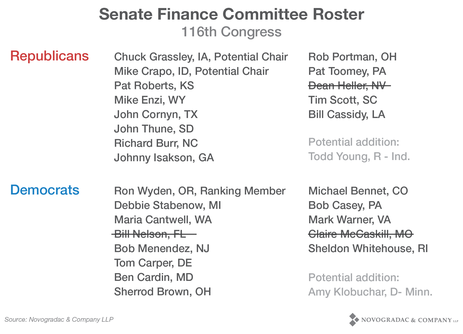 Republicans will likely need to fill two vacancies on the committee, although the committee size and ratio could change. The likely Republicans under consideration are Sens. Todd Young, R-Ind., Cory Gardner, R-Col., Steve Daines, R-Mt., and Deb Fischer, R-Neb.

House
All 435 seats in the House of Representatives were up for re-election. Currently, there are 236 Republicans, 193 Democrats, and seven vacancies–two of which were previously held by Democrats and the other five held by Republicans. Sixty-two representatives will not return to the House in the next Congress because they are retiring, ran for higher office, or lost their primary election, of whom 43 are Republicans and 19 are Democrats. 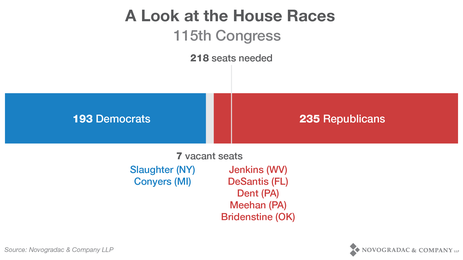 Most of the remaining 32 were re-elected; only Reps. Peter Roskam, R-Ill., Erik Paulsen, R-Minn., Carlos Curbelo, R-Fla., and Mike Bishop, R-Mich., failed to win reelection. Curbelo is the lead House Republican sponsor of the Affordable Housing Credit Improvement Act (AHCIA), and so a new champion will be to be identified. One candidate is Rep. Kenny Marchant, R-Texas. 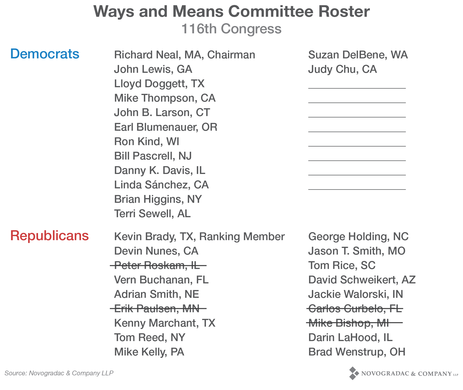 In his likely new role as chairman, Neal could decide to step aside his leadership role on AHCIA and the New Markets Tax Credit Extension Act. One candidate that might become the lead House Democratic AHCIA sponsor is Rep. Suzan DelBene of Washington.

Assuming there will continue to be 40 seats on the committee next year with 24 for the majority and 16 for the minority (although the committee size and party ratio are subject to renegotiation by House leadership), there are likely 12 seats to be filled on the committee, 10 Democrats and two Republicans. Among Democrats in the running for those seats are: Reps. Marcia Fudge D-Ohio; Dan Kildee, D-Mich.; Cedric Richmond, D-La.; and Hakeem Jeffries, D-N.Y. Among Republicans under consideration are Reps. Andy Barr, R-Ky.; Drew Ferguson, R-Ga., Lloyd Smucker or Brian Fitzpatrick, both R-Pa.; Mike Johnson, R-La.; Paul Mitchell, R-Mich.; and David Kustoff, R-Tenn.

House Financial Services and Appropriations Committee Leadership
Current Financial Services Committee Ranking Member Maxine Waters, D-Calif., is expected to become chairwoman, and current Housing and Insurance Subcommittee Ranking Member Emanuel Cleaver, D-Mo. is expected to become the Subcommittee chairman, although it is possible that the Subcommittee leadership could change. Current full committee Chairman Jeb Hensarling, R-Texas, is retiring, so there will be a race for the incoming ranking member. The leading candidate is Rep. Patrick McHenry, R-N.C., but he could be challenged by Reps. Frank Lucas, R-Okla.; Blaine Luetkemeyer, R-Mo.; Bill Huizenga, R-Mich.; or Sean Duffy, R-Wisc. 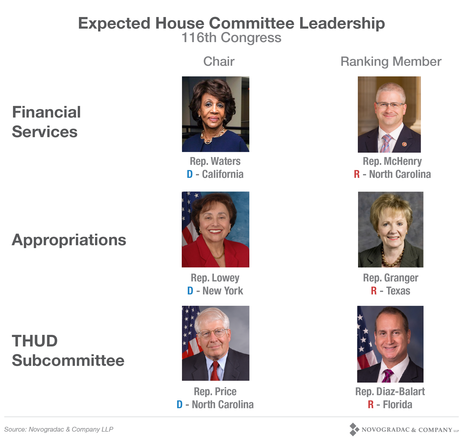 Lame Duck Legislative Outlook
When Congress returns on Nov. 13, among the must-do legislative agenda items is addressing seven out of the 12 fiscal year (FY) 2019 spending bills (including the ones funding HUD and Treasury) currently operating under a continuing resolution (CR), which expires on Dec. 7. With the House in Democratic control in January, it’s possible that Congress could extend the CR into January or February, but it is also possible that Congress will consider FY 2019 omnibus appropriations legislation.

One major obstacle to gaining agreement on omnibus appropriations is President Trump’s pledge to fund a wall on the U.S.-Mexico border, which congressional Democrats generally oppose. The president has threatened not to sign any more spending bills, especially the Homeland Security bill unless there is sufficient funding for a border wall. A breakdown in negotiations could lead to a partial government shutdown and poison the well on cooperation for other legislative matters. 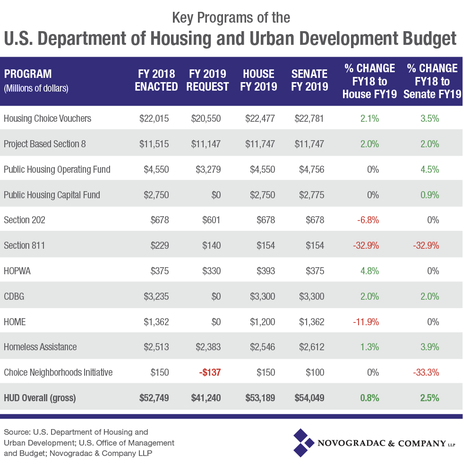 In addition to appropriations, there is a good chance that Congress will consider tax legislation in the lame duck session, which could serve as a legislative vehicle for low-income housing tax credit (LIHTC), new markets tax credit (NMTC), opportunity zone (OZ), historic rehabilitation tax credit (HTC) and renewable energy legislation.

The most obvious vehicle for tax legislation, the so-called “Tax Reform 2.0” legislation, the leading piece of which is making permanent the individual provisions of last year’s tax reform, has virtually no chance of passage in the Senate, so don’t expect that to be the vehicle. However, Tax Reform 2.0 retirement and saving proposals–could serve as a vehicle.

Better for attaching tax credit legislation would be a tax corrections bill to the tax reform legislation that passed last December. We’ve already seen the inclusion of a four-year, 12.5 percent increase in LIHTC allocations that were part of the FY 2018 omnibus spending bill passed in March to help correct the so-called “grain glitch.” Sen. Maria Cantwell, D-Wash., and others were able to get that provision added to the bill in exchange for their support for a bill that Republicans needed to pass.

Republicans want to correct several provisions in last year’s tax reform, most notably the “retail glitch” that mistakenly was drafted to force companies to write off the costs of certain property improvements over 39 years. It’s conceivable that Democrats will insist on something like a 4 percent LIHTC floor or a multiyear extension of the NMTC program in exchange for their votes.

A third legislative option is tax extenders, the traditional end-of-year tax vehicle in which legislators extend otherwise expired or expiring provisions. In 2014, the last midterm Congressional election, tax extenders included extensions of the 9 percent LIHTC floor, the NMTC and the renewable energy production tax credit. And at the following year, Congress made the 9 percent LIHTC floor permanent, gave a 5-year extensions of the NMTC and renewable energy tax credits in the PATH Act. Most Congresses at least address extenders and act on such legislation.

Some combination of the above three legislative vehicles could be combined with the FY 2019 omnibus bill before Congress adjourns for the year.

Initial 2019 Legislative Outlook
While Congress in divided control and President Trump still in office, legislative action will need to be bipartisan, and given the lack of bipartisan comity, it will be difficult for Congress to agree on major legislation. However, one issue where House Democrats and President Trump might agree could be infrastructure legislation, which in turn could authorize a federal infrastructure tax credit and serve as a legislative vehicle for LIHTC, NMTC, OZ, HTC and renewable energy legislation. In light of incoming Chairman Neal’s leadership on LIHTC and NMTC legislation over the years, there is a good chance that he will push for such legislation next year.

Congress will also need to address budget issues and the 12 FY 2020 spending bills. One immediate challenge is the return of strict budget caps and sequestration. Congress has enacted two-year budget deals that increase the defense and nondefense spending caps in recent years, and one can imagine that incoming House leadership will push hard for a new budget deal to enable the FY 2020 appropriations process to move forward. Even with a budget deal, Congress will have a challenge getting the FY 2020 spending bills signed by President Trump, who has instructed cabinet agencies to propose at least 5 percent spending cuts in the FY 2020 budget request.

More to Come
Look for the December issue of the Novogradac Journal of Tax Credits to read more about what these results mean for the LIHTC, NMTC, OZ, HTC and renewable energy communities. Elections are reminders of the importance of continued advocacy for affordable housing, community development (NMTC and OZ) and historic preservation programs.