What You Need to Know about 2017 HOME Rents

On June 2, the U.S. Department of Housing and Urban Development (HUD) published fiscal year (FY) 2017 HOME rent limits.  The limits are effective June 15 for all units financed by HOME funds.

This change in policy had a correction period that spanned three years (2013, 2014 and 2015) while rents in areas that had decreases under the new policy were reset to the new hold harmless benchmark.  After this correction period HOME rent limits will only decrease for changes in FMR and not for changes in income limits.  For more information about the implementation of the hold harmless policy, see “New HOME Program Rent Limits For 2013,” in the July 2013 Novogradac Journal of Tax Credits.

Analysis of FY 2017 HOME Rents
Although HOME rent limits are held harmless for changes in income limits, there were still many areas that had decrease in their 2017 rent limits due to decreases in FMR. 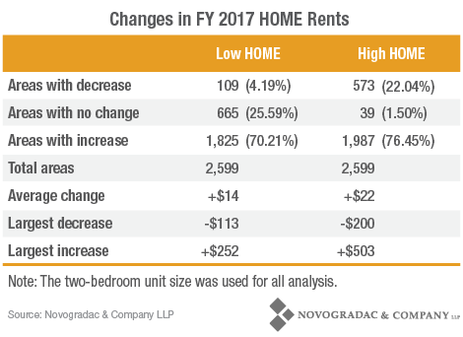 Impact to LIHTC Properties
Many LIHTC properties use HOME funds as a gap funding source.  Although a property’s LIHTC rents are held harmless, properties are not held harmless for decreases in HOME rents.  For units that are restricted by both HOME and LIHTC an owner would need to use the lesser of the two rents.   Decreasing HOME rents may cause issues for the property being able to pay debt service and operating expenses.

Conclusion
Owners of HOME funded properties should closely monitor the HOME limits and be aware that they may have to lower rents to tenants due to changes in the limits.  This may impact a property’s ability to pay debt service and cover operating expenses.