What You Need to Know About the Bond Conversion Proposal

The Obama administration’s fiscal year (FY) 2017 budget proposal is similar to its multiple predecessors in that it again seeks to allow states to convert a percentage of their private activity bond (PAB) volume cap into 9 percent low-income housing tax credit (LIHTC) allocations.  But unlike previous years, this year’s proposal is gaining some traction.

The administration’s FY 2017 proposal would allow up to 18 percent of a state’s unused private activity bonds, which total billions of dollars annually, to be used instead for LIHTC allocations. And while this sounds like universally good news for affordable housing advocates, there are other considerations.

Some jurisdictions, such as New York City, Washington and Utah, currently use all of their bond volume. These jurisdictions would be unable to take advantage of the change. In fact, bond cap utilization is generally increasing. This trend is a mixed blessing because it means both a reduced opportunity to take advantage of conversion but also a lower calculated fiscal impact.

Perhaps in part because of this reduced cost, some members of the House of Representatives are more interested in considering the proposal than they have been in the past.

The table below illustrates how the bond conversion proposals and bond use have changed over the years, and how those changes have affected the estimated cost of the proposal. The table compares the various versions of the administration’s bond conversion proposal from the FY 2013-2017 proposed budgets with the maximum PAB cap eligible to be converted into 9 percent LIHTC allocations, the resulting maximum 9 percent LIHTC allocations, the Joint Committee on Taxation (JCT) revenue score for each version, and the calendar year amounts of PAB cap abandoned, as reported by the Council of Development Finance Agencies (CDFA). The 2015 PAB report from CDFA is expected in late July/early August 2016. 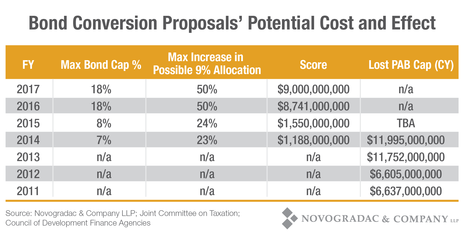 One possible way the proposal could advance is if it were included in legislation that Sen. Sherrod Brown, D-Ohio may introduce with a Republican cosponsor later this year. Brown has circulated draft legislation among his Senate colleagues and the LIHTC community.

May 4, 2021: What CDEs and Qualified Businesses Should Be Doing Now to Prepare for the Next NMTC Application Round
Posted on May 4, 2021
April 27, 2021: Maximizing the Benefit of State and Local Tax Incentives and Exclusions for Renewable Energy Properties
Posted on April 27, 2021
April 20: 2021: Understanding Provisions of the Affordable Housing Credit Improvement Act of 2021
Posted on April 20, 2021
END_OF_DOCUMENT_TOKEN_TO_BE_REPLACED