What You Need to Know About the FY 2017 Income Limits

As 2016 winds to an end, we are quickly approaching my favorite time of year – the day the U.S. Department of Housing and Urban Development (HUD) releases the new income limits. I am sure we all remember the year HUD affirmed its love back to us and released the limits on Valentine’s Day.

Around this time of year I start to get emails and phone calls wondering when the income limits will come out and if I have any inside information about potential increases. The following answers address a few of the most frequently asked questions.

When will the income limits be released?

The income limits could be released as early as February but will likely be released again in mid-to late-March.

As some may remember, in 2011 HUD committed to releasing the income limits on December 1 every year. However, the definition of extremely low-income (ELI) was changed by the 2014 Consolidated Appropriations Act to incorporate the Department of Health and Human Services (HHS) poverty guidelines into the extremely low income limits (30 percent limits). Historically the HHS poverty guidelines have not been released until late January (they were released on January 25 in 2016). After the release of the HHS data, HUD will need time to incorporate the data into their calculation. Therefore, HUD is no longer able to release the limits in December because they have to wait for data from HHS.

Although the poverty adjustment only affects the ELI income limits and does not impact very low-income (VLI) or low-income housing tax credits (LIHTCs), HUD has stated multiple times that they will continue to release the Section 8 and Multifamily Tax Subsidy Project (MTSP) (the income limits used for LIHTC and tax-exempt bond developments) income limits at the same time.

Do you have any predictions of the future?

We do have some preliminary information that makes us think that on a national level both 2017 and 2018 should see strong income limit growth. Novogradac has been engaged by various clients to estimate the 2017 and 2018 income limits and most of the areas that we estimated are showing robust income growth. If you would like Novogradac & Company to run the calculation for an area you are interested in, please let us know.

Change in National Median Income
Novogradac & Company currently estimates that the national median income will increase by around 3.5 percent for 2017 and more than 5 percent for 2018. While the increase for each individual area will vary, and as always there will likely be some areas that see decreases, it appears that 2017 and 2018 will see a general up-tick in income limits. These projected increases are in contrast to the national median income decrease we saw from 2015 to 2016.

The ACS data and the historical CPI that HUD will use for the 2017 and 2018 area median income have been released. However, the projection of future CPI is not yet available.

Calculating High Housing Cost Areas
When determining MTSP, HUD uses an upward adjustment known as high housing cost that is based on the fair market rent (FMR) for areas where the cost of housing is abnormally high compared to the median income for the area. The FMR for 2017 has been published and therefore we can calculate the 2017 MTSP for areas that fall under the definition of high housing cost areas. Those areas will have an MSTP at least equal to the amount in the calculation. The MTSP may be higher than the calculated amount if the AMI or other HUD adjustment for the county has increased to a level that is greater than the high housing cost adjustment. 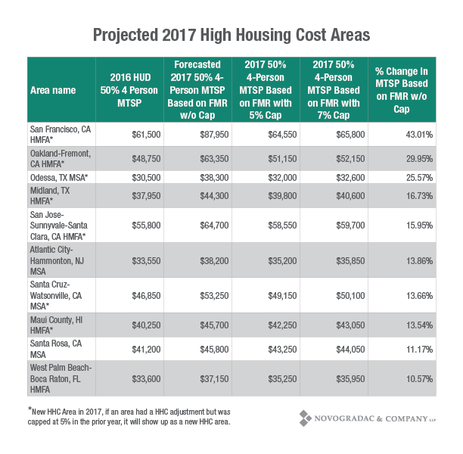 Note, for the chart Novogradac ran the calculation three different ways. They are as follows:

5 percent cap – showing what the limits would be if the change in national median income is less than 2.5 percent and HUD applies a 5 percent cap.

7 percent Cap – showing what the limits would be if the national median income increases by the predicted 3.5 percent.