Like little children on the eve of their birthday, from tenant to landlord to investor, people around the country are anxiously awaiting the 2019 Department of Housing and Urban Development (HUD) income limits (or maybe it is just the few of us who have chosen to read this blog post). Either way as the calendar turns to a new year, our thoughts turn to HUD income limits.

As discussed in previous years, HUD must incorporate the Department of Health and Human Services (HHS) poverty guidelines into their extremely low income (ELI) limits. Historically the poverty guidelines have been published in the last week of January, however, they were published on January 11 for 2019. (Note, although the guidelines have been published on HHS’ website, the site also features this note: “Federal Register notice forthcoming. Publication is delayed due to temporary closure of federal offices.”)

HUD utilizes the American Community Survey (ACS) when calculating Area Median Income (AMI). The 2019 income limits will be based on the 2016 ACS data. Both the 2016 and 2017 ACS data has been released to the public which allows Novogradac & Company to do some fairly robust estimates of AMI for 2019 and 2020. During 2018 Novogradac launched an income limit estimator tool. More information is available in this blog post about how the estimates are generated.

Novogradac estimates that 2019 and 2020 will have very robust growth. On a macro level, more than 15 percent of the areas for which we can make estimates will have an increase of greater than 7.5 percent in each of the next two years! However, on the other side of the coin more than 10 percent of the areas will have a decrease. This is why it is so important to understand what is happening with a specific area as opposed to just using historical averages of some other data point. The graph below plots the growth rate and percentage or estimated areas that fall within that growth rate. For example, 5 percent of all areas estimated for 2019 will have a decrease in income limits between -2.5 and -5 percent. 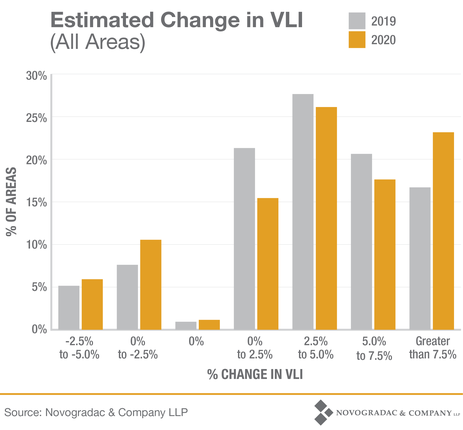 When determining MTSP, HUD applies a high housing cost adjustment that increases the income limits for areas where the cost of housing is abnormally high compared to the median income for the area. These areas are known as high housing cost areas and the adjustment is based on the 2-bedroom fair market rent (FMR) as published by HUD. The FMR for 2019 has been published and therefore we can calculate the 2019 MTSP for areas that fall under the definition of high housing cost areas. Those areas will have an MSTP at least equal to the amount in the calculation. There may be other adjustments that result in the income limits being even higher than the amount calculated by the change in FMR, however, after taking into account the cap on increases discussed above, the income limit would never be lower than the amount calculated by the FMR.

These 72 areas include areas with large populations such as the following:

Please visit the Novogradac Rent and Income Limit Estimator © page if you would like to purchase an income limit estimate or more detail on these areas.

Understanding LIHTC income and rent limit growth is vital to develop and manage successful affordable rental housing properties. Among other things, better understanding how income limits will change in future years can enable developers, investors and lenders to better underwrite LIHTC properties. With the Novogradac Rent and Income Estimator © you can understand how income and rent limits will change over the next one to two years. While data isn’t available for every area, Novogradac & Company can provide estimates of area median income (AMI) for 2019 and 2020 and very low income (VLI) for 2019 and 2020 for many areas. Learn more about these estimates and for which areas they are available.