The start of a new year brings back a familiar topic: the countdown for the release of the 2022 U.S. Department of Housing and Urban Development (HUD) income limits.

Here are some key questions and answers about the income limits to be prepared for 2022.

In early 2018, HUD stated that its target release date for income limits would be April 1 for each year. Outside of 2019 when the government shutdown delayed the release, HUD has achieved this target every year since 2018. This year, April 1 is a Friday, so we are hopeful that income limits will be released on April 1 once again.

As discussed previously, HUD must incorporate the Department of Health and Human Services (HHS) poverty guidelines into their extremely low income (ELI) limit. Those are typically released in the third week of January.

HUD uses the American Community Survey (ACS) when calculating area median income (AMI). The 2022 income limits will be based on the 2019 ACS data. This is important as the 2019 ACS was collected prior to the COVID-19 pandemic and, therefore, is unimpacted by the pandemic. The 2019 ACS data has been released to the public, which allows Novogradac to do some fairly robust estimates of area median income for 2022. Novogradac launched an income limit estimator tool in 2018. More information about how the estimates are generated is available in this blog post.

Novogradac estimates that 2022 will see income limits trending up by a large amount. We are currently estimating that the national median income will increase by just under 8%. The income increases may seem out of place due to the ongoing pandemic, but the increase is impacted by two things, first, as mentioned earlier, the income limits are based 2019 ACS data, and the limits are trended from 2019 to 2022 using a Consumer Price Index (CPI) trend factor. Since CPI is increasing at a rapid pace, this serves as a tailwind to propel limits even higher. CPI will be updated one more time before HUD publishes their limits, this means our estimates are likely lower than what HUD will publish once they incorporate the next CPI release.

Overall, we are estimating that more than 92% of the areas that we can estimate will see an increase in their income limits for 2022. The increases will be substantial with more than 50% of the areas having an increase of more than 5%. In fact, more than 17% of areas will see an increase in income and rent limits over 10%. HUD has a cap on increases equal to two times the change in national median income. Therefore, we are estimating that the cap for 2022 will be just under 16%. We will update the cap and estimates when the Congressional Budget Office releases their next CPI update, which is anticipated to occur later this month. At this time, we will also update our area specific estimates that are available for purchase as well.

The graph below plots the growth rate and percentage or estimated areas that fall within that growth rate. 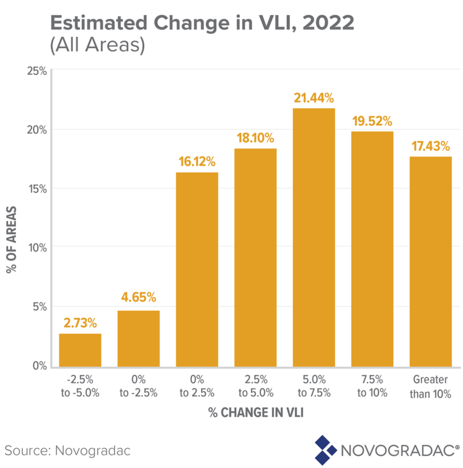 When determining MTSP, HUD applies a high housing cost adjustment that increases the income limits for areas where the cost of housing is abnormally high compared to the median income for the area. These areas are known as high housing cost areas and the adjustment is based on the two-bedroom fair market rent (FMR) as published by HUD. The FMR for 2021 has been published and therefore Novogradac can calculate the 2021 MTSP for areas that fall under the definition of high housing cost areas. Those areas will have an MSTP at least equal to the amount in the calculation. There may be other adjustments that result in the income limits being even higher than the amount calculated by the change in FMR; however, after taking into account the cap on increases discussed above, the income limit would never be lower than the amount calculated by the FMR.

These 60 areas include areas with large populations such as the following:

Please visit the Novogradac Rent and Income Limit Estimator © page to purchase an income limit estimate or more detail on these areas.

As has been covered in a series of blog posts, the U.S. Census Bureau announced that due to data collection issues, it will not issue a 2020 ACS. The 2020 ACS is typically used to estimate the 2023 HUD Income Limits. It is unknown at this point how HUD will respond to the lack of data when publishing the 2023 income limits. Novogradac has created the Income Limits Working Group to analyze the issue and discuss potential solutions. If you are interested in joining the working group, please complete this form.

Understanding LIHTC income and rent limit growth is vital to develop and manage successful affordable rental housing properties. Among other things, better understanding how income limits will change in future years can enable developers, investors and lenders to better underwrite LIHTC properties. With the Novogradac Rent and Income Estimator © you can understand how income and rent limits will change over the next one to two years. While data isn’t available for every area, Novogradac can provide estimates of area median income for 2022 and very low-income (VLI) for 2022 for many areas. Learn more about these estimates and for which areas they are available.

Understanding the Final Adoption of the Available Unit Rule with the LIHTC Average Income Test
Considerations for PHAs Thinking about Partnering with Developer on RAD Transaction
The Foglia Residences at The Chicago Lighthouse Twins LIHTCs to Help Blind, Visually Impaired in Chicago
END_OF_DOCUMENT_TOKEN_TO_BE_REPLACED