What you Need to Know About Income Limits

Understanding HUD’s income limits can be a difficult endeavor. Terms like high housing cost or and state non-metro median adjustment can turn off even the most ambitious user. However, this primer will help better explain how HUD determines income limits.

AMI vs VLI
Before discussing how HUD determines income limits it’s important to first understand the difference between area median income (AMI) and the 50 percent median income limits known as the very low income (VLI) limits. AMI is HUD’s calculation of area median income based on the American Community Survey (ACS) data and is the starting point for VLI. However, AMI is just the starting point for determining VLI, in fact in around than 60 percent areas VLI is not equal to 50 percent of AMI. This is due to various adjustments that HUD applies to AMI when calculating VLI. When determining tax credit income and rent limits project are instructed to use VLI and not AMI.

Calculation of AMI
When HUD calculates AMI it begins with historical ACS data and uses the change in consumer price index (CPI) to adjust the historical ACS data to arrive at AMI. When calculating the change in CPI HUD uses the national annual CPI from the applicable ACS year and a Congressional Budget’s Office estimate of the December CPI for the income limits effective year. For example, the calculation for the 2017 income limit was as follows: 2014 ACS*(CBO estimate of the December 2017 CPI/2018 Annual CPI)=2017 income limits.

HUD then rounds the calculation of AMI to the nearest $100.

The CPI can also play a big role in the income limit growth. The chart below illustrates how the CPI adjustment would have impacted an area where the ACS data stayed steady.

The following graphic shows how the national CPI change impacts an area that has had strong ACS growth.

In addition, HUD always uses ACS data that is 3 years old. This results in changes in local demographics or employment factors taking 3 years to materialize in AMI. For example, if incomes in an area saw a large increase in 2016 the effects of this increase would not be felt until the 2019 income limits.

See below for a how HUD calculated the AMI for the New Orleans-Metairie, La. HMFA:

Calculation of VLI
When HUD calculated VLI it begins with the AMI estimate and applies five adjustments. The adjustments and their frequency for 2017 are as follows: 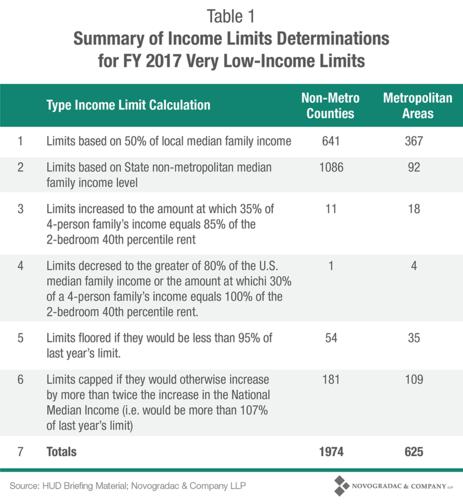 State Non-Metro Median Income Adjustment
AMI income adjusted up so that no area in a state has a VLI that is less than the non-metropolitan median income of that state. This adjustment affects over 40 percent of the areas in each of the last two years. However, the adjustment mainly applies to smaller areas and only impacted 12.8 percent of the population in 2017. However, it is not always only non-metropolitan areas that qualify for this. For example, Las Vegas, Nevada’s VLI was adjusted by the state non-metro median income area in 2017.

High Housing Cost Adjustment
High housing cost areas are areas where housing costs are high compared to income limits. HUD adjusts the VLI up in these areas so that a higher percentage of the population can qualify for Section 8 assistance. The adjustment is based off of the HUD published fair market rents (FMR) for the area based on the following calculation: FMR*.85/.35*12. Although the high housing cost adjustment only affected 29 areas (approximately 1 percent of all areas) it impacted almost 10 percent of the population since the impacted areas tend to be areas with large populations such as Los Angeles.

Income Limit Floors
To help avoid large swings in VLI from year to year HUD does not allow income limits to decrease by more than 5 percent from one year to the next. 2017 was a strong year for income limits so only 3.4 percent of areas were subject to the floor, however, in 2016 11.8 percent of areas were floored. (Please see the next section for more discussion on the ongoing impact of caps and floors.)

Income Limit Caps
Similar to above HUD provides a cap on how much VLI can change from one year to the next. However, as the floor is always 5 percent the cap is the greater of 5 percent or two times the change in national median income. Therefore, the cap for 2017 was 7 percent since the change in national median income was 3.5 percent. As stated above 2017 was a robust year for income limits and therefore 11.2 percent of areas were capped as compared to 6.7 percent of areas for 2016. (See the next section for more discussion on the ongoing impact of caps and floors.)

After applying all of the adjustments to an area HUD will publish the VLI. As noted more than 60 percent of all areas were subject to one of the above adjustments in 2017.

Ongoing Impact of Caps and Floors
Caps and floors can have an impact on VLI for multiple years so it is important to understand if an area is capped or floored and the magnitude of the cap or floor. If an area was floored in a year, it means there is a pent up decrease that will have to be overcome before the area will see an increase. For example, in the un-floored VLI would have decreased by 10 percent but it was floored by 5 percent, the income limit would need to increase by 5 percent to avoid a decrease in income limits for following year. Please see the following example:

As seen in the example above although the underlying income limit increased by 4 percent from 2016 to 2017 the published income limit for 2017 still decreased by 5 percent due to the pent up decrease from prior years.

Conversely, if the increase for an area was capped in the current year it means it is more likely that it will have an increase in future years.

(Note: the cap for 2017 was 7 percent since the national median income increased by 3.5 percent.)

The example illustrates that even though the underlying data for 2017 had a decrease, the published limit still increased by 7 percent due to the previously capped increases.

ELI is calculated by first determining a preliminary ELI equal to 60 percent of VLI. The preliminary ELI is adjusted up if it is less than the Health and Human Service’s poverty level. However, in no case can the ELI be greater than VLI. Therefore, if the VLI is less than the poverty level the ELI will be capped at VLI. There are 424 areas that have their 4 person VLI equal to the 4 person ELI.