What’s Next for Opportunity Zones?

The closing months of 2020 will certainly be eventful, and opportunities zones (OZs) stakeholders will be watching to see how the incentive may be affected. There will be a flurry of government activity in the coming days and week – including ongoing negotiations around the next phase of COVID-19-related relief, efforts to seat a new Supreme Court justice, possible year-end tax legislation and another continuing resolution to fund the government – the most consequential of which are the upcoming elections. The presidential election, Senate and House races, and what follows could usher in a great deal of change for the affordable housing and community development sectors.

A change in administrations could, and most likely will, mean that Democrats will have an opportunity to address the issues they see in the current administration’s signature piece of legislation, commonly referred to as the Tax Cuts and Jobs Act (TCJA) of 2017. Among the many proposals included in Democratic presidential nominee Joe Biden’s plans for the country, are a number of tax changes that take aim at provisions of the 2017 tax legislation, including an increase in the maximum corporate tax rate, an increase in the top ordinary income tax rate and taxing capital gains as ordinary income for certain taxpayers. These proposals would likely advance only if the Democrats take control of the Senate, and even then, their enactment would require the votes of moderate Democrats. Also enacted under the TCJA, the OZ incentive, which has been touted by the Trump administration as a major accomplishment focused on providing private capital for underserved low-income communities, has received a good deal of attention, both positive and critical. The results of the presidential election will likely dictate the scope of changes made to the OZ incentive going into 2021.

Before looking forward, it helps to reflect on what has led to this point. Since the OZ incentive was first introduced in 2016, there have been a number of legislative and regulatory actions worth noting. The list below is not intended to be all-encompassing but does list the major milestones. 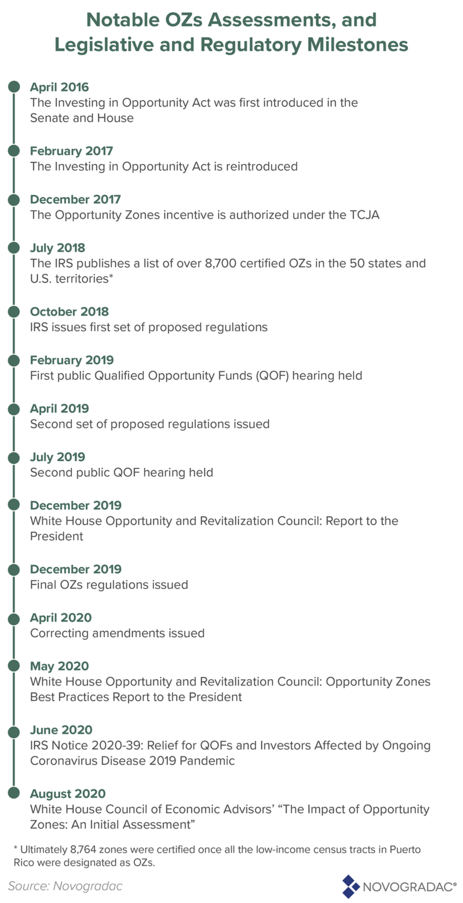 In addition to the legislation and guidance noted above, numerous other bills have been introduced in the past three years proposing to, on the one hand, expand and enhance the OZ incentive, and on the other, eliminate or limit the reach of the incentive. Landing somewhere in the middle are measures to require more transparency in terms of where and what types of investments are being made, and reporting on how low-income residents and communities are benefitting from these OZs investments. Proposed legislation of note in this last category are the IMPACT Act (S. 2994), the Opportunity Zone Accountability and Transparency Act (H.R. 5011), and the Opportunity Zone Reporting and Reform Act (S. 2787), all of which will be discussed during the upcoming 2020 Opportunity Zones Virtual Fall Conference.

There have of course been other notable time-sensitive acts and extensions in the past three years. For instance, for investors, Dec. 31, 2019 was the last day to invest gains and be able to receive the full 15 percent step-up in basis after holding their investment for seven years. With the COVID-19 pandemic and the ensuing economic downturn, those with due dates to be met between April 1, 2020 and Dec. 31, 2020 saw those deadlines extended to Dec. 31, 2020 – the Department of Treasury provided relief for QOFs and investors, by addressing certain failures by a QOF to meet the 90-percent investment standard and postponing deadlines for satisfying certain other requirements, including the 180-day investment period.

While all eyes are focused on the election and its results, which may not be known for quite some time after the election, the government is still going about its daily business. During the lame duck session, it is expected that efforts to expand the OZ incentive and establish reporting requirements will continue. Sen. Tim Scott, S.C.-R, who as an original sponsor of the Investing in Opportunities Act has been championing the OZs since 2016, plans to continue working on expanding the incentive as the year comes to a close. Scott has noted that this work will require bipartisan support, which could mean including provisions important to Democrats – this may include reporting requirements, as noted above, and changing the requirements for what would qualify as an OZ.

As for what 2021 may hold, a potential Biden administration, and the possibility of a Democratic sweep – the Democratic Party taking control of the House and Senate, and winning the presidency – could mean major changes for the OZ incentive. Biden, as part of his Build Back Better platform, has made known his desire to retain but reform the OZ incentive. These possibilities are examined in the report, “Blue Wave Effects: What a Democratic Sweep Could Mean for Affordable Housing, Community Development, Renewable Energy and Historic Preservation” and this Notes from Novogradac post that touches on some of the major implications for tax policy in general and affordable housing, community development, renewable energy, historic preservation tax incentives and OZs in particular.

Changes under a Biden administration could include both legislative and regulatory changes to the OZ incentive such as: the implementation of reporting requirements and other provisions to increase transparency and prevent abuse; addressing issues raised around contiguous census tracks; reforming the QOF certification process (this could mean a prominent role for the Community Development Financial Institution (CDFI) Fund); and measures aimed at facilitating increased local engagement and inclusiveness of benefits to low-income community residents.

Legislatively, a second term for President Trump would likely leave OZs fundamentally unchanged, though he has expressed a desire to expand the incentive. The administration has not put out specifics as to what expansion would entail, though proponents of the incentive have proposed increasing the number of OZs.

The results of the election may not be known on, or in the days immediately following, November 3. Novogradac will be hosting a 2020 election results webinar on November 19 where what we know, and don’t yet know, about the election and how community development tax incentives could be impacted will be outlined and discussed.