As pandemic-related relief winds down, Americans’ who were able to buy homes continue to fare well as their equity increases, while lower income renters continue to struggle to cover housing costs, due to inflation and increased interest rates, according to the Harvard Joint Center for Housing Studies’ (JCHS’) annual assessment of the housing market, State of the Nation’s Housing 2022, published this month.

This release follows the biennial renter-focused report from JCHS, covered in a January Notes from Novogradac post. JCHS reported record rent and home price increases in 2021. Meanwhile, rising inflation, continued housing supply constraints and supply chain issues exacerbated the nation’s longstanding housing issues. Despite these challenges, the attention being paid by lawmakers to the country’s housing issues, as evidenced by the Housing Supply Action Plan released by the Biden administration, provides reason for some optimism. This plan, which strives to eliminate the housing supply gap in five years, would enhance the low-income housing tax credit (LIHTC), among other measures.

A major concern during the height of the COVID-19 pandemic was the projected rise in households being unable to pay their rents and mortgages because of pandemic-related job loss. To prevent mass evictions and foreclosures, federal, state and local governments put in place moratoriums. Additionally, part of the CARES (Coronavirus Aid, Relief, and Economic Security) Act and American Rescue Plan Act COVID-19 relief included more than $46 billion in Emergency Rental Assistance (ERA) to be used to keep families that lost income during the pandemic in their homes. As of March 2022, 5.3 million payments have been issued that have covered current and back rents, plus utility expenses. Per the National Low Income Housing Coalition, approximately $28 billion in ERA funds have been spent.

The relief provided effectively kept families in their homes, but with the ending of these moratoriums evictions began to rise–JCHS reports eviction filings reached 61,300 in March, just 2.5% below the monthly average for the same month in 2012-2016. Evictions in more than half of the cities tracked were back to historical levels. 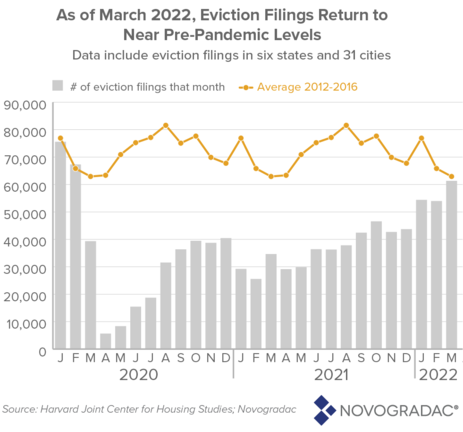 Supply and demand issues in conjunction with evictions are not the only concerns of renters. Record rent increases reported by JCHS in both multifamily and single-family rentals, coupled with record levels of inflation makes it that much harder for lower income households to find homes they can afford. 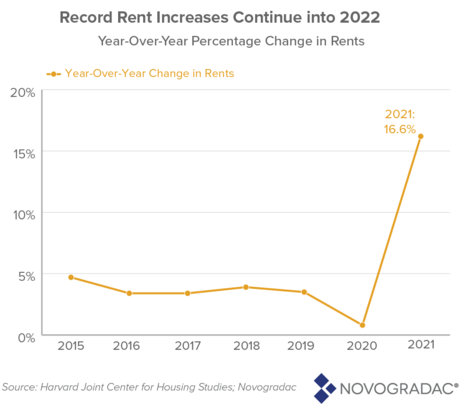 For professionally managed properties, apartment rents had increased 11.6% year-over-year in early 2022, while rents for single-family homes increased 12.4% year-over-year, both record increases, per JCHS. Earlier this year, the NLIHC’s annual report, The GAP: A Shortage of Affordable Homes, found that no state has an adequate supply of affordable rental housing for its lowest income renters, with a nationwide shortage of approximately 7 million homes. 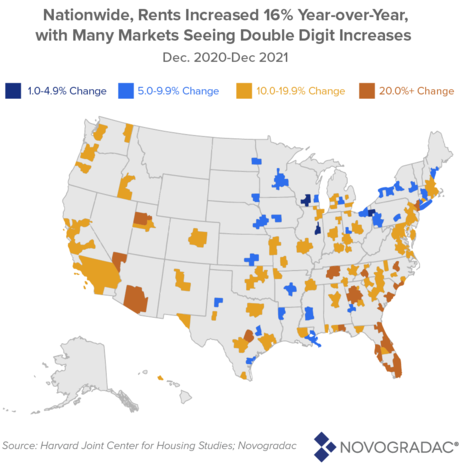 Economic hardships caused by the pandemic are still being felt as evidenced by the ongoing Household Pulse Survey results, released by the U.S. Census Bureau, that measure renter households’ ability to pay their housing costs. The difference seen in statistics on recent job loss and income between white households and Black, Indigenous and people of color (BIPOC) households are reflected in the inability of the latter to cover housing costs. The Household Pulse Survey shows nearly a quarter of African American renter households, 18% of Hispanic and 18% Asian renter households reported falling behind in their rent earlier this year, compared to less than 10% white of renters.

Further evidence of housing insecurity is seen in the “first substantial” increase in housing cost burdens on a national level seen in the last 10 years, according to JCHS reporting. In 2020, 30% of all households were cost burdened, paying 30% or more of their income towards housing costs, and those considered severely cost burdened, paying more than 50% of their income towards housing costs, stood at 14%. As shown in the graphic below, renters, low-income households and BIPOC households struggled more than white households when it came to paying housing costs. At the same time, the JCHS noted that these households had to endure high inflation on necessities such as energy (a 16% year-over-year increase in April), fuel (44% increase), and food (11% increase). For just these items, if average consumption held steady, households would have seen a $200 increase in costs.

This year’s State of the Nation’s Housing report found that even with record increases in housing starts, demand for housing still far outpaces supply, particularly among the affordable rental stock. To meet housing needs at the onset of the pandemic, developers increased multifamily home starts, though construction was targeted toward the higher end of the market. Developers started nearly 474,000 multi-family homes in 2021, a record 22% increase over 2020, compared to a 14% increase in single family homes starts over the same timeframe. Single-family rental production also reached a high, with 60,000 homes started in 2021 compared to 50,000 in 2020. 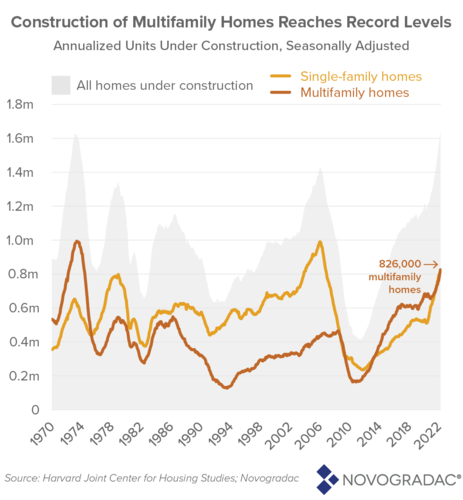 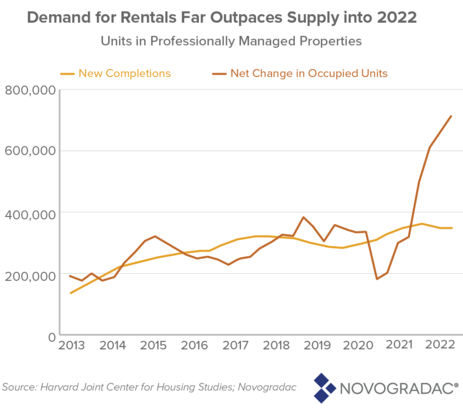 The record increases in construction starts of multifamily and single-family rentals detailed in the report have not necessarily translated to a similar increase in completions. Multifamily completions in 2021 were 371,000 compared to 375,000 in 2020. Overall, completions rose 4.2% in 2021. On average multifamily developments took up to 2.1 months to start and 15.4 months to finish, similar to the pace seen in the previous two years and tied with the record.

JCHS’s report highlights how developers have had to overcome chronic labor shortages and rising labor costs, supply chain issues and restrictive local land use regulations in their attempts to bring new homes to the market. There were also record levels of inflation that affected developers and renters alike. As noted above, households saw significant increases in the price of necessities such as food, gasoline and energy, which increased the burden on already struggling households. Developers also had to deal with price increases–though not as high as the 30% increase in building materials seen in mid-2021, JCHS notes that the 20% increase reported in February 2022 was still seven percentage points higher than the year-over-year increase in February 2021. While the report predicts the rate of completions will increase in the future as supply chain issues ease, in the near term, the “housing markets are likely to remain tight.”

The JCHS June 22 held a release event for the State of the Nation’s Housing report; panelists included Chris Herbert, managing director of the JCHS; Alanna McCargo, president of Ginnie Mae; Ryan Marshall, president and CEO of PulteGroup; Sara Saadian, senior vice president of public policy at the National Low Income Housing Coalition; and Tiziana Dearing, host of Radio Boston acting as moderator. Both McCargo and Saadian noted the Biden administration’s Housing Supply Action Plan. Commenting on the need for additional affordable housing, McCargo encouraged the listeners to review the plan as a means of adding to the supply. Saadian noted the plan shows strategic thinking in the use of transportation dollars to incentivize jurisdictions to encourage better zoning practices. She also commented on the potential missed opportunity that is the reconciliation bill, currently being negotiated in Congress, to address the need for affordable housing.

The panelists agreed that while localities play a role in addressing shortages, states must step in to make sure all jurisdictions are doing their fair share. Saadian, who spoke of the needs of the disadvantaged, noted that while a concerted effort is needed, it is the federal government that can incentivize developers to build housing for that segment that the private market does not, or cannot, address.  Taking everything into consideration, Hebert noted the current housing market presents a “tale of two cities”—existing homeowners are benefiting from continued equity increases and homes still selling despite rising interest rates and inflation, while lower-income and BIPOC households continue to struggle. Still, most of the panelists ended the discussion with cautious optimism on where the housing market will be in the next five years, noting the current focus on the expansion of affordable housing by the administration.

With all the housing issues detailed in the JCHS report, there are currently options on the table to address soaring rents, households’ housing insecurity fears and the housing supply issues that have plagued this country for decades.

The administration’s plan to eliminate the supply gap in five years calls for investments in housing production and preservation, such as those outlined in the House-passed reconciliation bill to increase the annual 9% LIHTC allocation cap among other proposals. Proposals are not just limited to helping renters, but would also create a neighborhood homes tax credit, which along with the LIHTC, could be used in concert with other local and federal funds to aid in the creation and preservation of affordable housing across the country.

Though historic in its efforts to create and preserve housing, this plan requires both regulatory and legislative action to see its provisions implemented. Negotiations are still ongoing on the reconciliation bill; a compromise has not been reached as of this writing, but conversations continue between Senate Majority Leader Chuck Schumer, D-New York, and Sen. Joe Manchin, D-West Virginia. Novogradac will continue to monitor the progression of reconciliation bill negotiations and efforts to advance the Housing Supply Action plans provisions, and will be discussing other potential vehicles to which housing provisions could be attached in this space.

Help Rewriting QAPs Provides Opportunity for Clarity, Simplification
Rising Stars: Novogradac Spotlights Younger Leaders in Community Development
ESG Investing: Where it is Now; Where it’s Headed; What to Do
END_OF_DOCUMENT_TOKEN_TO_BE_REPLACED