4% Floor Continues Increase in Demand for LIHTCs and Bonds 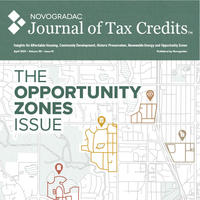 With the pandemic underscoring the need for more affordable housing, low-income housing financing resources have become even more crucial and in demand. Even the 4% low-income housing tax credit (LIHTC), once an underused resource, is now seeing a surge in demand in many states–due in part to a new minimum 4% LIHTC rate enacted in December 2020.

Some allocating agencies are already oversubscribed for 4% LIHTCs and bonds for 2021. Georgia, for example, has seen an uptick in demand and competition over the last three years.

The Texas Department of Housing and Community Affairs (TDHCA) is seeing similar demand. The bond ceiling in Texas for 2021 is $3.2 billion, and the state has already received requests for more than $4.6 billion in PABs, most of which is for Housing.

Teresa Morales, director of multifamily bonds for TDHCA, attributes some of the growth in requested funding to a large number of LIHTC properties that are approaching the end of their 15-year compliance period and were initially awarded at a time when the demand for bond volume cap was high. In addition, Morales notes that the enactment of the 4% LIHTC minimum rate will only further drive the demand under the 4% incentive and the credits initially requested in applications are being updated and the requested amount increased.

Morales highlights another way to gauge demand for 4% LIHTCs and PABs: “In 2019, we provided financing for approximately 7,400 units [of multifamily housing],” said Morales. “In 2020, we approved approximately 16,000 units, and we expect to see that trend continue in 2021 as we already have requests that total 6,000 units and it’s early in the year.”

Washington state also saw developers adjust their numbers after the 4% minimum rate legislation passed. However, the market in Washington for 4% LIHTCs is also very competitive. Over the past two or three years, surging demand for bond cap has required competitive rounds for the first time. In 2020, the Washington State Housing Finance Commission received $1.5 billion in requests for bond cap, roughly double the state’s annual bond cap allocation (most, if not all, of which is allocated to housing).

Overall, these states agree that an increase in bond cap would be extremely helpful.

What More Can We Do?

The enactment of the 4% minimum rate for LIHTCs is a step in the right direction, but state agencies agree that there is more work to be done. The COVID-19 pandemic also underscored the need for state agencies to update their qualified allocation plan, applications and application systems.

“We’re working to get things more online,” said Sojung. “We want to transition to an entirely online application process. We used to demand a thumb drive and notebook, but our staff are no longer receiving those physical copies.”

Another benefit to moving to an online system is the ability to streamline the process of reviewing applications.

In addition to making agency-level updates, allocating  agencies are advocating for more improvements to the LIHTC incentive on a federal level.

“The next thing on our list is to reduce the 50% test [the requirement that at least 50% of a property be financed by PABs to be eligible to receive 4% LIHTCs],” said Jill Cromartie at Georgia DCA.

Tackling the 50% test is also a top priority for other state agencies.

“We’ve worked hard with our congressional delegation to get them to understand the importance of reducing the 50% test,” said Claire Petersky, Manager in the Multifamily Housing and Community Facilities Division at Washington State Housing Finance Commission. “It would help a lot of developments. There’s bipartisan support for funding housing developments, especially where there’s a huge disparity between fair market rents and income levels.”

ESG Investing: Where it is Now; Where it’s Headed; What to Do
Everything You Need to Know about State LIHTCs in 2022
Knowing What Makes a Property Unique, Distinct is Vital in the Preservation of Affordable Housing
END_OF_DOCUMENT_TOKEN_TO_BE_REPLACED