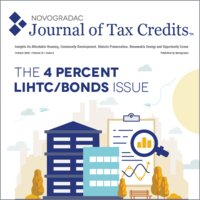 Investors in the 4 percent low-income housing tax credit (LIHTC) equity market appeared cautious at the beginning of the COVID-19 pandemic. However, business continued and the market has settled.

“The market has settled down since mid-March/early April,” said Jay Segel, executive vice president at R4 Capital, a LIHTC syndicator. “What was once a slight pullback [for some investors] seems to have now stabilized.”

“The equity market, in general, has been somewhat uncertain. Large investors like Bank of America have been consistent, continuing to make investments in 9 percent and 4 percent LIHTCs,” said Todd Gomez, market executive, community development banking at Bank of America, which is a primary lender for construction and permanent financing and is an investor in 9 percent and 4 percent LIHTCs. “Smaller investors stepped away in March and are slowly coming back, while large investors have been focusing on quality investments with existing clients. We have been doing deals with familiar financial structures and long-term clients.”

CREA, a tax credit syndicator, was careful at the beginning of the pandemic, but was pleasantly surprised by the market’s resilience.

“Once the pandemic hit and we sheltered in place, we made a strategic decision not to make a fall national fund,” said Charles Anderson, executive vice president, acquisitions at CREA. “However, [one of our other] funds evolved into what would have been our fall national fund and we are estimating that fund will close out at $250 million. I was really humbled and encouraged by that. …  Investors stuck with us and with the market during this period of disruption.”

Equity pricing for 4 percent LIHTC investments has dipped during the pandemic.

“Pricing has come down over the past six to 12 months by several cents,” said Segel. “There are plenty of buyers. It’s just a function of price and yield for many of them.” For national, non-Community Reinvestment Act (CRA) funds, Segel has seen tax credit equity pricing for 4 percent LIHTCs range between 86 to 90 cents per credit. And, for CRA investments, Segel is seeing tax credit equity pricing in the mid- to upper-90s.

Anderson is also seeing a 2-to-3 cent drop in 4 percent LIHTC equity pricing. “The average price per credit was north of 90 cents before the pandemic, including investments from CRA and economic investors,” said Anderson.

Yields, on the other hand, have gone up.

Gomez has seen a similar uptick in yields, between 15 to 25 basis points. “That reflects the change in available capital for financial institutions,” said Gomez. “The yield increase reflects the adjusted risk.”

Anderson observed the same trend. “Yields are anticipated to move up 25 to 50 basis points given the uncertainty of corporate earnings,” said Anderson.

As the pandemic continues to impact the global economy, especially employment, affordable housing rent collections remain stable at the time of this publication.

“Rent collections are going surprisingly well,” said Segel. “A large percentage of our portfolio is covered by long-term Section 8 HAP [Housing Assistance Payments] contracts. Those projects are performing well. We also have a large senior component and seniors tend to be less dependent on employment income. Collections are stable at above 92 percent.”

“We have been pleasantly surprised with collections, which are at or above 92 percent in our portfolio on average,” said Anderson.

Potential CRA Reform Has Not Affected the Equity Market

While LIHTC equity investors are aware and interested in the potential impacts of CRA reform, those concerns haven’t disrupted the market.

“Our experience thus far shows that CRA investors have not been sidelined by the news of CRA reform,” said Anderson.

“This has not impacted our current business plan,” said Segel. “Many investors will raise questions with us, asking how potential CRA changes would impact their investment.”

Bank of America is also continuing with business as usual.

“For us, we have been in the business for years. We have been through up cycles and downturns before and will continue to lend and invest in the affordable housing space,” said Gomez. “It’s uncertain where CRA reform is going and what product requirements are going to be for financial institutions. So we are continuing to do business.”

Private activity bonds (PABs) are a vital piece of a 4 percent LIHTC development’s capital stack. In years past, many state’s PABs went unused. However, as the demand for housing has surged across the country, states are incentivizing the use of their PABs. As a result, some states are reaching their PAB caps.
“As recently as a few years ago, concerns over volume cap were present in a handful of states,” said Segel.

For example, Segel experienced increased demand due to a shortage of volume cap in Tennessee.

“Markets like Tennessee ran into its volume cap issues last year with fewer deals being allocated bonds,” said Segel. “Deals that were fortunate to receive a bond allocation ended up trading at higher than expected pricing due to stronger demand. But, that was a relatively short window. That said, I haven’t come
across that kind of price competition in at least six months. We see a lot of bond deals and there is definitely no shortage of bond transactions going on now.”

“Volume cap has been available in most states that we cover in our national footprint,” said Gomez.  “California and New York continue to be competitive and there has been some concern about cap in a few states. However, I have not seen a dramatic impact on the market overall.”

Looking forward, industry participants would like to see a bill passed to establish a minimum 4 percent floor for LIHTCs generated by PABs. A 4 percent LIHTC minimum rate is particularity important in light of the historically low rates.

“Over the next year, fixing the 4 percent floor is one of the main focal points for our industry,” said Segel. “If so, that would bring more equity into transactions and allow more affordable housing units to be produced. Affordable housing advocates continue to push for it, but it hasn’t gained a lot of traction. Nothing will be accomplished on this prior to the upcoming election.”

Regardless of what happens in the presidential election, LIHTC practitioners don’t think the program will undergo drastic changes.

“I don’t think the corporate tax rate will be reduced further irrespective of the outcome,” said Anderson. “What’s more likely is that rates will remain flat or go up making the tax credit, theoretically, more attractive.”

Segel said that R4 Capital’s investor clients have been asking for additional projections to gain insight into how the anticipated increase in interest rates may affect their investments. “Rather than doing one set of projections, we will now send investors multiple scenarios,” said Segel. “It’s a function of where the tax rate could go and what would that mean for yields and benefits.”