But there is nothing ordinary about the redevelopment of the Ocean Bay Apartments in Far Rockaway, Queens, N.Y.

The New York City Housing Authority’s (NYCHA’s) 1,395 units of public housing are under redevelopment through the U.S. Department of Housing and Urban Development’s (HUD’s) Rental Assistance Demonstration (RAD) program after suffering devastating damage from Superstorm Sandy. Through the RAD program, the public housing units move to a Section 8 platform with a long-term contract, ensuring they stay affordable to low-income households. This is NYCHA’s first RAD conversion. There are 178,000 units of public housing in New York City.

“RAD has been an incredible tool to leverage private capital,” said RuthAnne Visnauskas, commissioner of New York State Homes and Community Renewal (NYSHCR), which provided tax-exempt bonds to the development. She added that New York Gov. Andrew Cuomo started a five-year, $10 billion initiative to create and preserve 100,000 units of affordable housing throughout the state. “We are committed to expanding affordable housing and ensuring that it remains affordable for years to come.”

“RAD is a cost-neutral way to leverage private financing,” said Matthew Rooney, CEO of MDG Design + Construction LLC, the co-owner and developer of the property with Wavecrest Management. The two companies operate under a joint venture called RDC Development. “We applied for this request for proposal because of our passion for preserving affordable housing.” Rooney added that the affordable housing stock has started to dwindle in New York City as many developments’ compliance periods are ending and owners are looking to increase rents by converting properties to market-rate.

The 24-building, 1,395-unit Ocean Bay Apartments were built in the early 1960s and operated as affordable housing since. The restoration will give the development’s roughly 4,000 residents extensive apartment and communal space upgrades, access to ample services, better energy-efficiency throughout the property and storm resilience updates.

“The preservation of our existing affordable housing is important,” said Susan Camerata, chief financial officer at Wavecrest, which manages 20,000 units of affordable housing throughout New York City. Camerata added that Wavecrest properties in New York City have a vacancy rate of 0.75 percent. “The promise of revitalization has brought hope back to the community,” said Camerata.

The property will receive new building systems, including overhauled elevators, new roofs, new roof fans, new electric service, new water tanks, conversion of the existing single steam boiler system for all buildings to 24 individual hydronic boilers for each building, and 618 security cameras. The apartments will receive new bathroom finishes and fixtures; new smoke detectors; new kitchen finishes, including cabinets and stainless-steel appliances; and new simulated wood flooring. In addition, new windows and energy-efficient LED lighting will be installed throughout the complex. Lobbies and public hallways will also be updated with new finishes. Renovations will also include a new playground for the community center and the implementation of a community garden. Solar panels are being installed on the roofs of 20 of the buildings. The array will produce 575 kilowatts of solar generation. 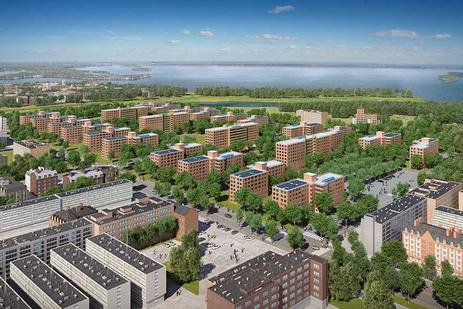 Rooney said that Catholic Charities will have staff on-site to connect residents with services. “Catholic Charities has a network of services that the residents get to tap into,” said Rooney. In addition, Ocean Bay Community Development Corporation will assist in job training. RDC Development will also provide jobs for the residents of the Ocean Bay Apartments, Far Rockaway and the greater NYCHA community.

The rehabilitation of the Ocean Bay Apartments began in December 2016 and has a 24-month timeline. Development partners said construction is going smoothly, as nearly 900 apartments have been renovated and all apartments are anticipated to be completed by the end of the year.

The renovation is already benefitting the community. Rooney said that since renovations began, there has been a 50 percent decrease in crime. In contrast, the NYCHA developments on the two Rockaway precincts have seen a 15 percent increase in crime. “It’s great to have a quantifiable measure of the impact this rehabilitation is having on the community,” said Rooney. Camerata said that 70 jobs, many of which are permanent, have gone to NYCHA residents.

While it is important to update the development after the destruction from Superstorm Sandy, it is equally as important to take measures to try to minimize damage during future natural disasters. RDC Development is doing all it can in that regard.

Renovation plans include putting individual water and heating units on the roof of each building to ensure heat and water will be available during potential future storms. At press time, the temporary water and heating units that were installed after Superstorm Sandy still power the units. Before the superstorm, the development had one central boiler system underground that ultimately flooded. The 24 individual boilers on the roof of each building will be better suited for future natural disasters, said Rooney.

The project will benefit from new emergency generators and flood walls to be installed on the surrounding land which is still controlled, in part, by the housing authority. This will protect the development from floodwaters caused by future storms. To ensure rain water doesn’t flood the interior of the site during a 100-year rainstorm while the floodwalls are protecting the two-square block development from external flooding, retention swales are being built within the site to retain the rain water until the water in the city storm system can handle the development’s excess storm water. Rooney said that the walls will be landscaped to make them aesthetically less obtrusive to the development.

Richman Housing Resources set up a multi-investor fund with $170 million in 4 percent LIHTC equity and $1.1 million in investment tax credit equity. “Getting multiple different investors into a single deal was a challenge,” said Kevin Hoffman, co-president of Richman Housing Resources. Hoffman said the challenge was worth it because it repaired the damage caused by Superstorm Sandy and is taking measures to ensure the safety of residents in the event of future natural disasters. “Ocean Bay Apartments is a great example of the value that the low-income housing tax credit can bring to community development,” said Moshe McKie-Krisberg, co-president of Richman Housing Resources. “We are pleased to have the opportunity to collaborate with the development team and our fellow funders on this fantastic project.”

Citi provided a $213 million construction loan and $18 million in 4 percent LIHTC equity, syndicated by Richman Housing Resources. “It’s not just the revitalization of 4,000 residents’ homes, but this development is also serving as a catalyst for the neighborhood,” said Matt Bissonette, director for Citi Community Capital. Hiring local construction workers was one example Bissonette gave for the positive impact this will have on the community. “Given the size of the deal, our back-to-back loan product will generate a significant amount of savings for this project,” said Bissonette.

Bissonette said this development was atypical given its immense size and the fact that it had a number of government entities working together. Citi was pleased to be a part of such an impactful development that is bringing its thousands of residents “renewed enthusiasm,” said Bissonette

NYSHCR provided $213 million in tax-exempt bonds to the redevelopment of the Ocean Bay Apartments. “We made a major commitment on this project; this development received roughly 10 percent of the state’s bond authority for the year,” said Visnauskas.

“Being able to rehabilitate all 1,395 apartments under one transaction demonstrates the impact of both the LIHTC and RAD programs,” said Charlie Rhuda, a partner in the Boston office at Novogradac & Company LLP. Matt Lockhart, principal in the New York office of Novogradac, said, “Because of these programs, residents now have updated apartments with safety protocols in place in the event of any future storms.” 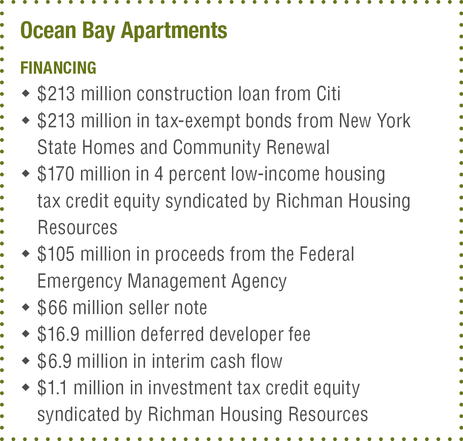