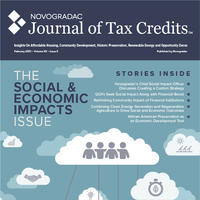 The Jan. 5 election of Georgia’s Raphael Warnock and John Ossoff to the U.S. Senate gave the Democratic Party control of the Senate, House of Representatives and the White House–a dramatic final chapter of a tumultuous, bitter election.

The “Blue Shift” is not as dramatic as a possible “Blue Wave” that would have seen Democrats make significant gains in the House and Senate.  Nonetheless, the sweep by Democrats of both chambers of Congress and the presidency has significant implications for affordable housing, community development, historic preservation and renewable energy tax incentives. There are significant hurdles for Democrats to pass purely partisan legislation under President Joe Biden, but the paths that exist for enacting Democratically partisan legislation are much more favorable than if Republicans controlled the Senate.

Republicans entered the 2020 election with a 53-47 Senate majority, but were defending 23 of the 35 seats at stake in November 2020. Polling favored many Democratic challengers over the Senate Republican incumbents and Democratic challengers often out-raised their Senate Republican incumbent opponents. Those factors led many observers to predict the Democrats would take the Senate Nov. 3, 2020.

While Biden won the presidency, Democrats seemingly took a step back in Congress. The party’s margin in the House dropped from 38 seats to 11 seats (with one open, one undecided) and Democrats initially gained just one net seat in the Senate. However, the two Georgia Senate seats were unresolved, leading to a Jan. 5 runoff election.

Then Democrats Warnock and Ossoff swept the Georgia runoff elections–taking seats previously held by Republicans Kelly Loeffler and David Perdue. That meant a 50-50 split in that chamber (48 Democrats joined by two Independents who caucus with them), with Vice President Kamala Harris available to cast any tie-breaking votes.

It’s a new era in Washington.

The first major legislation affected by the Blue Shift will likely be Biden’s COVID-19 relief bill that could provide a vehicle for further expansion of tax incentive provisions. Beyond that is two years of opportunities and hurdles for affordable housing, community development, renewable energy and historic preservation stakeholders.

Democrats took power in the wake of a year-end fiscal-year 2021 omnibus spending bill and COVID-19 relief legislation with wins for community development.

The Biden administration and the 117th Congress also came into office in an unprecedented time of upheaval sparked by President Trump’s refusal to accept the results of the election and riots by his supporters. However, there is a need to get down to business, starting with the worldwide pandemic.

The first and perhaps simplest method to enact provisions to expand or enhance community development incentives is legislation to provide COVID-19 relief–legislation far more likely to pass a Senate controlled by Democrats.

It will be the first big opportunity for stakeholders to see long-desired provisions become law.

Passage of this and other legislation faces some notable legislative difficulties, based on how the Senate works.

The ability to pass bills that further promote affordable housing, community development, historic preservation and renewable energy became more likely, but enacting laws in 2021 will largely depend on bipartisanship.

A major reason is due to the stance of Sen. Joe Manchin, D-West Virginia, who said he would vote against ending the legislative filibuster–a tool by which Senators hold continuous debate on a topic to prevent a bill from coming to vote. With only 50 Democratic votes in the Senate, Manchin’s position means Democrats lack the majority to end the filibuster.

With the filibuster still alive, the magic number is generally 60. That’s how many votes Senate rules require to end a filibuster and it generally means Democrats would need at least 10 Republicans to join them anytime the GOP uses that strategy.

There is one other option to pass legislation with a simple majority in the Senate: Budget reconciliation, which allows expedited consideration of certain legislation and is not subject to filibuster. However, specific rules make it more difficult and require more time to get it through.

Reconciliation can generally be used for legislation that changes spending, revenues and the federal debt limit (the federal debt ceiling suspension expires in July, although Treasury can avoid breaching the limit for several months beyond July through the use of various financing measures).

The problem for Democrats is the 50-50 split in the Senate, meaning that any of 48 Democratic senators or two Independents could frustrate such an effort. The House could also prove challenging, as the Democratic hold only an 11-member majority in that chamber.

Budget reconciliation provides a pathway to pass a bill without Republican votes, though, and community development, affordable housing, renewable energy and historic preservation legislation could be included in reconciliation-eligible bills.

The continuing presence of the filibuster and the narrow use of budget reconciliation reduces the ability of Democrats to enact legislation without significant Republican support, but control of the Senate remains important.

For starters, a Democratic majority will make it easier for Biden to gain approval for his cabinet and judicial appointments. Control of the chamber also gives the Democratic Party leadership of the Senate and all committees, establishing authority to determine what issues come to the floor for votes and what issues are highlighted in committee hearings and markups.

Democratic committee leaders could force Republicans into uncomfortable positions of voting on issues they would rather avoid, a particularly important development for senators facing reelection in two years. Committee leaders can also draw attention to policies their party wants to advance.

Chuck Schumer of New York is the new Senate Majority Leader and Ron Wyden of Oregon will head up the Senate Finance Committee, the key area for tax legislation. Other key committee leadership roles include Patrick Leahy of Vermont on the Appropriations Committee and Sherrod Brown of Ohio on the Banking, Housing and Urban Affairs Committee.

Democratic leadership of committees is boost for those areas.

Trying to Win the Middle

Democratic leadership in the Senate will need to keep some moderate Democrat members on its side. In addition to Manchin, Sens. Kyrsten Sinema and Mark Kelly of Arizona, Mark Warner of Virginia, John Tester of Montana and even Independent Sen. Angus King of Maine are among those who could be targeted to join Republicans in opposition to some Democratic legislation.

On the flip side, moderate Republicans such as Susan Collins of Maine and Lisa Murkowski of Alaska will be wooed by Democrats on key votes to ensure their passage or increase their majority.

Hanging over all decisions is the 2022 election, when control of the Senate will be up for grabs again. The GOP will defend seats in 20 of the 34 elections and among Republicans set to face voters are several in swing states: Ron Johnson of Wisconsin (who previously pledge to serve only two terms), Chuck Grassley (who may retire) in Iowa and Marco Rubio in Florida. Three Republican incumbents–Pat Toomey in Pennsylvania, Rob Portman in Ohio and Richard Burr in North Carolina–have announced their retirements.

For the Democrats, it’s a friendlier field. Among the 14 incumbents facing voters are just a few swing-state candidates, including recently elected Kelly in Arizona and Warnock in Georgia. Others include Catherine Cortez Masto in Nevada and Maggie Hassan in New Hampshire.

The Blue Shift for Democrats did hit Washington, although it was two months later than many expected and not as forceful as Democrats hoped. But with President Biden and a narrow Democrat majority in the Senate and House of Representatives, Washington, D.C., has a different look.

Whether stakeholders in affordable housing, community development, renewable energy and historic preservation will see their visions fulfilled may come down to negotiations, strategy and moderate Senators on both sides.