The Boutique Hoteliers and Historic Preservation: What Are They Doing Today? 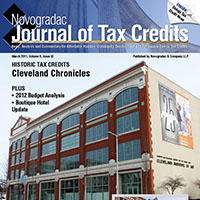 The hospitality industry has always played an important role in our nation’s growth and the urbanization of the United State’s small towns and large metropolitan areas. The industry itself is reflective of the increasing mobility of American society and the modes of transportation used by Americans since the country’s inception. It is also reflective of the country’s economic health. As a result, it is not surprising that the rehabilitation of hotels has played a strong role in the historic preservation movement since the beginning of the federal tax incentives for the rehabilitation of historic properties.

According to the National Park Service, (NPS), 5.6 percent, or 951, of the 16,894 projects approved from 1995-2010 were for hotel use. And, of the $41.76 billion in approved Part 2 projects, 21 percent, or $8.8 billion was for hotel use. (For reporting purposes, the NPS includes bed & breakfasts within the hotel category, although this is not thought to be a large number. Cumulative NPS statistics are also not available prior to 1995). Taking into consideration that these statistics represent only a portion of the projects that have made use of the 20 percent federal investment tax credit for historic properties and do not represent those eligible for use of the 10 percent credit, or those not using that credit, the numbers are significant.

A certain percentage of hotel rehabilitation projects involve the redevelopment of the “grand dame” hotel found in most major cities. Examples range from the Willard Hotel in Washington, D.C. to the Blackstone in Chicago to the Fairmont Hotel in San Francisco. In smaller cities, properties include the Davenport Hotel in Spokane and the Cincinnatian Hotel in Cincinnati. More often, the boutique hotel is thought of as a converted downtown older office, warehouse or apartment building.

Since founding Heritage in 1982, I have had the privilege to working with many hoteliers over the years, including all of the companies listed in this article.

Anyone in the hotel industry knows the concept of the boutique hotel in the United States was pioneered by Bill Kimpton. In the beginning Kimpton envisioned a niche of moderately priced “European-styled” hotels that would provide “weary travelers with a haven of comfort, service, security and style.” In 1981 Kimpton began redeveloping existing small hotels or adapting older buildings in the San Francisco Bay area. His first project was the Bedford Hotel in downtown San Francisco. Over the years Kimpton Hotels expanded in selected markets across the United States and Canada, each time raising the bar of services and amenities.

Pres Kabacoff, CEO of HRI Properties, claims credit to the first use of the federal historic tax credits (HTCs) in a boutique hotel. HRI began in 1982 and has developed 3,487 hotel rooms in the company’s history. Other major boutique hotel developers include Sage Hospitality, Joie de Vivre, Standard Hotels and Thompson Hotels, among others.

Since the 1980s, historic and boutique hotels have proliferated, benefiting from both surging popularity in heritage tourism and renewed vigor in our urban cores. Early on, small hotels, apartments or office buildings converted well to boutique hotels with entry lobbies, vertical access and efficient floor plans. Time and again, these buildings proved to be economical to adapt, and cheaper than new construction. John Rutledge, CEO of Oxford Capital Group LLC, who had been involved in numerous hotel projects in the Chicago area including the rehabilitation of the Cass and Felix Hotels, feels that rehabilitation opportunities offer better “value-added development opportunities” than new construction, especially in a downturn economy. The success of the boutique hotel is unquestioned given that today boutique hotels are found in nearly every community. The renovation of historic hotels is reflected in the National Trust for Historic Preservation’s Historic Hotels of America program, which lists 234 properties across the country.

In the past decade, however, boutique hotels have faced severe challenges. The initial challenge was surprising; the so-called “back to the city” movement created strong demand for older urban buildings. Kimpton’s Joe Long reports that over the years, buildings that would have been prime candidates for boutique hotel conversion became too expensive to convert in light of demands for downtown office and residential space. This was especially true between 2003 and the real estate meltdown in 2008 when the condo boom took many buildings off the market for conversion or speculation. During that period, many hotel development companies focused on hotel management and in some cases looked to ground up development.

With the collapse of the economy in 2008, room and occupancy rates collapsed below sustainable levels. At the same time, room inventory continued to rise as developers with projects under construction had no choice but to complete them. With discretionary income down and employment insecurities up, tourism fell as well. Even developers who were looking to the next cycle could not proceed for lack of financing.

Today the consensus is that the hotel real estate market is returning. Room rates are beginning to rise and vacancy rates are beginning to fall. Many believe that things should return to normal by 2012 or 2013. A stronger economy, an increase in tourism and reduced construction costs are all factors playing a role in a healthier hotel environment.

In fact, as the markets continue to settle, Kimpton’s Long says the he is seeing “old real estate deals that collapsed in 2008 being looked at again.” While the investment market is still not keen on hotels, many hotel developers are ready to acquire existing properties to hold or for later redevelopment. One example of a new project is Kimpton’s Lafayette Hotel rehabilitation in Philadelphia, where, interestingly, many larger buildings are being condominized with a hotel component. This approach was just completed in Chicago with Daniel Burnham’s last designed building, the 1912 Continental and Commercial Bank, where the lower half of the building was renovated into a J. W. Marriott and the upper floors remained offices. Another similar project involves the rehabilitation of Chicago’s Old IBM Building at 330 N. Wabash Avenue.

In this economy it is likely that in the next several years we will see a slow return in the rehabilitation of existing buildings for hotel use. Boutique hotels should pay a big role in this resurgence, given the increase of buildings available for rehabilitation, the value added opportunities they offer, their generally relatively smaller physical size and the potential to put together innovative financial structures. According to some, the hotel cycle moves from acquisition, to redevelopment of existing units to actual new construction. Given that we have just been through one of these cycles the stage seems to be set for cycle to start over.

Thus, the outlook for the hotel industry in the coming years looks significantly better than other real estate sectors. As we all know, the condominium market continues its slow absorption in the face of foreclosures and underwater product. Central city office markets continue to sag as unemployment remains stagnant, perhaps providing other available building product for the hotel rehabilitation market. And, the apartment market, while strong, could change with a stronger housing market.

As our economy returns and the real estate market cycles forward, we anticipate that the boutique hotel will be a major component, and perhaps a bellwether of better things to come.

State Historic Tax Credits in the Year 2020
COVID-19 Impacts on Design and Commercial Real Estate: An Interview with Gensler and Cushman & Wakefield
Tax Implications of a Democratic Sweep in November’s Election
END_OF_DOCUMENT_TOKEN_TO_BE_REPLACED