No roads lead to Noatak.

The remote Alaskan village 70 miles north of the Arctic Circle has a population of 514 and is primarily reached by airplane, snowmobile, all-terrain vehicle or dog sled. However, aided by new markets tax credit (NMTC) investments, Noatak and four other communities in the region are about to feel a lot closer to the rest of the world: They’re getting broadband Internet access for the first time. The native Inupiat Eskimo villages of Noatak, Buckland, Noorvik, Selawik and Kiana will be the latest group of communities connected through the Terrestrial for Every Region of Rural Alaska (TERRA) network, which already serves 44,131 people in 84 communities in western Alaska.

The TERRA initiative was launched six years ago by General Communication Inc. (GCI), Alaska’s largest telecommunications company, to give remote and rural areas of Alaska access to reliable terrestrial broadband Internet instead of the existing satellite connections that were prone to lag. “Lack of access to reliable, high-speed Internet connection is a handicap in the modern technological age,” said Lewis Schnaper, senior vice president at GCI. “Unreliable Internet connectivity can even hamper economic investments and community development because local authorities in technologically underserved areas can face much greater difficulty researching public funding sources, applying for grants and filing reports.”

“There’s definitely a digital divide in this country,” said Schnaper. “Urban areas have amazing access to telecom, but rural areas, native rural areas and low-income populations have a much harder time getting access to broadband Internet. … With so much of modern commerce, education and health care on the Internet, lack of access is real segregation.”

GCI realized that the satellite service available to remote native Alaskan communities was insufficient to keep up with consumers’ evolving needs. “It became clear that we were going to have to spend hundreds of millions of dollars to cover a relatively small population spread out over a huge area, but we couldn’t not do it without basically abandoning most of the state to not even second- but third-rate telecom,” said Schnaper. “We needed to find a solution and TERRA is that solution.”

The TERRA network runs in a 3,289 mile-long ring in western Alaska, which if it were stretched out, would be the same distance from Seattle to Miami. TERRA crosses 233 rivers, 87 lakes and six mountain ranges. This fourth phase of development marks an important milestone: It will close the network loop. “In a telecom network, ringing a network is hugely important because if there’s failure or a technical problem and no ring, any data after that problem can’t get through,” said Schnaper. “Once you have a ring, data can go in either direction.” 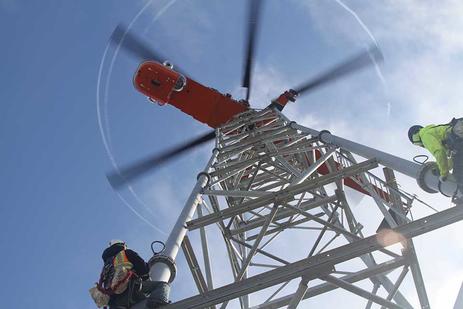 TERRA’s benefits extend to the health care field. TERRA serves 176 health care facilities, enabling doctors to examine and diagnose patients in rural villages over video conference. This promotes preventative care and helps provide more immediate medical attention to patients who may not be able to travel for treatment. Increased bandwidth also gives patients in remote communities access to counseling and psychiatric services via video conference–a benefit that is especially important, considering the fact that Alaska has one of the highest rates of suicide per capita in the country.

TERRA offers public safety advantages, as well. Improved connectivity and coverage gives first responders more reliable service. Increased commerce is another benefit. Giving villagers the ability to shop online opens a new world of products for them. Likewise, they can sell their work and products to the rest of the world.

“This project is a great example of the range of community benefits that the NMTC generates,” said Diana Letsinger, partner at Novogradac & Company LLP, which compiled the financial forecast for TERRA. “Most of us, including the federal court, see the Internet as a necessary utility similar to water and electricity.”

Others agreed about the importance of broadband Internet. “It’s a must-have, not a luxury,” said Michael Bland, community development entity (CDE) manager for Travois New Markets. Travois acted as a consultant to GCI during this latest phase of the project and was an NMTC allocatee in previous phases. “Without infrastructure, you can’t build things these communities need, like better schools, better job opportunities and better health care.”

The latest phase of the project will create 100 construction jobs and 13 permanent jobs, in addition to the new employment opportunities facilitated by the introduction of reliable Internet access.

Building anything in Alaska can be a challenge. Materials are expensive and builders must work with limited daylight and a short construction season. The task of installing infrastructure in some of the most report parts of the state is especially difficult. There are few or no roads between many native Alaskan villages, essentially making each one an island that must have construction material flown in by plane or helicopter.

“The first time I’d ever been there [to Alaska] was to see these sites,” said Bland. “My impression of Alaska [before visiting] was of beautiful mountains, grizzly bears and fish. A large part of the state is that, but another large part is tundra–a treeless, frozen marshland.”

Materials to build service towers have to be flown in by helicopters, which are the same ones used to fight forest fires and must be booked more than a year in advance. Because the locations of the structures are so difficult to reach, the towers are equipped with a fuel tank to keep them running independently for a year or longer. A team of 40 workers refuels the towers every spring. 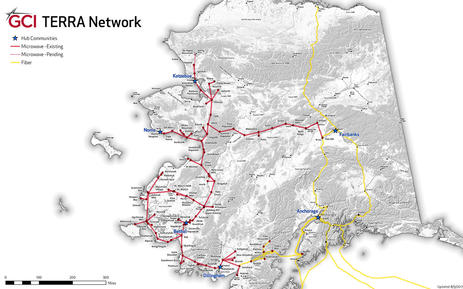 Not all obstacles are posed by nature. Some are bureaucratic. “Much of Alaska is still federal land,” said Schnaper. “Permitting on any kind of development on vast swaths is difficult.” The often lengthy and unpredictable timeframe for permitting can also drive up costs. Another consideration is that GCI’s federal permit for the remote tower sites has several restrictions, including a prohibition from doing site work if there’s a chance of disturbing calving caribou.

GCI expects construction on the current phase to complete in September, with testing and electronic tune-ups done before the end of the year.

Serving a relatively small population in a high-construction cost area was made possible through a private-public partnership. “There’s a clear financial gap in every one of these phases,” said Phil Glynn, president of Travois. “And that has to do with GCI needing a certain return on investment on installing the infrastructure. Because of the low population of these native villages, the return on investment just isn’t there. The new markets tax credits provide the capital that allows GCI to meet their minimum return on investment requirements and extend their services to these communities.”

Clearinghouse CDFI is the sole allocatee in the fourth phase of the project and provided a $10 million NMTC allocation. “I think this was a perfect NMTC transaction for us,” said Jay Harrison, chief investment officer of Clearinghouse CDFI. “Clearly, the NMTC is closing the gap caused by the challenges of serving such a remote population. Furthermore, it addresses our strategic objective of bringing badly needed capital to Native American populations.”

Clearinghouse CDFI operates in California, Nevada, Arizona, New Mexico and native communities west of the Mississippi. The fact that the TERRA project served native Alaskan populations together with the project’s ability to close quickly made it an especially attractive deal for Clearinghouse CDFI. “We first became aware of this great opportunity at the Novogradac [New Markets Tax Credit] conference in late January and were closed before the end of March. We had a great deal closing team,” said Harrison.

U.S. Bancorp Community Development Corporation (USBCDC) has been an investor in all four phases, providing $3.3 million in NMTC equity and a $6.7 million leverage loan in phase four.

“What we sometimes take for granted is immediate access to information when your broadband or Wi-Fi information is literally at your fingertips,” said Maria Bustria-Glickman, USBCDC vice president. “We often forget how inaccessible that same information can be in remote rural areas, especially if the infrastructure that supports that type of information is not broadband. At U.S. Bank, we’re prioritizing equity and inclusion in our assessment of projects and investments in various communities, geographies and for specific populations.”

Now that the TERRA network loop is about to be completed, GCI plans to expand the network even further so that more underserved communities throughout Alaska will have the same access to quality infrastructure as others in the Lower 48. 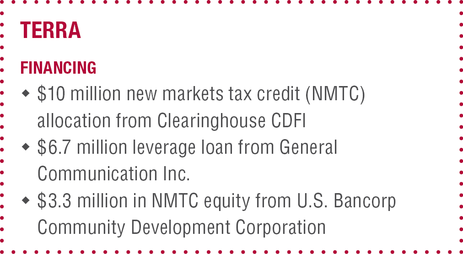 Numerous Priority Issues Have the NMTC Working Group Looking Beyond 2023 to 2025
Urgency, Ambition Essential in NMTC Investments in Fight Against Climate Change
Impact of Food-Related NMTC Investments Can Ripple Through Communities
END_OF_DOCUMENT_TOKEN_TO_BE_REPLACED